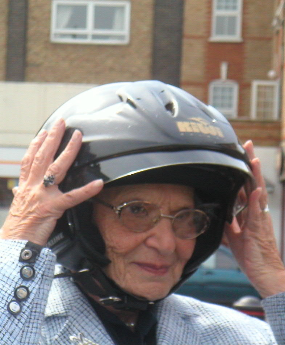 Much of what we know about Mum’s early life came from a hand-written booklet she produced for Marilyn’s fiftieth birthday in which she described the lives of Dad, his parents, her own parents and her own life.

Mum’s father, Alfred, otherwise known as “Gogsie” to us, was born in Hagenau in Alsace and her mother, Hana was born in Yokohama in Japan. Coincidentally they shared the same birth day, but not the same year. She was always known to us as Granny Hana. Granny Hana was the daughter of a German trader and his Japanese wife, Yoshiko. This Japanese ancestry gave Mum a certain exoticism and we have a picture frame containing photos of Mum, Granny Hana and Yoshiko all dressed in kimonos.

Granny Hana and Gogsie met in Berlin. She converted to Judaism and they were married in synagogue in 1922. Mum was born in Berlin on 2nd August 1923.

Mum was brought up and went to primary school in Berlin and, much later in life on a trip to Berlin, Mum showed Judy and me its location.

She made long term friendships: one was Gerry Moore, who she first met when they were being wheeled in their prams and with whom she remained in contact until his death earlier this year. She also made such an impression on one of her classmates that this classmate made contact with her seventy years later.

In May 1933, Gogsie was in London on a business trip when Granny Hana was warned that comments he had made about the Nazis would make a return to Germany a threat to his life. As a result, Gogsie stayed in London and Mum and Granny Hana left Germany at very short notice for Britain seeking refuge. Through the good offices of a relative, she was allowed to stay until permits were obtained and eventually the family set up home in Golders Green and Mum went to school in Wessex Gardens, off the Hendon Way.

Her secondary education was at Holmwood School in Woodside Park where she was the only Jewish pupil and where the other pupils were mainly upper class English girls. She came top of her class despite all the difficulties she had to overcome.

Mum had no brothers or sisters and, by her own admission, was the apple of her father’s eye and probably somewhat spoilt.

When she left school she went to learn shorthand and typing at Pitman’s in Finchley, but she was very much attracted to the film industry and this meant she never finished the course and went, instead, to work in Berners Street for London Films and then subsequently at Denham Studios.

She joined the ATS(the Auxiliary Territorial Service which was the women’s branch of the British Army in WWII) in January 1943 and worked in the pay corps.

In 1953 they bought the house in Farm Avenue, where Mum lived for the rest of her life.

In the same year, she was introduced to our Dad, Manfred, by a mutual friend of his and of Gogsie. Dad was eleven years older than Mum and they first met at a synagogue event at Alyth Gardens. She remarked to her faithful nanny after the event that this was likely to be the man that she would marry.

They did indeed marry on 4th July 1943 at West London Synagogue and they moved to Dad’s rented flat in Belsize Park. Marilyn was born in 1945 and I was born in 1948.

Mum and Dad then moved again to a larger flat in Belsize Park. In 1953 they bought the house in Farm Avenue, where Mum lived for the rest of her life.

In the summer of 1953, Dad’s fashion business secretary left and Mum went to fill in on a temporary basis. The temporary basis became permanent, and Mum worked in one role or another in the City of London until she was 70.

In 1956, Gogsie died at the early age of 56 which was a great loss. From that time on, Mum and Granny Hana became very close and shared their lives and confidences with each other.

In the early years of their marriage, Mum and Dad went on many holidays with their friends, Jack and Magrit Stern and, later in life, had regular weekly sessions playing bridge with them.

Dad became ill in 1962 and was diagnosed with multiple sclerosis in 1965.

Because of Dad’s illness, Mum took on the role of supporting Dad’s mother and father, visiting them each week in Napsbury Hospital near St Albans until their deaths.

Dad struggled on with work for another nine years, but became bed bound in 1974 and died in 1983. Over the period of Dad’s illness, Mum took over all the decision making and became head of the family.

Her immediate family was everything to Mum and she welcomed Frank when he married me, and Judy when she married David. Her grandsons: Jonathan, Jeremy, Simon and Joshua, arrived conveniently at two year intervals – making remembering their ages that much easier. The family grew and she followed their progress with delight, making journeys to Yorkshire, where David and Judy lived, for all the important events for that branch of the family.

As her grandsons grew up, their relationship with Mum strengthened and as they courted their future partners, Mum was sometimes the first to meet them, welcoming them into the family and rejoicing at their marriages.

Great grandchildren followed, and for the third generation, she again followed all their growing up, but was flabbergasted when she realised her great grandsons were already driving.

Mum was an extremely sociable person, interested in people and a good listener. She made many long-standing friendships and close relationships. Some of her friends were known to us, but others are just names who we knew about but never met.

Mum and Dad were regular theatre goers, and Mum’s knowledge of both cinema and theatre made her the Google of her time with people asking her for the “who, what and when” with Mum giving the right answers.

In the 1980’s, Mum began art appreciation classes, visiting many exhibitions, and she started going on holiday with three members of the class. After they went on a trip to Jordan, they called themselves the Petra Four and in total they went on eleven trips together, and Mum said they never had an argument – although Steffi, the sole remaining member of the group, might disagree.

Travelling became her hobby and, as well as with the Petra Four, Mum travelled all over the world with Margot and Henry Wallace, and with Charlotte Michaels and Lotte Freedman amongst others.

Mum did have other men in her life and we have a voice recording of her which David made a couple of years ago telling us, after the usual glass of lunchtime wine, about her early boyfriends and love life.

Mum was very considerate, always thinking about other people and looking from the other person’s perspective and, as part of her caring nature, she volunteered for the League of Jewish Women, visiting women who were housebound and also becoming expert at making sandwiches for the League to distribute.

Her interests, apart from cinema and theatre, were tennis and bridge. She was an avid follower of the game of tennis, making many trips to Wimbledon with her mother and watching the progress of the players in tournaments and subsequently watching matches on television.

She began playing bridge again after a gap of twenty years when Hilde Panke invited Mum into her bridge circle. And after that she continued playing bridge with her set of friends for many years until quite recently.

Mum loved her independence, and she lived alone in her house until only a few years ago when she started having help with bathing and meals. Then in January 2020 the wonderful Grace became her companion and live-in carer.

Mum wrote in the booklet that she had had a truly fortunate life.

We think that, not only was Mum fortunate, but that all who knew Mum would surely agree that they, too, were fortunate and privileged to have known her.