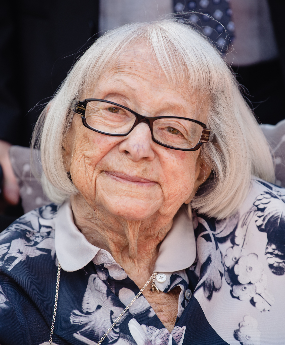 She was born in Holland and served during the Second World War in the Dutch Royal Navy as an intelligence officer. She, her parents, grandmother and sister Sarah (98 to Mum’s 96 years), an aunt Elizabeth (Betsy) and her husband Jules left Belgium before the war and settled in Swiss Cottage. They lost nearly all their family during the war.

Quite how Mum met Dad is a bit of a mystery but we believe she sent him Red Cross parcels during the war as he was interred in several prisoner of war camps, having returned to Belgium to make funeral arrangements and sit shiva for his father who had died of a heart attack on 10 May 1940 when the Germans invaded Belgium. Dad lost his entire family, save his only brother, Siegfried, who was saved as he was in the United States at the start of the war running that arm of the family rough diamond business, Dad being in London and his parents in Belgium.

Sarah, or Saar as she is known, married Achille or Gaggi as we knew him and when Dad came over from the camps to Britain, with pennies in his pocket, he called on his pre-war friend Achille, who introduced him to his sister-in-law Vera and the rest is history. He and Dad had a lifelong business partnership in the rough diamond business. This ran in the family as Mum’s father Jacob also had a lifelong rough diamond business relationship with his brother-in-law Jules.

She had an iron will and a pain threshold beyond belief

Mum and Dad had seven children. Michael, Jack, Philip, Kenneth A”H, Benjamin, Anthony and Robert A”H. Michael is isolating so cannot be with us today. Kenneth, Kenny, died as a two-year old before Ben was born and Robert tragically died in a car crash in his 20’s. She had recently told Philip that even after all these years she thought of them every day.

Mum and Dad had a hard life and pulled themselves up from the ashes of war-torn Britain and the loss and support of an extended family. They were proud Englishmen but Mum and indeed Aunty Saar never lost their Dutch accents and they and Dad and Gaggi used to converse with each other in Dutch thinking their children could not understand.

Mum was a caring daughter, sister, wife, mother, mother-in-law, grandmother and great grandmother. She cared for her father for decades when her mother died all too young. She cared for her husband to his dying day ensuring he was well looked after when she could not care for him anymore and he had to be cared for by Jewish Care and ensured he died, like a mensch, in a new pair of pyjamas.

She cared for all her boys and despite being virtually blind and deaf and left uncomfortable for her last few years, she fought infection after infection – COVID and pneumonia – as she did not want to leave her boys alone without her. Throughout our lives she never moaned about pain, she simply never allowed herself to feel it. She had an iron will and a pain threshold beyond belief. During her midlife, she had numerous stomach operations and came home to care for her husband and boys and put caring for herself to one side.

Her carers are here and the family can never thank you enough for the love, care and devotion you showed her. You called her Grandma and to you she was just that and in return you were also her grandchildren. She loved you all, even if she got a bit grumpy with you now and again.

We shall miss her greatly but all have each other’s love to remember her through.

Hesped Team note: A”H is an abbreviation of the traditional. Hebrew honorfic alav hashalom, which means may peace be upon him.