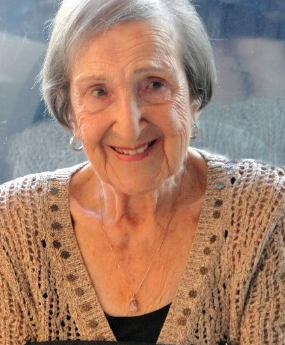 My mother died peacefully after a short illness on 23 October at the age of ninety nine and three quarters. She had had a long and good life, a long marriage, three children, four grandchildren and five great grandchildren. Those few words sum up someone who has universally been described as elegant, involved, upright, committed, interesting and widely known through the many circles in which she moved.

She was born in the East End to a milkman father, well known in the area, and a shoe maker mother. Unfortunately her father died when she was very young and she and her brother and sister were dispersed amongst members of the family. She was an early pioneer for Habonim, spending time on the first David Eder farm in Kent and almost made aliyah to Israel. She met Harry, her husband to be, in 1939 when he fell on top of her jumping into a train at Brighton just as it was leaving. He spent the war working with General Montgomery and was awarded the MBE for what he always described as “helping the General on with his overcoat”. Their early married life was spent in Brighton where they were very involved with the Jewish community raising money for Youth Aliyah.

In 1955 the family moved to Hendon and after a brief spell with the orthodox synagogue, we joined Hendon Reform, “Danescroft” as it was always known and similarly became deeply involved in the community. Trudie and Harry joined Middlesex New Synagogue in 1988 when they moved to Stanmore. Mummy was a regular contributor to Bimah as the reporter of so many synagogue events and helping with the proof reading and postie deliveries too. She was also very committed to the Council of Christians and Jews attending both the local and national meetings.

She learned to drive when she was nearly fifty

She had a wide circle of friends who depended on her for making holiday arrangements and getting bridge tables together. When she took her month-long holidays to see her daughter and family in Florida there would be cries from the friends: “We can’t arrange anything – Trudie’s away.”

Her very early career was with British Home Stores.When the family grew up she returned to work at the local Hendon newspaper where she was the production manager ensuring it appeared on time each week, including meeting Maggie Thatcher, the local MP. When she retired she became secretary to a distinguished social psychiatrist and helped him edit an international journal, working well into her eighties. She learned to drive when she was nearly fifty so that she could drive to see her first grandson, and only gave it up in her mid nineties – fortunately without any argument.

Her niece, who looked up to her as a substitute mother said: “Trudie towered above the rest of us in that very valuable commodity called “good behaviour” by which code she rigorously and graciously lived her entire life. Beautiful to look at and always beautifully dressed, Trudie drew the eye. But more than that she drew the soul; she had the gift of making everyone she encountered feel special and loveable.”

you are my treasures

But I close with Trudie’s own words in a letter written to her three children in 2004 to be opened on her death. “I have had a fulfilled and interesting life and I am content. It was so sad to continue without Daddy [who died in 1997] but he never left my thoughts and dreams. Thanks to the generous support of you three children and your love, my life without his physical presence has been happier than I ever expected, especially with your lovely families. That is why you are my treasures. I leave you with my prayer for your continued devotion and support for each other. May God bless you and keep you.