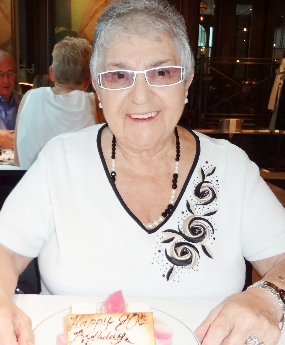 Trixie Lee. My mum, and my dad’s rock.

I know we are here to mourn her passing but I am sure she would prefer and like us to really celebrate her life.

Do not worry. I am going to keep it short and sweet…just like her.

She was born in the East End of London in 1931, the only child to Becky and Harry Placks, and then grew up in Neasden.

She met Gerald in 1948 at a dance and they got engaged in 1950.They married on the 3rd of June 1952, the same day as the Queen’s Coronation.They then celebrated every Jubilee as the Queen did from then on , including the Golden one in 2012 (but she never sent them a present!).

They were looking forward to sixty three years of marriage in June, and many wondered how my dad did it!

They moved to Edgware at the start of their marriage and then I came along in August 1955 and turned their world upside down! She always said I was impossible as a baby, and nothing really changed for the next 60 years! We all lived in Edgware until my Nana Becky (my mum’s mum) needed to move in, which my dad accepted easily. So I moved to Bushey in 1984 and my Nana passed in 1989. They followed in 1997 where they have been, close to me and Barbara and to the shul ever since.

She had trained at Pitmans College doing shorthand and typing and then held down numerous local secretarial and PA jobs.This training eventually gave her the capability to become the computer whizz that she was, as many of you here today will be witness to as recipients of many of her random emails which she loved sending.

the life and soul of the party

Once you met Trixie…you never forgot her…

It appears she endeared herself to everybody and we have had nothing but kind comments from those that she met and paths she crossed.They all said she and dad were their favourites!

She and dad simply adored the lovely Barbara, my “current” wife. They thought she was their Princess Di. She has been a tower of strength to me in this past dreadful month and I could not cope without her. It is especially hard for her as it brings back memories of my late mother in law and her dear mum, the lovely Joy, who shared the same birth year as Trixie and so did her dad Hector who was unable to with us today due to illness, like my dad.

She always made a lasting impression and was the life and soul of the party. It was because of my mum, I am me.Those of you who know me well will understand.

Trixie, my dearest mum and my dad’s soulmate is now at peace.

We will all miss her every day and love her forever.