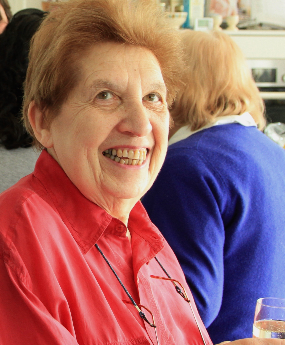 “Well, I won’t be forgotten in a hurry.”

Just one of Mum’s corkers while she was in Barnet hospital last week. The sharing of so much love, fondness, warmth and laughter since she passed away on Thursday night is testament to the truth of her words, and I want to firstly thank not just everyone who is attending in person here at Cheshunt now and at Edgware Reform tonight, but also her many family members and friends further afield who are joining via Zoom. Mum’s dad Michel Serebriany was the eldest of eight children, and her mum Lily Catsell was the youngest of eight, so I am saying hello to a lot of cousins – in Australia, Belgium, both coasts of America, as well as up and down the UK, and good friends in Australia, Israel, as well as Edgware, Stanmore and elsewhere in Britain. Thank you for joining us and making us feel a bit less lonely.

The thing to know about Mum was that she had high standards. I guess these were acquired during her childhood, first in Brussels during the 1930s, then later a small Glasgow flat, after one of the most dramatic escapes from Nazi Europe imaginable. Most of you will know the story – the two boats in Ostend harbour, hiding behind suitcases as the Germans strafed the port with bullets from the sky, getting on the wrong boat, getting off the wrong boat thanks to the family whistle, the captain of the right boat delaying its departure so they could board… Incidentally that set a high standard for drama in her life, one she must have decided it was preferable to try not to meet again, as she always chose the quieter, safer option, at least once World War II was over – she also recounted rushing down into the London underground to sleep when the air raid sirens started, so it wasn’t all plain sailing. Still, once in Glasgow, in an inclusive Orthodox Jewish community, she got herself 5 top grades at A-level, and a fine law degree from Glasgow university, where she was President of the Law Society, before moving to London to work as a solicitor, since her refugee background prevented her entering the diplomatic service she always said was her dream job.

enormous natural warmth and capacity for love and support

She specialised in the unfashionable area of probate, she said, because she could help people at one of the times in their lives when they were most vulnerable, having lost someone they loved. And that help became another recurring theme in her life, long after she’d given up law to raise Rachel and me, having been the breadwinner while Dad set up his postal history business after they were married. She was a caring and generous friend to so many people, a great listener, modest about herself – and her children – and happy for others to take the limelight.

And whilst Rachel and I were regularly exposed to her high standards, it’s absolutely central to everything we all love and remember about Mum to say that she could hold these high standards, demonstrate them, and expect or inspire them in others, without losing her enormous natural warmth and capacity for love and support. These standards weren’t sternly held, she would encourage, she would discuss, and make us see for ourselves the right way of doing things. She was so smart. I honed some of my arguments arguing against her opinions. I have to say, overall, it would at best be a score-draw.

And she could surprise us. One thing we hadn’t ever really considered about our Mum, a glasses-wearing, book-loving ex-solicitor, was that she had really good, and I mean really good, hand-eye co-ordination. She played in the mothers versus sons rounders game at my school one year and it’s no more insulting than any son would be about his mother to say that I didn’t really expect much. She literally won the game for the mums, single-handedly. Neither of us ever lived it down. But I would throw her keys to her across the kitchen, right up until earlier this month, to keep her in training, and she could still, nine times out of ten, catch them just fine.

Once she’d got us off her hands and we were at uni, Mum began engaging more with the wider world, and what drove these moves was always music. She joined the Zemel Choir only in her mid-50s, having joined the shul choir just a few years before, in 1986. Her Zemel concerts brought her huge joy, from the performances themselves and from the pleasure they gave the audience. And being in Zemel took her to places she probably wouldn’t have visited otherwise, such as Auschwitz – and her fellow Zemelites have told us about her upbeat and uncomplaining approach to these sometimes challenging tours. Maybe she was just pleased to be headed to somewhere that hadn’t been dictated by where the nearest stamp shop was, as most of our family holidays had been. Or perhaps it was something more profound…

Through Edgware Reform shul, as both a pianist and singer, she began singalong sessions for the day centre, with Ros Regan and Peter Pollak, which continued on and off until not long ago; and with Ann, Alison and Norma, her three great buddies, she formed Quartissimo, a women’s barbershop quartet that performed for people in care homes, day centres and other charity locations who got great joy out of their humorous songs and shows. These were the years when Rachel and I had to make appointments to get to see her. And these many singing communities also helped her get back on her feet after Dad died 10 years ago. Thank you – your friendships were invaluable to her, and we are sure were a large part of why she aged so well.

Because Mum really did improve with age – she didn’t hang onto old opinions (unlike old receipts, charity appeals and other paperwork…) – and she never turned into the spinster cat lady that apparently as a child she thought would be her destiny. We’ve been told by many of her friends she demonstrated a positive attitude to everything, which is hilarious, as she wasn’t remotely convinced by ‘positive thinking’ – the book she took into hospital was in fact subtitled ‘Happiness for people who can’t stand positive thinking’.

She was prepared to move with the times, and remained open and engaged with the outside world. She loved spending time with younger people – doing educational Q&As for schoolchildren at Belsize Square about her experience of the war and her first-hand knowledge of the Holocaust; helping many talented young singers learn their parts and integrate into the shul choir; and of course, from 1999 onwards, hanging out with her amazing grandchildren, Abigail and Sam. She loved meeting friends’ and cousins’ children too, at family gatherings and Friday night dinners. In all these situations, she never assumed she knew better, she listened, and learned as she taught. And what great lessons: fitting in isn’t the important thing – being yourself is the key. Value people and experiences over material things. Be the best you can be, don’t worry about the others – except when it came to table quizzes, where her competitive streak would always leap out, often with great success!

she did actually swim a width about seven years ago

She did not succeed at everything, though. She kept trying to learn to swim for decades, well into her eighties, although we have eye-witnesses here with us today to confirm that she did actually swim a width about seven years ago, before she realised she wasn’t being supported in the water by Abigail and Sam, and she instantly began to flounder again. But she went back to trying, and that was the main thing, for her, and for the lesson it taught us.

She could also hold a grudge maybe a tad longer than necessary – never against people, just institutions – John Lewis, or the Edgware Broadwalk car park, for cheating her out of a couple of pounds. Her arguments were always grounded in principle, though – and I have to say she tended to be right. She even inadvertently started a campaign by the Evening Standard about 15 years ago when contesting an unfair parking ticket. So in fact it was simply her belief in justice making itself felt. You will be relieved to know that she and the car-park made up only a few weeks ago. John Lewis? Well…

Finally, and this is what makes her sudden passing so hard to take, she remained to the very end a magnificent example of a strong older person. She confounded almost every stereotype. She did not look through rose-tinted glasses at the past. She became more open-minded and flexible, not less. Her jokes got better! (although some of her new friends at B’nai B’rith maybe were not so sure! – “that’s one”…) Her warmth, willingness to do things for people, and delight in the everyday increased. She cared about the world, and the future, and she did not only focus on her own situation and how things affected her. She voted Green at the last election, and was planning to buy an electric car. And she used her experience of having been a refugee herself in the most positive way, making her life meaningful for herself and for others. She was baffled and upset that people of her generation did not see things similarly, especially where they too had been refugees.

And like any refugee, she remained anxious, despite being able to appear unflappable to some. She worried her voice was going. It was not. Anxious that her high standards were slipping – if she forgot anything, she worried she was losing her marbles, something which never happened, even near the end in hospital. But any time we would mention future events, she stressed. “See you at half past three, Mum.” “Please God.” I was only five miles away. But everything was “Please God”. She was over the moon when her grandchildren were born, but she also said, “Ohhhh, one more person to worry about.”

she worked hard to create a life, a really good life, for her family and herself

With most, but of course not all, of her family having managed to escape from Hitler, she knew everything can be taken away from you in an instant. So she remained philosophical and realistic, and so very funny, and she worked hard to create a life, a really good life, for her family and herself. We have not even mentioned going to Premier League football games at Watford with Ann’s mum Elaine Abrahams z”l, just the two of them, in their 80s; her incredible baking and cooking; her tomato plants and the fantastic jars of pickle she produced; her batmitzvah at Edgware and Hendon Reform Synagogue three and a half years ago, which she had not been able to have 70 years before; her riotous opera nights with her dear friend Sonia Shaw z”l; the blow of losing her younger brother Lucien at the beginning of this year, which she bore with incredible fortitude; and there is so much else. But as she might say, “that’s lovely but get on with it”. And she would be right again. Her example focused us on what is truly important, and as I told her last week, we all count ourselves so incredibly lucky and thankful to have been her family, and to have had her as such a big part of all our lives.