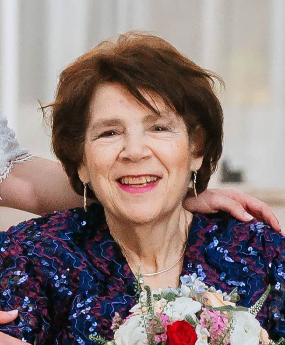 One of the things we learned about my father while sitting shiva for him was that while he was still at home with my mother, the carers used to sneak him treats when my mother was not watching. I have to say, though, that I think he was probably expecting a little more time on his own in the next world with freedom to eat heavenly Magnums before my mother showed up.

To be honest, though, so were we all. As I said many times during my father’s shiva – ridiculous, too, that this is still so fresh in my mind – my father had had dementia, the person we had known had gone some time ago – and so the final departure was easier to deal with. My mother, though – for the first time in my life, I think, I now fully understand the meaning of the phrase “it hasn’t sunk in yet”. It has been almost two days since Andrew called me to tell me, and I have obviously been thinking about my mother a lot during that time, but I do not think I have even begun to comprehend what has happened. Occasionally I feel as if I glimpse small pieces of the loss, but not yet the whole reality.

She constantly surpassed her physical limitations

My mother was amazing. I know you all know that, but I thought I should say it anyway. She was someone for whom nothing was unachievable, regardless of what limitations or boundaries apparently existed. She had multiple sclerosis for around 45 years, and was in a wheelchair for more than the last 10 of those, but for her these were just obstacles to be overcome.

She was first diagnosed in around 1976, and I remember that while the more serious decline in her walking came only many years later, she already had trouble with walking not long after that – to the extent that when we were on a tour to Ein Gedi during our first trip to Israel, in 1981, and the guide announced that anyone who had difficulty walking should stay on the bus, my mother indeed did exactly that. Or so we thought. Just as we started up the trail, my mother appeared beside us, and walked all the way up Nachal David and back.

She constantly surpassed her physical limitations (albeit that she might have found it more difficult to do so without my father, North London’s greatest ever wheelchair-pusher, to help her). Whether it was coming on tiyulim with us, or going into London on the tube – nothing was going to stop her taking part in whatever was going on.

it was only ever my mother and my grandmother

I do not want to give the impression, though, that my mother was just someone who coped well with a physical disability. She came from very little, but through intense dedication, sacrifice, vision, determination and commitment, she achieved so many things.

My mother was born in Glasgow in 1939; as many of you will know, her mother had escaped from Austria, pregnant, a few months previously, and so it was only ever my mother and my grandmother. My grandmother was a refugee bringing up a child on her own, during a war, and it was a tough life. For the first seven years of her life, my mother and my grandmother lived in a single room (my mother’s “playroom” was under the table), with my grandmother only able to work in the evenings until my mother was old enough to go to school. They moved to London in 1947 but still lived in a series of bedsits, and it was not for more than another 15 years that they were finally able to afford to live in a flat of their own.

My mother would say, though, that she never wanted for anything, and in the same way that her mother had sacrificed for her, she would go on to do the same for her own family. My grandmother had taught her the importance of education, and my mother made sure that both her children were able to go to Haberdashers’ (which was a great school, whatever my own children may think of it), despite the financial burden that involved taking on, and to Yeshivat Hakotel as well. And if, because of that, there wasn’t necessarily a budget for other things – well, make them yourself. Before Andrew’s barmitzvah, my mother literally worked for months to crochet the swan decorations at the centres of the tables, and because she wanted the invitations to look like parchment scrolls, wrote them all out herself (this was the 1980s, remember), and singed the corners of each one over the stove as well. And that’s obviously just one example.

She strove for – and achieved – excellence in everything the kindergarten did

I’m now on page 2, and I have not even mentioned the kindergarten yet. I imagine, when my mother started there as headmistress in around 1974, that Kingsbury Jewish Kindergarten was supposed to be for the Jewish children of Kingsbury – there were a few more in those days – and yet within not that many years, its catchment area and reputation had grown way way beyond the boundaries of Kingsbury. She strove for – and achieved – excellence in everything the kindergarten did, and her end of year concerts were, frankly, legendary. As she always did with herself, she pushed the kids to go beyond what one would otherwise have thought was the limit of possibility. Generations of children – including my brother and my wife – passed through her hands at the kindergarten, and I doubt that a single one of them has ever forgotten her.

achieved things of which she would once never have dreamed

I could tell you what an amazing grandmother she was, how she painstakingly made books to help my children read and learn, and how whenever she came to visit us or we went to my parents’ flat in Netanya, she always, always had time to listen to, and read with, all the kids, as if she didn’t need any time for herself. I could tell you how proud she was of her family – her sons, her daughters-in-law, her eight grandchildren and her great granddaughter, and of having achieved things of which she would once never have dreamed, in particular owning a home in Israel and becoming an Israeli citizen. I could tell you how much I have to thank her for, for all her dedication to and love for us, and for so much of what I am today. And I could tell you that it is thanks to my mother that I do not support Spurs.

As I, again, said at my father’s shiva, once corona rolled around, I realised pretty soon, knowing my father’s state of health, that I probably was not going to see him again. With my mother, though, it was always just a question of waiting until quarantine restrictions were lifted, and then I would come and see her. And now I won’t.