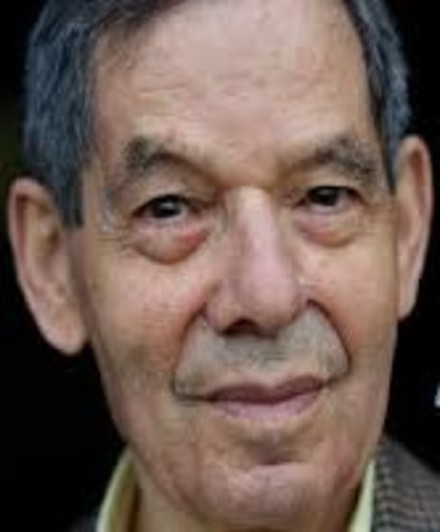 In the early days a lover of zoos, sand pits and blaming his older brother for scraps and cuts. And later a lover of working hard, exacting standards, train timetables and a good metziah, a bargain.

Rudi, or Ruzzi as we fondly knew him, was very much his own man. To those who knew him well; open, engaging and fun loving. And he lived life to the full, he loved life.

Ruzzi’s early life was a happy one. Living in Templehof, Berlin it was a solidly middle class, assimilated, highly educated German Jewish life. In fact, photos we have of the young Dad and Ruzzi in Berlin show them in matching knitted spats at the Berlin Zoo, suggesting a normal childhood and a good family.

Germany changed not long after Ruzzi was born. In 1936 Hans and Rita escaped Germany, taking Dad and Rudi to London for six months. There Ruzzi met his Uncle Rudi and Aunt Lotte. Uncle Rudi was a sporting hero to little Rudi and Dad. Their time in London was spent at nursery, learning some English, football, good sportsmanship and getting a new sibling, with the birth of Eve. The family could not stay in London so Hans moved the family, and their four grandparents to Holland, hoping to be out of reach of the impending doom.

Life in Holland became normal; school, learning Dutch, skating on the frozen canals, beach escapades and more scraps and cuts that could probably be attributed to Dad. Both the boys excelled at school. A-star students in all subjects. Except singing, which eluded them both.

War came to Holland in 1940 with all the restrictions and persecutions. This is not the time and place for the detail of those years and events. In fact there are plenty of videos and write ups to be found online of Ruzzi talking about them himself.

The tragedy of this period for Dad, Ruzzi, and Eve is the murder of their grandparents in 1943 at Sobibor, and then losing their mother and father in January and March 1945 – unable to hold on through the hell of starvation and disease in Bergen Belsen concentration camp, and probably through giving their food to their children over themselves.

Dad always attributed his survival in Belsen to Ruzzi, because Ruzzi could ‘organise’. For instance, Ruzzi got a job in the kitchen; carting the large pots of soup to the barracks. Those who got to carry the pots of soup, would serve it. The soup was of course just a very diluted mixture of vegetable peelings, the odd potato and warm water. Rudi would serve the soup without stirring, so that when it came to their turn to have a bowl of soup, the heavier peelings and potatoes would be there at the bottom to be eaten by kin and close friends. What terrible choices for a small boy to make.

Ruzzi, Dad and Eve did survive. How do you build a new life as a young teenager following such horrendous experiences? Wouldn’t he have every reason to respond to such a brutal world with bitter contempt; to snatch and take from the world everything without a concern for anyone else, because after what happened to you, you deserve whatever you want.

Yet Ruzzi didn’t do that.

All the siblings arrived in London. Uncle Rudi and Auntie Lotte found Ruzzi a home, with Gabs Meyers, and her son, George, very close family friends. He would stay with them for six or seven years, sharing a bedroom with George. He went to Wykeham School and it was the Head teacher there who spotted Rudi’s potential, despite his rudimentary English and helped Rudi move to Willesden County Grammar School for those who had passed the eleven-plus – though of course Rudi had been in a concentration camp when his peers had taken and passed their eleven plus exams.

Ruzzi had immense drive and determination. He worked hard, maybe harder than the rest, to ensure in his now third language he passed his exams

he was somewhat of a legend at Shell – in 1963 he returned from Venezuela and promptly brought an E Type Jaguar.

and went on to City and Guilds, Imperial College London, to study electrical engineering.

He was supported through those early years most especially by Rudi, Lotte, Peter, Nussi, Gabs and George. And he flourished.

It was after university that Ruzzi went on to work at Shell, where he made a long, and successful career.

Having spoken to Geoff McMullen, his boss for five years at Shell and then friend for a further twenty years into their retirements; he said that for those who didn’t work with Ruzzi the first word they might use about him was, a little bit grouchy. He didn’t like to be disturbed when he was hard at work.

But that is not the case with those who worked more closely with him.

Over his career at Shell he travelled extensively. He loved the international nature of the work – spending a lot of time in South America and Asia. In the 1980s he was responsible for the harmonisation of Shell’s operating systems across the world. He flew to different locations and brought together technical obsessives, like himself, to work on and solve problems. He was great at it. Colleagues at that time talk about him as lively and good humoured; and he built-up long term relationships.

His friendships spanned beyond his time at Shell. I have seen his typed out Xmas card list, which is extensive. He lunched with Geoff every three months for the last twenty years. He is deeply mourned by many colleagues.

I also heard that he was somewhat of a legend at Shell – in 1963 he returned from Venezuela and promptly brought an E Type Jaguar. This led to all sorts of rumours in the office. And a great deal of privileges – like he could park illegally with impunity across the site and he got senior leadership valet parking without the directorship.

His home in Vasennaar, Holland which won architectural awards – it was a box on stilts, open plan before it was trendy, with a red spiral staircase through the middle, underground garage and state of the art heating.

Ruzzi’s time at Shell shows a man dedicated, hard working, principled, exacting in all things, a proud Yekke! and it seems adventurous.

He travelled for pleasure as well as work.

In the 1950s Paul and Ruzzi motorbiked across Europe – in the summer on walking holidays in the Alps – small rucksack, woollen trousers and a change of socks, for days of walking. In the winter to ski – same rucksack, trousers but an extra pair of socks.

He delighted to visit the Israeli side of the family in the then developing State. Even spending a spell at the new Technion.

In latter years I think his resistance to a lift home after dinner was due to this same sense of adventure, because he enjoyed the freedom of travelling around on public transport.

In the 80s Ruzzi retired and moved back to the UK to be near to the family.

He accidentally moved into a second career, in Holocaust education. He shared his story with school children across the country, first through Beth Shalom and with the wonderful Smith family; later with the Holocaust Education Trust too.

Dad spoke for ten years and reached over 25,000 school children. Ruzzi has made it past 100,000 if not more, apparently 1,793 talks! Such large numbers, groups of fifty, sixty even two hundred at a time. But you only had to go onto Twitter last night to hear teachers talk about the profound effect that his talks had on individual young people’s lives. There are comments like: ‘he was an extraordinary speaker’, ‘the audience was held spell bound’, ‘he was always generous with his time’, ‘he was good with young people’, ‘he was inspiring to all’, ‘I will never forget his story’, ‘Rudi was a truly remarkable person, who radiated goodness’; ‘I was moved by his humour and courage’.

It is no wonder he was awarded the British Empire Medal for his service to Holocaust education, and chosen to be alongside The Queen on her trip to Belsen just a couple of years ago.

I have covered a little about his early life, his career at Shell and his second career in Holocaust education … leaving just a few words to say about Ruzzi and his place in the Oppenheimer family.

He was always fully committed to the family. He cared sincerely about us all. He did not express this with words but with his actions:

In the years following the War, Dad and Ruzzi were not around each other much. But they shared stamp collecting, a hobby they picked up from their father Hans and Uncle Rudi. They would send each other stamps from different places in the world – often just sending the envelope – no letter or maybe just a short note.

There were his 9am Saturday morning calls to Dad. Not at 8:55 nor 9:03. Both locked into the ritual. I understand this ritual moved on to Jonathan, with a 6pm Friday afternoon phone call.

To the younger generation there was the ‘handshake’ that would land a £50 note in your palm at the end of a visit,a fortune to us children in the 1970s and 1980s. Rudi has been materially generous to us all, all of our lives.

Ruzzi brought Corinne her first, automatic dish washer on one visit when my Dad was out of town on business; he seemed to think it wasn’t right

the only one who could bring us all together – cementing the family bond for another couple of generations.

she did so much washing up. I’m not sure Dad wholly approved as he was for ever emptying the thing and washing by hand.

Ruzzi also gave us his time. There is not a simcha he missed, wherever in the world it took place. In fact there was no fear that he missed any simcha as he was always there early, waiting. He usually beat the rest of the family to their own simcha and for sure was there before the Rabbi. And that was by public transport!

And then there was Ruzzi’s eightieth birthday party in 2011. Gathering eighty plus family members from across the globe to be together in a hotel to celebrate his birthday. We did celebrate his birthday. But the event was more than a birthday party, it was a historic family gathering. He was maybe the only one who could bring us all together – cementing the family bond for another couple of generations.

Ruzzi’s life, his actions speak of a man who embraced life fully.

In saving the peelings in the soup, in working hard to be an incredibly successful engineer, in being at every family occasion and bringing humour, in his generosity, in his work to make the world just a little more compassionate through his talks to school children about his own experiences …

Ruzzi – you lived with your own dark memories and tragedy, and yet grasped life to the full. You commanded respect and admiration from those who met and knew you. You loved life. And we loved you.

We will miss Ruzzi and much will be lost in his passing.

We also know that he will now be reunited with his Vatti and Mutti, with his mother and father; and with Dad and Eve. May your souls be embraced together in the love of the Shechinah for eternity.

And here Ruzzi, with us, your memory will be a blessing in our lives.