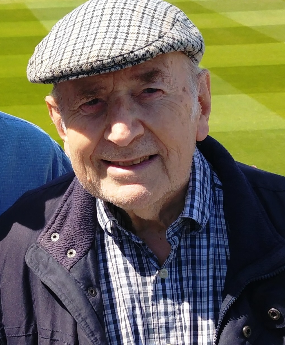 My father was born in Dublin in 1938; he lived in Kenilworth Park, in Terenure, before, like many Irish Jews of his time, moving to the UK in search of a larger Jewish community. He studied at Wesley College, and then at Trinity College, Dublin – whose college scarf, I remember, he wore for many years.

He was a long time gone from Dublin, but you only had to hear him answer the telephone to know that Dublin was never quite gone from him.

He liked everyone, and everyone liked him

He married my mother in 1967, not long after his own mother had passed away, and moved to where she had been living – together with my mother’s mother – namely Clive Lodge in Hendon, just by the North Circular. Around a month after I was born, they moved to Woodland Close in Kingsbury, and there they stayed until 2004, when they moved to Edgware.

I will be forever grateful to my parents for choosing to move to Kingsbury. We lived in a warm and loving home, with a particularly excellent back garden, and were part of a fabulous community, so much of which has remained with me until this day – including, obviously, Natalie.

My father was a chartered accountant for all his working life, in particular as the chief accountant for the Spanish and Portuguese Jewish Community. He was also the secretary of the Machzikei Hadass shul in Golders Green for many years, and the financial representative of Kingsbury Shul – communal responsibility clearly runs in the blood. Indeed, even after my parents moved away from Kingsbury, for some years he still used occasionally to walk over there on Shabbat morning, all the way from Edgware, to help support the minyan.

with the very last ball we saw together, Middlesex took a wicket. It was a good way to finish

I have so many things for which to thank my father. My upbringing, my education – my parents made sure that both my brother and I were able to go to Haberdashers’, and after that to Yeshivat Hakotel, even though neither of those were exactly free – and, of course, my love of sport. My father taught me to play cricket, in the back garden; he took me to Lords’ for the first time in the summer of 1976, to watch Middlesex, and to my first football match, a North London derby, the day before my birthday that same year. We may have diverged in our choice of football teams – a close escape for me – but he, myself and my brother watched and enjoyed a great deal of sport together over the years.

Indeed, one of the very last outings I had with my father was around this time last year, when I was over in the UK, and we were able to go and watch Middlesex at Lords. He had taken me for my first time, and I was able to take him for what I believe was his last time. We only stayed for the morning session (which many people would probably consider to be more than enough), but we sat upstairs in the fresh air with a wonderful view, the sun shone, and with the very last ball we saw together, Middlesex took a wicket. It was a good way to finish.

you never needed to look up the weather forecast, you could just ask my father

My father loved many things. He loved my mother, he loved his sons, and his grandchildren, and his great granddaughter. He loved yiddishkeit, not necessarily in a classically orthodox way, but in a strongly traditional way nevertheless. He loved meteorology – you never needed to look up the weather forecast, you could just ask my father. And he loved Spurs – oh, did he love Spurs. Whenever the foundations of our house shook, you could be sure it was because North London’s second best team had scored.

One of my father’s supreme qualities was to take whatever life had to throw at him, and just to deal with it and to get on with what needed to be done. When he was first told, rather bluntly by a nurse at Northwick Park, that he had a terminal illness, his immediate reaction was just to say something along the lines of “well, who wants to live until 90 anyway?” (my mother’s recollection is that he said “well, that’s OK, I didn’t really want any more children”). And that was just one of the last examples – for as long as I knew him, he just did whatever was asked of him, faithfully and uncomplainingly. Well, except when he got a bee in his bonnet about something, but times such as those stand out precisely because they were so few and far between.

such a good man

My father was such, such a good man. He liked everyone, and everyone liked him. Until very late on, when he was no longer able to, he did all the things around and outside the house that my mother couldn’t do for herself; he must have clocked up an awful lot of wheelchair-pushing miles. And he did it all, as with everything he did, with equanimity, with care, with devotion, and without complaint. He didn’t look for appreciation, or kavod – he just, in his unassuming way, got on and did it. There is so very much we can learn from that.

The last time I saw my father face to face was in February, when Natalie and I took our youngest two to England. In retrospect, we are so thankful that we arranged to go then, since the deterioration in my father’s condition progressed rapidly after that – indeed he went into hospital the night we left, and it was all mostly downhill from there. One evening during our trip, Talya went with her grandmothers to the theatre, so we took Shira and my father to go bowling in Watford. My father just sat watching most of the time, but we also played on the arcade games they had there. While Shira was turning out to be quite good at driving, my father and I played mini-basketball, and at one point I actually got one in the basket. “Well done”, my father said. It was probably one of the last things he said to me. “Well done”. I’ll take that.