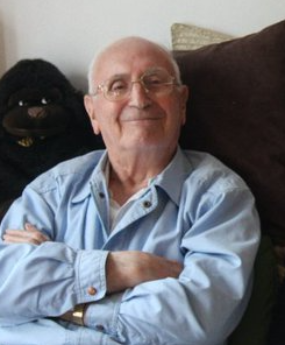 you have, literally, changed the world

On Motzei Shabbat Natan Sharansky wrote “Michael Sherbourne demonstrated that one passionate individual, with no institutional position or backing, can have an impact on the course of history. We will miss him dearly”. This beautiful summation was printed in articles about him that appeared in Ha’aretz, the Jerusalem Post and the Times of Israel. He probably wouldn’t have read the Ha’aretz one, but he would have glowed at the other two. But while Sharansky summarised what he meant to many, and while he was always one of my heroes, we will remember so many other parts of him;

The rave dancer at Gidon’s wedding ten years ago (aged only 87).

The man who continued to learn into his 90’s, taking up computing and Skype when he was a nonagenarian, and attempting to learn Polish from one of the carers at Sydney Corob House.

A pioneer and farmer as well as a political activist and intellectual pedant.

The man who in over fifty years of marriage, never noticed he was eating his meals in a seven day repeating cycle.

It is daunting to attempt to tell his story. First of all because he would want to correct me constantly, and secondly it is simply the most incredible story. Somehow he managed to not just live through the most defining moments of 20th Century Jewish history, but he was a part of them, driving them, doing his little, and not so little, bit.

when the mounted police ranks approached, protecting Mosley’s fascists, he and his friends threw marbles down the street, making the horses fall

His death marks the end of an era. He was the second oldest of four brothers, Lou, Sid, and Cyril, all of whom sadly died before him. The research done by the collective of six cousins has shown that the brothers maternal family have been in the UK since the seventeenth century, only shortly after the readmission of the Jews to England, and were of Spanish descent.

The brothers grew up in the poverty of the East End, and when invited to talk about life in Whitechapel to my Cheder students, they were utterly astonished that he could have lived with one water pump for the street, an outside lav and that they used strips of old newspaper instead of toilet roll. And of course living in the East End between the two World Wars, a teenage Grandpa was there on Cable Street in 1936, when the blackshirts marched. He proudly recalled that when the mounted police ranks approached, protecting Mosley’s fascists, he and his friends threw marbles down the street, making the horses fall; a shocking revelation to a vegetarian teenage me, but an act he was very proud of: The Battle of Cable Street is now considered the point at which British Fascism was nipped in the bud, unlike in Europe.

Michael and Muriel met on a training farm in England, preparing them to be pioneers in Palestine. and they were hurriedly married (initially just civilly until Muriel’s father insisted they return to Leeds for a proper Chuppah – and looking at the photos you would never know it was organised in a week!) This allowed them to travel together to the British Mandate of Palestine as chalutzim, founding kibbutz Kfar Blum and working to help make the desert bloom. Michael worked as a civilian Admiralty Officer with the Royal Navy in Haifa and it was also during this period that Norma was born, in the land Michael adored, and that Norma would return to to build her own family. Before Lana’s birth the family returned to London. She was still a toddler however when they returned to the British Mandate, and in 1948, when the State of Israel was declared, and then immediately attacked, Michael was a member of an infantry unit in the Israel Defence Forces. He was part of the failed attempt to take Latrun- an experience that was clearly traumatic and moulded his politics and his passion to defend Israel.

But despite placing his life at risk for the sake of Israel, it was not a place that the family were destined to stay. After my grandmother contracted TB, they decided to return to the UK where medical provision was considerably better than in the infant state of Israel. Although my grandparents maintained property in Israel for years after this, they were never to fully settle there, generally demonstrating a serious amount of Britishness and finding the heat too much to live with.

Back in the UK, Michael didn’t rest on his laurels though. He trained and worked as a teacher, becoming head of languages having spent time while teaching taking a degree in Russian – qualifying in three years in what was a four year course. He also spoke Hebrew, French, German, Spanish, (which he was able to adapt into Portuguese and Italian) and had a smattering of German. I was sadly not blessed with these language genes, but his great granddaughter Mia, Arielle and Dafna are tri-lingual, and together with Danya, Olivier, Noa, Daniel and Yonatan are heartbroken not to be here today.

The term, ‘Refuseniks’ was, in fact, coined by Michael

After learning about the plight of Jewry in what was then the Soviet Union, Grandpa was utterly outraged and insisted something be done. He was a founding member of the 35’s who campaigned throughout the 1970’s and 1980’s for justice and the release of Soviet Jews, held prisoner and persecuted for being Jewish and wanting to leave for Israel. The term, ‘Refuseniks’ was, in fact, coined by Michael, and he became instrumental in keeping in touch through regular phone calls to Anatoly Sharansky, Ida Nudel, and many others. Sharansky last December, when presenting him with a certificate of gratitude and acknowledgment before a packed Limmud lecture hall, described him as the ‘Internet of the Refuseniks’, a brilliant description considering he learnt to surf the net in his 90’s, enabling him to constantly bombard us with terrible forwards as well as long recollections. So prolific were his activities on behalf of the trapped Russian Jews that when a photo of him was uncovered in a refusenik’s home, showing him on the phone to someone in the USSR, it was pasted across Russian news bulletins, claiming to show a dangerous British dissident ‘Lord Sherbourne’ who was working to undermine Soviet glory. I firmly believe he should have been a Lord, but this has sadly never been acknowledged here, only in the USSR.

In 2009 Laura Bialis made a documentary about the worldwide phenomenon that was the Jewish support for the Refuseniks. Michael was honoured to be included and she wrote to me last night saying:

“I am overwhelmed with emotion … Every time I met Michael, I felt that I was in the company of a legendary hero. He was so courageous, such a fighter. He did so much for the Jewish people and Israel. I truly felt it was an honor to get to interview him”.

It is so important that some honouring is done while people are alive, and I am glad that so many, from Sharansky to his own family and neighbours, were able to have the opportunity to express to our hero how appreciated he was. The challenges of a long life were not few, and the last few months had been particularly challenging for Grandpa. We are told by the incredible staff at Sydney Corob House that last Friday, Grandpa was delighted to make Kiddush for the whole house, and took the opportunity to make a small speech, saying how glad he was to be there. He was joking (and knowing Grandpa, flirting) with the carer who saw him shortly before he peacefully departed, and he, perhaps more than anyone, has most certainly earned his rest.

We all, Norma, Lana, Peter, Danya, Ian, Gidon, Sara, Sarit and I, are grateful to so many friends and family, who visited regularly, shopped, and listened. Special mention must be made of all the cousins, as well as Esther and Edwin Shuker, who have been such devoted fans and carers, as well as Petra, Susan, and of course all the staff at Sydney Corob House.

Grandpa, you are leaving a wide, gaping hole in all our lives, but we are so much more complete for having had you these many years, and you have, literally, changed the world. May we be able to continue your legacy by fighting for freedom, and making jokes (however inappropriate) wherever possible.