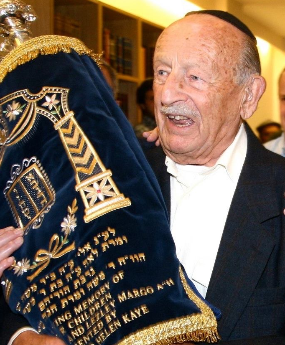 He was a rare combination – he was a real thinker and a true feeler. Let me try and explain what I mean.

Poppa had firm beliefs – in right and wrong, in his faith, his God and his people. He was his own man, very much his own man. He marched to his own beat and didn’t cave in to trends.

He instilled in us the value of pride in being a Jew, in being a Kaye

But he wasn’t just a philosopher. He gave the world’s best hugs. He was so full of life – he was a true life force – and that makes his passing, even at such a great age, still so sad.

His strong hugs were an outward expression of an amazing inner-strength; a fortitude that drove Poppa to success, as a builder of a large, loving family, and of a successful business.

And it wasn’t easy. I know it’s something of a cliché saying that someone came from nothing, but Poppa always taught us never to forget the struggles that he and Grandma went through to give their children, grandchildren and great-grandchildren the best possible life.

Strength is a word I will always associate with Poppa.

He was an exceptionally proud Jew. He demonstrated this throughout his life. He was court-martialled in the Second World War for standing up to anti-Semitism, something that, in his own words, ended up saving his life.

And that’s another strand running through Poppa’s life – he would never admit to it, but he was a deeply religious person; in a very real sense; in a very private sense.

This inner belief was tested many times, but none more so than when he and Grandma lost their son Anthony, aged 4, who rests a few feet from here, and, 42 years later to the day, ג׳ ניסן, their daughter Lezley aged 39.

But, if anything, this strengthened Poppa’s resolve – to be strong and to give strength. He was the personification of what we read last week, and every time we conclude reading a book of the Torah – “חזק חזק ונתחזק – be strong, be strong, we will be strengthened”.

In the last few years, Poppa and Grandma have become something of a celebrity couple – in a few weeks they would have celebrated their 84th wedding anniversary. But this never fazed Poppa. When I spoke to him one evening, after a day surrounded by camera crews and journalists, he told me he didn’t know what all the fuss was about!

This week’s Parsha is ואתחנן, which contains the first paragraph of the Shema. My enduring memory of you, Poppa, will be you standing with your eyes closed, declaring שמע ישראל each week in Shul as the Sefer Torah was about to come out. I once asked Poppa what he was thinking about when he was saying those words with such devotion. He told me that he was thinking about his parents, brothers and sisters and children no longer with us; and the millions upon millions of Jews who uttered those words through the millennia. And how he was the next link in the chain, and how we were the next link in the chain.

Poppa – today, after 106 glorious years, you are joining your family and friends in עולם הבא where we know you will be greeted with open arms, with the best hugs! We will all miss you so much but want you to know that your indomitable spirit lives on in each of us.