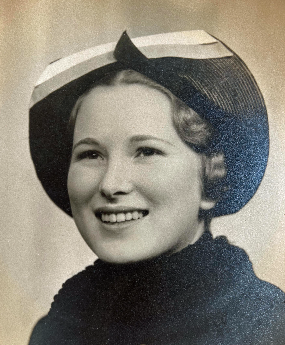 Lulu was born in 1913, the second child of Benjamin and Zelda Goldstein (later Gould). At an early age her formidable intellectual strength showed itself as she won a scholarship to the very distinguished Howell’s School in Cardiff, from which she matriculated at the early age of sixteen with entry qualification to London and Cardiff Universities.

Under the circumstances of the time, however, she did not take her education further, and went to work for her father in the textile trade. She met her future husband Sydney, a Manchester man, in London: on that day he announced to her that one day he would marry her. This was the start of a lifelong devoted relationship, and they married in December 1938.

Their first son, Brian, was born in June 1940, and Sydney turned up in the maternity home with strawberries, starting a tradition in which there were strawberries every year on Brian’s birthday. Sydney volunteered for the RAF in 1941, and Lulu and Brian moved to Porthcawl where she lived with an aunt, partly because Sydney was posted to a base in South Wales. Second son Andrew was born there in 1942, and Lulu coped with both sons throughout the war, towards the end of which Sydney served in Burma. She also trained and served as an ambulance driver.

After the war Lulu and Sydney settled in Cardiff, where Robert was born in 1947, and at last a daughter, Beverley, in 1949. Lulu’s mind was always sharp, analytical and active. She compensated for her curtailed education by taking a great interest in that of her children, for example becoming a familiar figure at Cardiff High School, marching towards the Headmaster’s study to check on the progress of her offspring!

All of her children succeeded in their education, and pursued a variety of careers with considerable achievement. Lulu and Sydney produced sons who became a Senior Fellow at Manchester Metropolitan University, a Managing Director of Marks & Spencer who became a Peer of the Realm, and a distinguished expert in international development; and, though Mum was denied her own education as a woman, she was proud that her daughter became a highly qualified international business psychologist and author. Their children have also enjoyed senior and professional careers, carrying on the tradition.

in her eighties..she took and passed a course in computing, learned how to use Microsoft Word and spreadsheets and databases

Lulu devoted much of her time to charitable activities, with WIZO, the Cardiff Jewish Home for the Aged and the Board of Guardians. In 1995, her beloved husband Sydney passed away: and thus, later in life, Lulu became active in  and secretary of the Alzheimer’s Society in Lewisham. It was during this time, in her eighties, that Lulu took an interest in her computer, to the extent that she took and passed a course in computing, learned how to use Microsoft Word and spreadsheets and databases, and used this knowledge to revolutionise the IT of her Alzheimer’s Society. She also wrote her memoirs on her word processing package, and they were published to everyone’s delight in 2009.

Lulu moved to Walton-on-Thames near to her beloved daughter Beverley, who combined her career as a management consultant with being Lulu’s companion in her old age. She had a happy time in her lovely flat there, and enjoyed attending the Weybridge shul and the activities of JACS (Jewish Arts and Culture Society). Towards her one hundredth birthday she was no longer able to cope independently: her flat was sold, and she moved to Nightingale House where the staff looked after her very well indeed.

her cheerful and positive disposition will be deeply missed

Lulu leaves four children, ten grandchildren, and ten great-grandchildren. Her lively intelligence and sharp analytical mind, as well as her cheerful and positive disposition will be deeply missed. She made a genuine contribution to the world and to the lives of all connected with her, and we regret her passing, but with very many lively and happy memories.