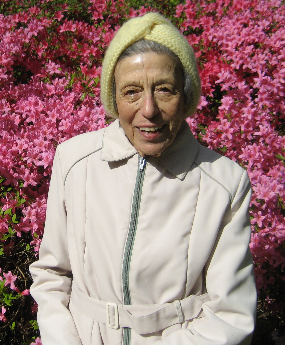 A few hours before Lena’s sudden deterioration in hospital on Thursday, my brother and I were marking the 70th Anniversary of the Blitz by going down the 160 steps to the disused Aldwych station in London and seeing how it was during the Blitz, when people slept not only on the platforms but even on the rails, after the trains had stopped for the night. With hindsight, it was somehow appropriate that we did that ………. because Lena was already 19 at the time of the Blitz in 1940 and I remember her telling stories about wartime. She was brought up in Birmingham which also suffered in the War. She told us about the orange glow over Coventry or when the Addleman family managed to get steak for the first time in months – there was ‘rationing’ of course – only to see the family dog scoff the lot when they were out of the room. (If I remember right, he was an Alsatian called Prince. If I’m wrong then I’m sure Flossie (Lena’s sister) will put me right).

With so many older brothers and sisters, Lena was well looked after

Quite apart from the personal loss, it is sad to see the passing of the generation to whom we owe peace in Europe, the generation who lived through World War Two and in whatever way contributed to the War effort.

It seems appropriate at this point to thank someone else who made a similar journey as Lena, from Birmingham to London – Rabbi Rader – very much for leading our prayers. He is an important part of our lives and a much loved Rabbi, first in Solihull and then in our own shul of Woodside Park, before moving to the South Coast.

Lena was born in April 1921, the youngest of seven. (She was almost exactly five years older than the Queen). Perhaps because it was such a large family, family to her was always important and nothing gave her more pleasure than to speak to and be visited by her two grandchildren, David and Jenny (the reason David is not here is because he is in the Far East). And of course she was closest to her sister Fay, or Flossie more familiarly. Her schooldays were happy although she lost her father at a very early age.

With so many older brothers and sisters, Lena was well looked after. Throughout her life she had that enviable certainty that people would be there for her. And because she had it – they mostly were. That certainty was almost regal – back to the Queen again. Hers was a generation where people were secure in ‘knowing their place’. Deference was the norm, you didn’t question the authorities. And personal matters were personal, you didn’t discuss them on your mobile in the midst of a train carriage full of strangers. In some ways she was puzzled and maybe troubled by the demise of deference and the rise of scepticism about authority. In other ways she welcomed it.

Lena had many talents although she was not one to beat her own drum or blow her own trumpet. Speaking of drums and trumpets, one talent which astonished me was her perfect pitch. She had a lovely voice and could sit at a piano and play any tune despite never having had a piano lesson. It was a truly remarkable talent. She was also very likeable and drew all sorts of people to her. I remember that for years she delivered Kosher Meals around Stamford Hill to elderly Jews, on a Thursday – Meals On Wheels they called it, it does not exist now I think – and there were many people there who looked forward to talking to her just as much as they looked forward to getting the food. Only a couple of weeks ago, she rediscovered an old recipe written on the back of one of her delivery schedules with details like “Mr Cohen – knock loudly twice and wait – he may take a while to answer”, “Mrs Levy – likes breast of chicken, not leg”. It was a very personal, caring service.

To conclude, we all have our own memories of Lena and they are for the most part happy ones. By the three mourners especially, and by her sister-in-law Sue, but by all of us, she – and indeed our parents’ generation – will be sadly missed. Lena was an incredibly thoughtful, considerate, gentle and kind person. And she was beautiful. She was, to use one of her own expressions, “a real sweetie”.

My Sister Lena by her loving sister Flossie:

she was everything a sister should be

My Sister Lena was clever, musical, humorous, beautiful, loving and unselfish – but on top of all this she was extremely modest and private.

She achieved the highest grades at school.

She could play the piano fluently, and play a tune she had only heard once (even when she was only 6 or 7).

She was a true beauty – her dark eyes woo’d many a suitor !

She has always been the most unselfish and giving of people, and has been my close ally and friend throughout my life.

Her humour and repartee is known to all who know her, or even to those who have only met her briefly.

Her kindnesses have made her a true friend to many, and indeed has been like a second mother to those who knew her well.

Despite all these wonderful qualities, she hated all ostentation and bragging.

In short, she was everything a sister should be – AND HOW.