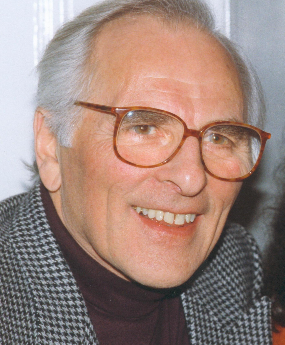 Dad 1923 – 2012.The person that one is at the end of life has to be a sum of the many parts of the life that has gone before. Most of you here today knew Dad one way or another. However when one gets to 88 years old there are very few who can know the complete man and his history. I thought I would talk about dad and expand some themes that ran through his whole life.

a completely unbiased view of Manchester. He simply thought that it was the centre of the universe

Dad was born in Manchester to immigrant parents. His mother came from Russia when she was 14 years old. She could recollect Cossacks coming through the village during pogroms, and consequently had a mistrust of authority for the rest of her long life. His father came from Romania, and was an engineer. He smoked and consequently had a massive heart attack at 55 years old. The doctors put him to bed for two weeks which ensured that he did not survive. I think Dad then realised that being fit and avoiding cigarettes was the way to a longer life. Dad had a completely unbiased view of Manchester. He simply thought that it was the centre of the universe and that anything that came out of Manchester was inevitably something that the rest of the world had benefited from. It was a special pleasure to him that, his hero of later years, Brian Cox, is of course a professor at Manchester University. I wonder if Brian Cox is more rational about the location of the centre of the universe. Dad never attempted to hide his Manchester roots in his accent. He used to have a bath. He went to Pilates. Those of you who ever tried to leave a message on his answerphone will know that “if you wish to send a fax, press the button on your apparatus now.”

After graduating he moved to London to continue his training. Initially he worked and lived in South London. It was only in the 1990’s, following his marriage to Silvia, that he moved into the land of analysts here in North London. The final irony of course is that now, at his final destination, he is at the crematorium which contains the ashes of Sigmund Freud.

he always wanted to be fit

Dad was always obsessed with physical activity. He was not a watcher of sport in general, but he was a doer. The other day my Aunt Tessa told me when she was 7 and my Dad was 12 , she was regularly taken to Heaton Park in Manchester, sat on a bench and told not to move, while Dad ran round the park. I Googled Heaton Park and it’s huge. He continued to run until the early part of this year, although he did admit that his running may have slowed to the speed of some people’s walking. He never did an official marathon. He did occasionally get lost either on Wimbledon Common or on Hampstead Heath and would be out running for three hours or so and therefore probably did do the distance of a marathon on more than one occasion.

I bet many of you will not know that my dad was a keen boxer and represented Manchester University. It is hard to believe that someone who then went on to study brainwaves in both adults and premature babies enjoyed a sport that attempted to flatten these waves. He must have been quite good. His ears remained a normal shape and he did not ever get a broken nose. He continued to follow boxing throughout his life and often used to ask me “did you see the fight last night?” And I always used to reply “what fight?” He loved to swim and as long as I can remember, has been a member of the RAC club, where he swam daily. True to form, within the past year he decided to take swimming lessons to improve his technique and he gained immense pleasure from this. He always wanted to be fit. In the 1960’s he took up the Royal Canadian Air Force 5BX exercise plan. He did these exercises in the hallway for 11 minutes every day. In the 1970’s he found the book by Dr Kenneth Cooper, the founder of aerobics. Aerobics then had nothing to do with Lycra and leotards. He had simply found a scientific basis for measuring his running activity. Reading was another great hobby.

He was a true intellectual in the way that he approached books. This was somewhat difficult for me and Helena as teenagers. When others were reading Leon Uris or James Michener, we were being fed a diet of “the Gulag Archipelago”, “One day in the life of Ivan Denisovich” and, ironically, “Cancer Ward”. These were obviously ideal books for a teenager to read. In later life, but not retirement as he never stopped seeing patients, he continued to find challenging books to read and never novels.One of the books that he forced upon me was a book called Lunar Men. This is not a book about lunatics or astronauts, but a book about the 18th century scientists such as Joseph Watt, Josiah Wedgwood, and Erasmus Darwin who were polymaths (people whose expertise spanned many different areas). Their interest and influence covered everything from building canals to studying the elements in the atmosphere to evolution. Later I came to realise that my Dad would have been an ideal member of this group of Lunar men, since his interests were so far ranging and not simply confined to one field. Later in life he continued to push himself, so joined a book group. This is not a book group that reads Richard and Judy’s latest recommendation. No, their current book is “Iphigenia in Aulis” written by Euripides in 408BC.

when in America during the war in the RAF, he travelled from Canada to New Orleans to visit Basin Street

Another love of dad’s was music. As a youngster he joined the Jewish Lads’ Brigade in Manchester and played the trumpet in their marching band. He continued to love jazz and had a particular appreciation of the jazz trumpet. As a result, when in America during the war in the Royal Air Force, he travelled from Canada to New Orleans simply to visit “Basin Street”. This is the title of a jazz standard as I am sure you know. He loved to dance and was a very good dancer. I am sure that Debbie preferred to dance with Dad rather than me since he was so much better. However there must be something in the genes, as I think that Zach has got his twinkle toes. Dad loved opera. His parents met at an operatic society. He and my mum went to the opera regularly, and he and Silvia continued to do the same. In addition Helena has carried on the operatic tradition by singing as well as listening to opera. He was always open to new musical experiences and was keen to listen to new music that was either classical or jazz or contemporary.

Unlike some, Dad was lucky in love. He met my mother when she was just 20. They married whilst he was a medical student. They had a happy marriage for 43 years until she succumbed to the same illness that finally carried him away.

Having been happily married, he hated being alone. He was lucky to find Silvia with whom he had another happy marriage for 19 years. Silvia came equipped with two teenagers. Dad seemed to steer the challenging path of being a stepfather well. Both Lorenzo and Natasha developed their own special bond with Dad. They have been of great support to Helena and I, as well of course for Silvia in the past few painful weeks. Dad was not only a dad but also a grand-dad. Zach and Dad shared an interest in string theory, Einstein and jazz. With Hannah he talked politics and metaphysical problems. With Silvia’s family, he became a grandfather anew to Ethan, Milo and Emma. Dad was always fascinated by babies and very young children. He gained great pleasure from the special relationship he formed with Eee-than, of course known by Dad as Et-an I think it would be true to say that Dad was not particularly gregarious. In both his marriage to my mum Fay and also to Silvia, the wife led and organised the social arrangements.

He did have a few very good friends that he kept throughout his life. They were boys together in primary school and grew up to become the local Rat Pack. They went to war together, and all came back. The members of this suspicious group included Benny, Baron, Harold, Paul and Dad. Now only Benny remains.

From his South London days he has maintained some deep rooted friendships. John Underwood and “Uncle Allan” deserve special mention as they and Dad all suffered the pain of the loss of their wives to cancer. This shared experience glued them to Dad. In his second life here in North London with Silvia, once again he again formed some special friendships. During Dad’s final illness, Ellie and Malka were constantly there as were Hamish and Renata. They provided both intellectual stimulation and psychological support in his short but final illness.

So what was Dad like as a dad? I do wonder whether having an analyst for a father is the explanation for why I cannot recall him ever raising his voice to either Helena or I. Certainly, having Dad as a dad was sometimes “interesting”. When Helena and I were babies, his interest was in the sleep rhythms of premature babies and he wrote papers on head turning to the light in infants. When Helena and I were at junior school, he ran a ward for young autistic children. When we were at secondary school, he moved into dealing mostly with adolescents. This was a worrying trend. When Helena and I were in our twenties Dad was a contributor and a subscriber to the Journal of Psychosexual medicine. I have often wondered if this was significant? In our adult life Dad moved his interest on, and as you know worked with cancer patients. This could have been a concern for Helena and I. However, in a cruel twist of fate, it was he who eventually became the subject of his own work. He was proud of our achievements and supportive of everything that we did. In turn we are proud of the fact that Dad helped so many people through his work and the respect and love that so many people feel for him. We are both fortunate to have had such a man as him as our father and although we of course would have wanted more time, we are both grateful that he remained such a vital person in all aspects of his life until his last few months.