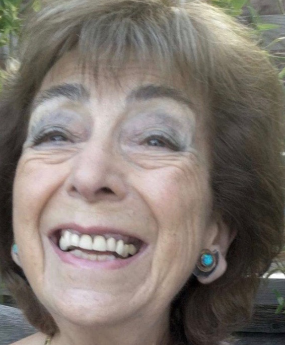 As we, the family, sat with Mum yesterday, I was trying to think how best I could talk about her in a way which would encapsulate everything she was.

And, as some of you will know who have parents who live in the communal public eye, it’s hard to distil in to a few words what binds together the public and private persona of someone like Mum.

But the more I thought about it, the more I realised what it was that lay behind her thoughts, ideals, and actions.

Because Mum was, above all, a fighter.

Her life was about putting every ounce of strength into doing what she believed was right, and overcoming whatever opposition or obstacle she faced.

As a child, she fought for survival really; for herself and for her two younger siblings, Diana and David – both of whom, in her later years, repaid that generosity of spirit in the care and concern they showed to her.

As a teacher she fought for her students, whatever their background, to encourage their achievement at the very highest level.

As a Head Teacher, she fought hard to turn around and build a Jewish school of international repute.

As a Communal leader, she fought for the welfare of the Jewish community, and in particular fought against the scourge of anti-semitism, whatever form it chose to take.

And perhaps above all, Mum fought for equal recognition and respect of women in our community and the wider world.

(I think now it was hardly surprising that when Mum finally retired, the first person to approach her to act as a consultant to a new school he was building was in fact a world heavyweight champion boxer, Lennox Lewis. I think somehow he too recognised a kindred spirit and fellow prize fighter!)

Mum’s forceful countenance could on occasion be very handy

Since Mum’s passing, we have been absolutely overwhelmed by the messages we have received or seen; from pupils, parents, and colleagues from both her school and her wider communal life.

Many talk of warmth, kindness and enduring support as her characteristics. And well, to be honest, many also talk of just the tiniest element of ….fear.

Indeed, there is an ex-pupil of JFS who lives just a few doors down from me, who still ducks and runs past my house whenever she hears Mum was with us for Shabbat lunch. The fact that this ex-pupil is a forty year old mother with three children does not appear to have diminished her fear in any way.

The truth is, however, we probably all acknowledge that, to be able to do what Mum did, you do have to have a “little bit of something about you” to earn and keep the respect needed.

And the fact is, Mum’s forceful countenance could on occasion be very handy to members of her own family in moments of need.

I recall when I was only 8 or 9 years old walking home from school one day to be accosted and set upon by three large and threatening-looking youths from the nearby and much-dreaded St Mary’s School in Hendon. What followed was an unpleasant experience of being pushed and punched, and spat upon, whilst being reminded in a not altogether polite way of my Jewish heritage. Incidentally, the fact our assailants knew we were Jewish was always baffling to me and my friends in incidents like these, since we had always taken such care to cunningly disguise our Jewish identity by wearing our Menorah Primary School caps to conceal the capel we were wearing underneath.

Anyway, after a while I was finally released from the clutches of the St Mary’s posse, and ran home in a tearful state to relate the incident to my mother. Her response to this was immediate, indignant and ….incandescent.

“Right” she said, grabbing my arm, hurling me in to the back of the car, jumping in to the front seat and driving off at great speed “we’ll see about this”.

We then proceeded to drive around the backstreets of Hendon close to where the incident happened and somehow, unbelievably, (and to this day I don’t really understand how), within about 15 minutes she had managed to track down and locate all 3 suspects, who were lurking together in the back yard behind the flats in Vivian Avenue in Hendon.

Without so much as a backward glance at me, Mum screeched the car to a halt, jumped out and ran forward menacingly in the direction of the 3 youths. What happened then was truly extraordinary. As she hurtled towards them, their expressions changed from contempt to surprise to abject terror. Within minutes of Mum beginning her admonitions, all three of these tall and dangerous looking young men had been reduced to trembling, gibbering and emotional wrecks. Yes, they agreed with Mum, what they had done was contemptible. Yes, they agreed with Mum, they were a disgrace and a source of constant shame to their parents. Absolutely, they concurred, it was essential that the Jewish people survive and thrive and were allowed to live their lives in freedom. And no, they concluded, it was inconceivable they would ever perpetrate such acts of evil again. With that, they hastily left the scene of the crime and no doubt pursued honest and G-d fearing lives as accountants and church ministers.

There was also another time when I won a lottery prize draw from a national radio station. The prize was an all-expenses paid trip to America for our whole family.This had to be taken within certain restricted dates only, which unhelpfully coincided exactly with when a major event at work was occurring, which I was partially responsible for organising. Unsurprisingly, my boss was not willing to give me the time off and asked me if I could call the radio station to request they change the dates. Equally unsurprisingly, they refused, citing all kinds of competition rules, flight restrictions and so on. After several fruitless conversations with various senior radio station executives, in which I begged, threatened and cajoled in equal measure, I was finally put through to the senior commercial head, responsible for sponsorships and promotions.

I immediately launched into my carefully prepared diatribe, threatening variously use of force, The Consumers Association and even the EU bill of Human Rights. None of this appeared to be making any impact at all until the Commercial Director suddenly stopped me in mid-flow and asked “what did you say your name was again?”. “Anthony….Wagerman?” I said. A pause ensued. “Are you related to Jo Wagerman?” he asked. “Yes I said. She’s my mother. Do you know her?”. Another long pause. Then a sharp exhalation of breath. His voice again, somewhat quieter and more tense. “She was my headmistress. I’ll see to it right away” he said, then quickly adding “and please don’t tell her there was a problem. ” After which he put the phone down, the holiday was changed, and I never heard from him again.

the most important thing to her was always her family

But however much Mum was feared and revered in the community, the most important thing to her was always her family. She was devoted to Dad and her children, and enormously proud of her grandchildren and their achievements. To have your photograph framed and placed on the “wall of honour” in the hallway of her flat was an accolade awarded only to her grandchildren. In the last few weeks, when I’ve looked at it as I come in and out of Mum’s flat, with its pictures of my daughters and their cousins in wedding clothes, graduation gowns, or passing out parades, I realise that it actually embodies all the values Mum holds dear: relationships with partner and family, education, and the state of Israel and the Jewish people.

Grandmothers and particularly great-grandmothers are not supposed to have favourites of course. But I think we all knew that for Mum, there were two individuals that always sat on a slightly higher pedestal than the rest of us, and brought an extra smile to her face. One was her first and only great-grandchild, Noga, born in June of this year. And the second was Ariella & Josh’s dog, Balfour. Whatever else was going on in her life, and in particular when things felt a bit bleak for Mum, those two never failed to lighten her mood and made her feel that bit better about the world.

As I mentioned before, Mum’s devotion to Dad, especially in his latter years, was truly admirable. As he became more frail, the care and respect Mum continued to accord him every day was exemplary. Many people I think misunderstood the relationship between Mum and Dad, assuming naturally that she was the primary, dominant force, and he the secondary. But those of us who knew them well, realised that it was not as simple of this. Their relationship was equal, and in some ways perhaps now we realise that Dad could be the stronger one too.

On that sad and devastating day of 8th of Tammuz two years ago, when Dad was in the final few minutes of his life, Mum and I sat next to him, with Mum holding his hand tightly. At a certain point, when we knew he had gone, I gently suggested to Mum that perhaps she now let go of his hand. She turned to me and said: “He’s been holding my hand for 60 years. And now I’m holding his”.

In truth for Mum, the last few years of her life have not been easy without Dad. As a fighter, she fought too – sometimes very hard indeed – to preserve her independence and to try to build a new life for herself alone. But I think that, without Dad, her heart wasn’t really in it, and despite the tremendous love and support she had from her family and friends, for which we are so grateful….perhaps it was the one fight she didn’t really want to win.

The Gemara in Taanit says that there were only three people in the Torah who deserved the title of Parnissim – people who provided the Jewish people with the ingredients necessary for redemption. They were Moshe, Aaron and Miriam.

A Targum on this goes on to explain that they earned this accolade because each led the Jewish people in their own special way: Moshe by teaching Torah, Aaron by service as a Cohen Gadol (a high priest), and Miriam, by teaching the women. Mum’s Hebrew name was Miriam, and I truly believe that, just like her namesake, she too fulfilled her role as a Parnis – a provider. She did this for her husband, for her children, her grandchildren, her siblings, her family and friends. She did this for the students and colleagues in her care, and for the wider community. And she too, by the example she set, was a teacher of women.

She did this because it was what she believed in, what she stood for and what she fought for. She truly was an Eishet Chayil, a woman of great valour, and she truly lived up to her namesake.

Yehi Zichra baruch – may her memory be a blessing for all of us.