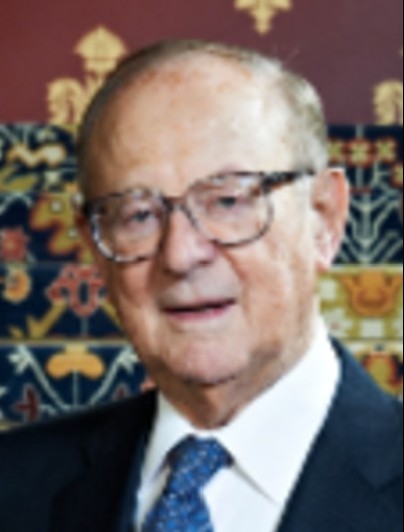 My father was a much-loved man. Like many people he was loved by his own family, obviously by my mother Ruth, by my sister Carrie, by myself and my wife Ruth and by his grandchildren Julian, Izzy, Lucas and Noah .

What distinguished my father, however, is that, as well as being loved by his family, he will be remembered by a very large number of other people,

some of whom he really did not know very well. My father was a genuinely charitable and caring man. My father always saw the good in everyone and focused on their positive aspects, but evaluated everyone by how they behaved to others. In some ways it sums up my father that he used to tell me that you should judge a man by how he treated a waiter, a person who might well be in a position where he could not answer back.

As I said this afternoon, my father had led an amazing life – Germany, Palestine, the UK. From having to pawn his father’s watch, to commercial success, from having his office blown up by the IRA, to tying sheets together to escape from the fourth floor of a hotel fire, he never knew a dull moment. Unlike, however, many successful individuals who claim all the credit for their success, my father always stressed that his own efforts and hard work were only part of the story – he was very aware at numerous turning points, that without luck and the help of others, his life could have turned out so differently.

My father believed life was to be lived and enjoyed to the full. It says everything about my father that his favourite poem was as follows:

“Look to this day

for it is life

the very life of life

In its brief course lie all

the realities and truths of existence

the joy of growth

the splendour of action

the glory of power

Makes every yesterday a day of happiness

And every tomorrow a vision of hope

Look well, therefore, to this day !”

My father’s positive attitude ensured that he had a broad range of friends but one of the reasons that he was so loved is that most people in this room and in fact, numerous relative strangers received from him one or all of the following:

1) One of his books and in due course a second copy if he suspected you had not read the book carefully enough the first-time round; or

2) A cheap alarm clock because after all if you don’t get up early how will you be a success in life?

3) A tie because he wanted you to know that the one you were currently wearing was obviously inappropriate.

4) Or he would tell you one of his jokes and thinking of the joke which he would be about to tell you, he would often laugh so much that he was completely unable to finish the joke itself.

My father also provided excellent advice for anyone he saw. For instance, I am still to recover from the embarrassment of him advising one of my friends that he looked ridiculous in what he was wearing and telling a second friend that his choice of career was ludicrous. Amazingly both of them took his advice and benefitted from it. He also visited many doctors who were surprised to find that he was there to give them advice – indeed, he had to restrain himself from sending them a small fee note afterwards.

Fortunately, my father also provided advice on how we should remember him asking family and friends:

“Do not stand at my grave and weep

I am not there, I do not sleep.

I am the gentle winds that blow

To calm your tired, worried brow.

I am with you, I’m always here

To save you from destructive fear.

When your skies are darkened on a sombre night

Do not stand at my grave and cry

I live through you, I did not die.”