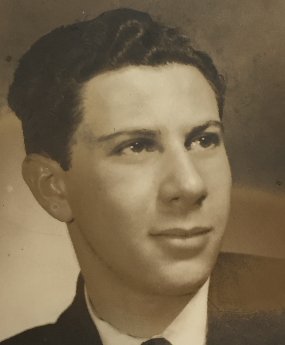 Dad was born on 21 July 1927 and just four months ago celebrated his ninety fifth birthday. His was a full life well lived and always surrounded by the love of his family who were the most important people to him, as he was to us.

Dad was born and grew up in Mile End, later in Leytonstone, in the East End of London. He was the youngest of three children, his sisters having predeceased him by several decades, each in their seventies. In that sense he was not only the last of his siblings but the last of his generation. His mother had died when he was just twelve years old at the beginning of the Second World War. His sisters had already left home, Hilda was twenty three and married, and Pearl was seventeen and enlisted in the British Forces. It cannot have been easy on Dad and his father to get used to losing their wife and mother so young, especially in those unemancipated days, and as the privations of six years of wartime followed.

Dad himself joined the Royal Air Force at just the right time – after the war had ended! He was stationed in Ceylon, now Sri Lanka, where by all accounts he had a fun time.

He returned to join his father as a tailor and that trade stood him in good stead as the ladies’ fashion business was the focus for the remainder of his working life, initially as a travelling salesman, and then as a retailer with shops in Chingford and Woodford.

He married our mother, Hazel, in 1953, rather appropriately at Raleigh Close shul, and I was born in 1957. When my little brother, Simon was born in 1960, our family moved, from Stoke Newington to Chingford where we spent our formative years, growing up in the close knit community of Highams Park and Chingford synagogue in its heyday of the Sixties and Seventies. The shul was much of the focus of our parents’ social life, and is where Simon and I were both barmitzvah, Simon got married and where he is Vice Chairman of the shul.

Sadness struck in 1977 when our mother died of cancer at the age of just forty five, coincidentally forty five years ago just next month. It was just short of Mum and Dad’s silver wedding anniversary, a devastating event in all our lives. Dad undoubtedly thought that he could never find happiness again but a couple of years later, mutual friends of theirs introduced Dad to Barbara and love blossomed for a second time.

Our families had joined forces to become four children, Martin, Debbie, Simon and myself and involved a move from Chingford to Stanmore. Over time the numbers have only grown, now to ten grandchildren and eight great grandchildren, with two more on the way in 2023.

Just last year Barbara and Dad celebrated their fortieth wedding anniversary, an achievement that many people do not enjoy in their first marriage let alone their second. Barbara has been an absolute rock over the years, not least as Dad’s health deteriorated in late 2020, and ultimately his mobility and health issues meant that he became a resident of Jewish Care’s Lady Sarah Cohen home (now Stella and Harry Freedman House) in March 2021. The staff there were exemplary, and loved him. Their care and dedication meant that we as a family knew we could sleep easy at night aware that he was in good hands and in the best place for his needs.

Dad was not an orthodox man but his Judaism was central to him and to our upbringing, with its values and in particular the centrality of family life. He loved nothing more than to be surrounded by his family. In last week’s parsha of Toldot, which means ‘generations’ we read about the offspring of Isaac. The parsha opens Vealeh toldot Yitzchak – these are the generations of Isaac, exactly the same construct as the opening words of the parsha of Noach. Yet Parashat Toldot is not named after Yitzchak, in the same way that Parashat Noach is. Instead, it refers to Isaac’s generations. From this we learn that Isaac was a bridge between his father, Abraham, and his son Jacob. His achievement was not a personal one but one of continuity of generations. Much the same can be said of Dad. He was a modest man and wanted nothing more than to be measured by the achievements that were not personal but for the sake of family. For the sake of the continuity of the generations that preceded him and the generations that will follow him.

The last couple of years have not been easy, least of all for Barbara. Dad was a very smart and proud man, and would remind the staff at the home if his hair needed a trim, or his nails needed cutting. He realised his life was ebbing to a close only within the last few days and it came to us, and perhaps to him, as a relief. Not because any of us wanted it to happen. But because we measure our lives not by the number of years, but by the quality of those years. By what we have been able to build and achieve. Dad can be justly proud of his achievements and what he built.

And we his family will take comfort from the fact that for ninety three out of his ninety five years, he lived a proud life, a dignified life, a Jewish life and most importantly a happy life – a complete life filled with the contentment that comes from the love of family, who were in return a loving family to him.

Yehi zichron baruch. May his memory be for an eternal blessing.

When you hear the word dad you immediately think of a blood relative but our pops was our dad in every single way other than blood. For Martin and I he put a roof over our heads, he fed us, he clothed us, but most of all he loved us with all his heart.

When Dad first came into our lives, Martin and I knew he was a keeper, although we didn’t have a clue where Chingford was and quickly hurried to renew our passports. After a short courtship Mum and Dad married and with Harvey and Simon we soon became the Brady Bunch. All of a sudden we became a family and I now had three brothers to pick on me, tease me and ignore any boyfriend I brought home if they didn’t approve.

we soon became the Brady Bunch

We were so lucky to have our blended family and have each other which I know will carry on even though he has gone. Those days in Chingford were the best of times and will live in my heart always. He made Mum so happy and I will always be grateful to him for caring and loving her as he did.

When I had to go to work full time, Dad became a huge influence on my boys, Josh and Matt. He picked them up from nursery and then school every day with a big smile and a Werther’s Original! They idolised him as he did them and they did everything together. He was their role model, mentor, best friend and grandpa all rolled into one and the three of them had an unbreakable bond that the boys will treasure for the rest of their lives. It broke his heart to see Matt so ill and cried every time he asked me about him when he was in the home.

He loved Martin and I unconditionally and with me being the only girl I was very much a daddy’s girl. We shared the most special father-daughter relationship which together with Mum has made me the person I am today. He used to phone me all the time to ask me to do things and I would always say to him, “Why do you always call me, are all my brothers busy?” and he would simply reply “My Debs will do it”.

Dad, you have left a huge void in our lives but our lives are richer for having you in it for as long as we did. I love you with all my heart and I will be eternally grateful for you loving Martin and I as only you could. I only hope you knew what you meant to us too. May your beautiful soul now rest in peace with no more suffering.