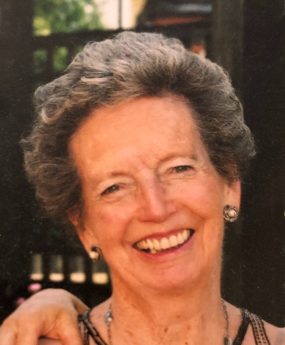 Courtenay Avenue is not what it once was. When Hazel and Sigi first found Branksome, it spoke of unflamboyant, unpretentious, English middle-class achievement. Branksome was Bournemouth, where the family were to spend happy holidays, not somewhere long haul, exotic. That defines the Hazel Sternberg story.

Hazel was born in Buckinghamshire on 13 December 1927, the daughter of a Welshman, Everett Jones, who made a pioneering impact on the advertising industry. She was a bright and independently-minded girl. The war disrupted her schooling but, despite that, she won a place at the London School of Economics and earned a sociology degree. Hazel trained as a social worker but went off to Israel in pursuit of love. She found it in Jerusalem in the shape of a young Orthodox Jew, originally from Hungary, by the name of Victor Sternberg. Hazel was not Jewish then but readily converted, under the tutelage of the famous Rabbi Solomon Schonfeld of Adas Yisroel and Hasmonean fame, who was related to the Sternbergs. She married Victor and they had two children, Ruth and David. Tragically, Victor died young in 1963, leaving Hazel on her own and largely unsupported, with two small children. Life was lonely and tough but Hazel was strong and determined. She battled through, providing, with the help of Mathilda Marks ad JFS, love, care and education for Ruth and David.

Some years later a cousin of Victor’s, whom she had known almost as long as she had known Victor, resurfaced in her life. His name was Sigmund. He was also on his own with somewhat older children, Michael and Frances. They married in 1970. Hazel Sternberg became Hazel Sternberg and they made their home in Courtenay Avenue.

She moved from social work into marriage guidance counselling

Hazel was and remained a bright, independent, principled woman. She never let go of who she was.She moved from social work into marriage guidance counselling and trained with Relate in those now distant days that I remember very well when it was the National Marriage Guidance Counsel based in Rugby. She made a significant contribution to Cruse, becoming a skilled and highly respected bereavement counsellor. Indeed, Hazel was heavily involved in supporting the victims of both the Kings Cross fire and the Marchioness disaster. Later, she established Cruse’s bereavement centre in Highgate which she ran until she was in her mid-seventies. She was a JP but never a Jewish Princess.

At one point Hazel contemplated training as a speech therapist but, by this time, the focus of Sigi’s attention had moved from his metal and property businesses to the interfaith business. And whereas he could manage the former on his own, he needed Hazel for this even more challenging sphere of work.

Dame Commander of the Papal Order of St. Sylvester, the only Jewish woman ever to be so honoured

I came to realise that Hazel played Sir Humphrey to Sigi’s Jim Hacker. Sigi may have opened the doors but he wouldn’t have been able to tell who was on the other side were it not for Hazel’s memory for names and organisational ability. As in ‘Yes Prime Minister’, we all know who the front man was. But those of us in the know have never been in any doubt as to who kept him out front and on the right lines. When Hazel was appointed a Dame Commander of the Papal Order of St. Sylvester, the only Jewish woman ever to be so honoured, this was not something that Sigi organised but recognition of Hazel in her own right.

I want to take you back to my description of Hazel as a young woman, bright, independent, direct. And my portrait of Branksome, well-heeled, middle-class. You might conclude that Hazel was all of those things but nothing more. You would be quite wrong. Beneath the business-like exterior was a woman of deep feeling and an unusually high degree of empathy. That above all else enabled her to cope with a life full of demands, the premature death of Victor Sternberg, being a single mother, at forty plus taking on the challenge of bringing together two quite different families. Oh, and living for more than forty years with Sigi.

My dear, dear friend Sigi, your drivenness has never been easy, even for the many of us who love you but find ourselves in telephone or email range. Hazel coped, not the least because beneath the formal exterior was a woman who adored and admired her husband, loved her family and really cared about people. Social work, marriage counselling, bereavement counselling, working in the office at Star House on interfaith projects, understanding and loving Sigi tells you about her truest qualities. Hazel was the perfect partner for you, Sigi.

Let me say to Ruth and Noam, to Elinor and Jonni and Debora (shedding tears for the passing of her grandmother somewhere in Panama) and to David and Anna, Freddie and Nell, you know what a wonderful mother and loving grandmother Hazel was. She was never ill until these last years of undignified decline. But it is not the last years that you will remember.It is the unswerving commitment, loving and caring without which you would not be who you are.

But back to you, dear Sigi. We men always expect to go first. We never seriously plan for this situation and it is devastating. How on earth do you carry on when you are cut in half? But we have to and we do. Because Hazel would have expected it. Because you have Michael and Janine, Rachel and Chris, Daniel and Lizzy and Sarah, and Frances, and Ruth and Noam and Elinor, Deborah and Jonni and David and Anna and Freddie and Nell not to mention the wider Sternberg clan and the Pearlmans and the Weisses and all those countless people I have not named. To will you onwards, ad meah v’esrim. At nearly ninety three, we still wish you, dear, devastated Sigi – long life.

Remembering Hazel today I wanted to draw attention to her life of voluntary work in areas where there were at best only rudimentary statutory services. And in particular in her work as a bereavement counsellor.

She was already a very experienced counsellor with Cruse when the Kings Cross fire of November 1987 occurred and she and a group of counsellors offered one to one intensive support to the bereaved families. The effects of bereavement are intensified when death happens in exceptionally traumatic circumstances and she continued to offer support in the years following.

She was also a Counsellor for the bereaved families in the wake of the Marchioness disaster, in August 1989.

The North London bereavement service was run from her home

And it was this incredibly valuable and challenging work that led her to establish an independent bereavement counselling service for the boroughs of Haringey, Camden and Islington, all with pockets of deprivation and strong concentrations of populations from other towns and countries and with their roots in different cultures and faiths.

The North London bereavement service was run from her home and she recruited and provided support and supervision for a group of trained counsellors from different ethnic groups and walks of life.

This new free service aimed primarily at a younger clientele usually with little family or community ties offered counselling to several hundred people after the loss of a significant person in their lives.

her compassion, empathy and wisdom was perfectly suited to her interfaith work

A very hands on and greatly missed grandma, once a year she took myself and my children Elinor, Deborah and Jonny to a Christmas show and for many years a lovely girl called Theresa accompanied us. Our children were lucky enough to go to the theatre fairly often but for Theresa this was an annual treat. Only years later did Hazel tell us that Theresa lived with her grandmother as her own mother had been murdered by her father who was serving a life sentence in prison.

Supporting young people to deal with such tragedies was part of her unsung work of which I am very proud and she continued to run the service from her home until she was in her late 70’s.

Of course her compassion, empathy and wisdom was perfectly suited to her interfaith work that she and my father Sigi promoted so strongly. She loved the travelling and meeting diverse and interesting people and in her later years until untimely illness she worked alongside my father in his office in Star House supporting their many interfaith endeavours.

She is greatly missed.