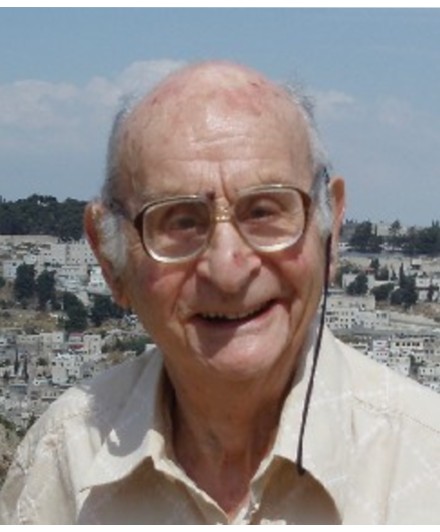 Harold died in the early hours of Shabbat morning after a three week encounter with pneumonia. He was less than a month away from his 97th birthday. From Saturday until now is a long time by Jewish standards and it gave me more than the usual opportunity to talk to people about Harold. I like to give a Hesped a little bit of spice – something from the real world. Harold was a past Chair of the Public Relations Committee of the Board of Deputies, a past Chair of the Reform Synagogues of Great Britain and, most notorious of all, a past Chair of the North Western Reform synagogue, Alyth Gardens. Despite the legendary kindness, individual modesty and lack of back biting within the Jewish community, that should have given plenty of scope for people to offer critical views of Harold – on a confidential, non-attributable basis, of course. But, uniquely in my more than forty years of rabbinic experience, I couldn’t find a single person to say anything but good, kind, admiring things about Harold. Several people said to me that he was a mensch. He was. But he was actually a mensch plus. Or even plus plus.

a concern for social justice and for immigrants

Harold Langdon was born in the East End of London on April 22nd 1916. His parents were called Selina and Abraham – so now you know, if you didn’t before, after whom, faithful to Jewish tradition, his only daughter is named. Harold had an elder sister called Ruth who never married but became a stalwart of the Guilds and of the struggle to rescue Soviet Jewry. The family moved first to the West End and then to Golders Green where almost the whole of Harold’s life was played out. He had his Bar Mitzvah at Golders Green Synagogue where he was asked to sing a few notes when practising his portion. It was decided that it wasn’t essential to chant and reading would be fine. It’s a characteristic I share with Harold and therefore doesn’t constitute a blemish. He won a scholarship to Westminster City Grammar School and went on to The London School of Economics where he preceded Ralph Miliband but shared his socialist sympathies – particularly a concern for social justice and for immigrants to our society, values which he never abandoned.

The war brought a premature end to his training as an accountant and took him as an anti-aircraft gunner to places as varied as Parliament Hill and the Orkneys. Even more exotically, he visited Leeds, where he met the love of his life Esther – youngest of a family of ten from Russia via Hull and Sheffield – who was entertaining the troops in the Unity Theatre. From her earliest childhood ventures into musical theatre until her professional performances when Harold was already in a wheelchair and well into his mid-nineties, Harold never missed a single production that his beloved granddaughter Miri was in. He adored it and it must also have carried echoes for him of his earliest memories of Esther. The Langdons married in Leeds in 1943, moved down to London and, in 1947, bought the house at the other end of Hoop Lane with which we will always associate Harold, Esther and Ruth. In 1949 the Langdons joined Alyth – 64 years ago.

Harold ran a property company and that gave him the opportunity to retire completely in the 1970s and devote himself to communal work – Alyth, RSGB, Leo Baeck College, the Board, CCJ, and Rotary. I got to know Harold properly when he and I both served on a committee which met at 85 Hamilton Terrace and Lord Jacobovitz was the orthodox Chief Rabbi. The committee, which lasted for many years, was a total subterfuge. It had been set up ostensibly to look at matters relating to our relations with the Christian community but was actually a very early attempt at dialogue between the Progressives and the Orthodox. Harold enjoyed it because he believed deeply in trying to create a more constructive and cooperative community – and because his background, coupled with a passionate commitment to Reform Judaism, gave him a relevant and valuable set of skills. Harold pursued this objective, as he pursued all other Jewish communal objectives, with clear sight, determination, commitment and utter integrity. He didn’t smile at people to their faces and bad mouth them behind their backs, so few people ever did that to him.

Harold was part of a holy trinity of Alyth Chairs who went on to become chairs of the RSGB and laid the foundations for a Reform Movement – providing the securest of platforms on which youngsters like me could build. The second was Jeffery Rose who declared his intention of standing for Chair to Harold and to whom Harold responded by saying: “Carry on being yourself, Jeffery and I’ll take care of the election.” The third was Jerome Karet. Alyth won’t be the same with one of the three of you missing.

Harold watched the development of the Reform Movement – in latter years from his wheel chair but regularly at Alyth – and gained enormous satisfaction, always giving the credit to his successors. Our mutual respect and affection, his unflagging encouragement meant everything to me. When I visited him for the first time in the Royal Free he was miserably weak and short of breath but still asked me how my book was coming on.

Family was more important than anything to him

All of that, though significant, was the least important part of Harold. I went round to see the Langdon six last Sunday – Selina and Andrew, Ruthie and Adam, Miri and Ben. Each of them wept at their loss, each of them laughed amidst their joyous and admiring memories – and each of them said that Harold was the best father, father-in-law, grandpa (actual or by relationship) that they could ever imagine. They spoke of how Harold made them feel the centre of his universe. They each spoke of the lengths that Harold went to to support them and be with them. They spoke about his complete and utter giving of whatever was asked of him by his family. ‘Family was more important than anything to him’ – write that down, said Ben. As Ruthie and Miri said, it wasn’t just them, it was their friends who realised that Harold was a person quite out of the ordinary – a grampa plus plus, a father-in-law plus plus, a father plus plus, a husband plus plus.

I hope the six of you will share your memories tonight and on Saturday night. Andrew was so eloquent and so moving in talking about the selflessness, devotion and dignity with which Harold responded to Esther’s last terrible illness.

Harold even judged his leaving to perfection. Having – thanks to the truly remarkable, extraordinary devotion of his family – retained his independence to the very end, he was not happy with his helplessness in the Royal Free. They were planning to move him to a Hospice when I saw him last and I left saying “I’ll see you in the Hospice, Harold.” “I hope not”, he replied. When a man’s got to go, if he’s Harold, he lets go. The loss and the sadness are ours not his.

I’ve just thought of a second blemish. Not only couldn’t Harold chant his Bar Mitzvah portion but he loved Spurs and never stopped talking about his surprise 90th birthday party at White Hart Lane. What can I say? Even the mensch to end all mensches – the mensch plus plus – was blemished. Harold, we’ll miss you so much but you and your example live on and shine out of your family. May your unwavering faith be rewarded and may you be re-united with Esther in eternal peace.