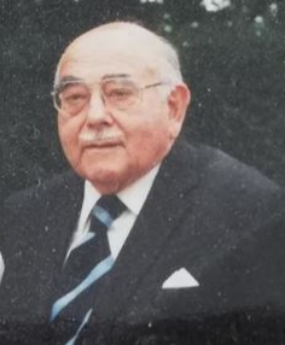 We all have our own very well-defined memories of my father Harold because throughout his eighty years he never failed to make an impression on all who met him. His was the true “magnetic personality”. And he touched the lives of so many people because he had the wonderful gift of being able to converse with anyone and everyone and of achieving a meeting of minds with a complete stranger within no more than five minutes of the first contact. Indeed nothing gave him more pleasure than human contact.

Moreover he could make the contact in many languages, including French, German, Russian, Yiddish and Ivrit. In this sense Harold was a true “man of the people” – there was seemingly no-one to whom he could not relate and with whom he could not find common ground.

He was also an instinctively good judge of people. He could spot insincerity a mile off and it made his blood boil. He was a born campaigner, an idealist and a crusader against injustice who was never afraid to speak his mind, sometimes (indeed often!) getting into very hot water because of this acute sense of right and wrong. Not only this, Harold was also a highly intelligent man with a tremendous respect for scholarship even though his own education was cut short by the War.

With these gifts – languages, the burning desire and gift for human contact, accuracy in judging people and formidable intelligence – it was not surprising that Harold became one of the country’s outstanding interrogators in World War Two. Even the toughest of German prisoners-of-war would soon find himself forgetting that he was in the presence of an enemy, and instead would swap jokes, or discuss football, or opera, or his children with this new-found friend. Except, of course, that was the skill … very soon the military secrets would come flooding out.

I thought I would share with you an incident which epitomises him. One afternoon in the summer of 1996 a man called Tim Davis was waiting for the 102 bus at Golders Green Station. Now Tim happens to be a member of the Sunbury and Shepperton Local History Society. Even at six o’clock in the evening the 102 is notoriously unreliable. Tim asked an elderly gentleman standing at the bus stop which bus he should take. The reply was “I’m going on that one myself.”

No guesses as to the identity of the elderly gentleman … it was of course Harold and inevitably therefore the conversation did not stop there. Equally inevitably, the chord was struck within five minutes. Tim and Harold chatted and as they sat side-by-side on the 102 bus, Harold asked Tim where he lived. “Sunbury-on-Thames” Tim replied. At that Harold became even more animated. “Would you believe it” he said. “I was at Kempton Park as Adjutant to the Commanding Officer in 1944. The government had requisitioned Kempton Park as a Prisoner of War interrogation camp and preparations were being set up for interrogations after the second front was opened.”

As I said Harold had a deep sense of injustice, of right and wrong. There was the occasion in 1995 when he witnessed a car thief. Others would have not wanted to get involved, afraid for their own safety. Not Harold. At the age of 76 he chased the man and made a citizen’s arrest. The man pleaded guilty and was fined at Clerkenwell Magistrates’ Court the next day. Harold received a fulsome letter from the Chief Superintendent.

Those are just a few things which for me stand out about Harold as a man and as a father. Others will have different memories, of his passion for Bridge, or for golf, or for Spurs (my first memories of White Hart Lane was in that wonderful season in 1961-62) or for Israel or his gift as a teller of stories, often unable to reach the punchline, so much was he laughing in anticipation. In his later years he inevitably slowed up but the campaigning went on, most recently for better facilities for deaf people (his increasing deafness was especially hard for him to bear in view of his passion for human contact). Such a life cannot be encompassed in just a few words, but suffice it to say, life with Harold was never dull, he had strong views and was not afraid to state them. He was truly larger than life and an unforgettable character who will be sadly missed by his family and many friends.