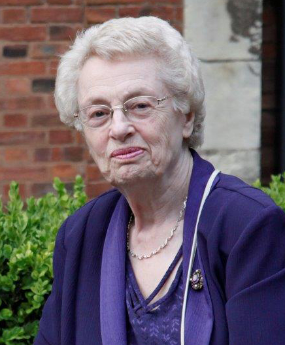 Gaby Stern, was born on 19 July 1924 at 666 Prinsengracht in Amsterdam. However, within a few months the family moved, for work reasons, to Geneva, Switzerland. She was the only child to Ernst Simson and Elisabeth (Lisy) née Fischer. Ernst was born in Dusseldorf to a large family from Mettmann. He worked as a salesman. Lisy Fischer, a child prodigy pianist (wunderkind), had played to audiences throughout France, Germany and Switzerland throughout her childhood and later studied at the Berlin Conservatory alongside Claudio Arau.

Gaby’s mother was a serious lady who focused on her music whilst her father was warm, charming, and full of humour and good repartee. Gaby embodied bits of both of these characteristics.

Although she had lived in Geneva until she married in 1952, both she and her parents had remained stateless up to that time having held German papers prior to World War II. The family were not religious although they were members of the orthodox Jewish community in Geneva, and Gaby attended religion school and had a Bat Chayil. The family, being of German Jewish decent held its breath between the mid-1930s and 1945 as German Nazis and Nazi-sympathisers were frequent visitors to Switzerland.

Gaby was a diligent pupil who studied hard at school and loved the classical music she was exposed to from an early age as her mother gave piano lessons from their home.

The family were of relatively modest means and Gaby related how one evening her mother was playing in a concert which was broadcast on Swiss radio. Unfortunately, at that time, the family did not own a radio and Gaby spent the evening lying on the floor of their flat with her ear glued to the floor as the lady in the flat below did have a radio and was listening to the same concert!

classical music and cello were her passion

Gaby played cello and although she never played professionally, classical music and cello were her passion. She was an accomplished musician playing chamber music every week or so, even up to the age of 87. She was quite discerning as to the musicians she played with, but was also very happy to teach and encourage people seriously keen to improve their abilities.

Career-wise, Gaby had pursued commercial studies and languages which were all important in Switzerland. She learned bookkeeping as well as typing and shorthand in French, German and English and worked for several years for an insurance company, a barrister and for the World Jewish Congress, based in Geneva.

Shortly after World War II, Gaby came to England to participate in a music workshop and to improve her English. She took the opportunity of visiting and staying with Ernest and Margaret Stern and family in Hampstead Garden Suburb. Ernest was the son of Gaby’s great aunt and the family had left Germany in 1933 due to anti-Semitic discrimination. At their London home, Gaby met a young man, Alfred (Freddy) Stern, a cousin of Ernest, and the couple started dating. Freddy had escaped Germany via the Kindertransport in March 1939. All his immediate family from Montabaur and Herborn, had been murdered and this weighed heavily on him.

The couple fell deeply in love and in March 1952 were married in Geneva by Rabbi Safran, the former Chief Rabbi of Romania. Gaby agreed to live in England and after their marriage, they settled in Newcastle upon Tyne where Freddy had found promotion as a plastics technology chemist.

She was constantly at Freddy’s side

Gaby was a patient and doting mother to Gerald (born in 1955) and Tina (born in 1959). Unfortunately, despite her best endeavours, neither of Gaby’s children were imbued with the same talent or passion for music.

Despite her excellent language skills, Gaby never lost her distinctive continental accent which was a hallmark. She was a quiet but very sociable and refined lady who was warm and gracious. Gaby and Freddy were founding members of the Newcastle Reform Synagogue during which time Gaby was a secretary and stalwart of the Ladies Guild and sang in the choir. They later joined the United Hebrew Congregation.

Gaby’s primary devotion, alongside her children, was to support Freddy who had remained traumatised by his childhood recollections of the brutal Nazi regime and the subsequent loss of his entire family. She was constantly at Freddy’s side and supported him in his business pursuits.

Gaby was also a very gifted cook and family and friends always enjoyed and appreciated her legendary Swiss and German dishes such as potato salad, red cabbage, mince meat stuffed tomatoes and her delicious apple cake, streusel and other recipes.

Family holidays were usually spent in favoured mountain resorts in Switzerland where Gaby arranged to spend time with her beloved parents. Gaby and Freddy were even awarded a trophy memento by the tourist office of Wengen for 40 annual visits to that resort.

Sadly, Gaby passed away unexpectedly from a heart condition which was never diagnosed. She and Freddy were one month away from celebrating their diamond wedding anniversary and Gaby was also so excited about the arrival of a first great grandchild.

We are left with the most wonderful memories of a warm and caring gentle lady who fulfilled the role of wife, mother and grandmother in a most perfect way, with a blemish-free reputation and whose memory we will all cherish in our hearts and minds forever.