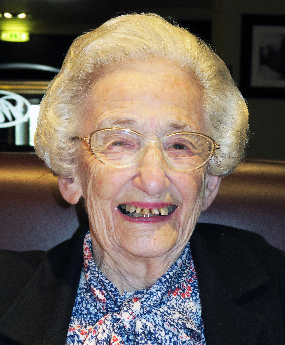 Gabriele Charlotte Stern, known to many as Gaby, or Gabsy by some (to differentiate her from another Gaby Stern in the family), was born on 16 July 1925 in Berlin.

Gaby’s father, Dr Ernst/Ernest Stern, was an economist of international reputation who was born in Montabaur and became head of economics at the Reichskreditgesellschaft, the German Central Bank in Berlin. He was dismissed from his job and arrested in 1933 shortly after the Nazi party came to power, on account of his published political views about the Nazi party. Thanks to a friend at the British Embassy in Berlin, the whole family was able to leave Germany and emigrate to London in 1933 when Gaby was just eight years old.

In England, Sir Henry Strakosch, Chairman of the board of The Economist (the publication) and also of the Union Corporation, a leading gold-holding company in London, appointed Gaby’s father an economic advisor. Sometime later, Winston Churchill, asked his friend Sir Henry Strakosch for help in finding out what was happening in Germany and Ernest Stern was asked to assist. Under a veil of secrecy, Ernest assisted the British Government to estimate Germany’s financial abilities to re-arm and re-equip itself.

According to Churchill’s book “The Second World War” (Volume 1, page 177f), Ernest Stern “reported precise and lengthy detail that the German war expenditure was certainly round a thousand million Sterling a year” and this was duly reported to the British government.

Ernest Stern also helped to arrange the emigration from Nazi Germany of his brothers, Albert and Fritz, thus saving their lives. After the start of the war, Gaby’s parents (her mother was Margaret née Frankenstein), also offered a warm and loving home to Alfred Stern (known as Freddy), Ernest’s first cousin’s son, who arrived in England on the Kindertransport. Some years later, Freddy was informed that all of his family had been murdered in the Holocaust.

Gaby, her younger brother, Ronnie, and cousin Freddy, grew up in Hampstead Garden Suburb where their first home in Thornton Way was bombed twice while they were in it during the blitz, forcing them to move out temporarily to Berkhamsted and eventually returning to live in Ossulton Way.

Gaby attended school in Finchley and later the Convent of Marie Auxiliatrice School in Finchley which much, much later became the Sternberg Centre. After this she went to Pitman’s Secretarial College in London before travelling to California in 1947, at the invitation of a cousin of her mother. She stayed there for over two years doing secretarial and bookkeeping jobs. Her brother Ronnie followed her two years later to pursue a career in flying and he remained there.

she concentrated on work and useful and productive communal engagement

Gaby returned to London and joined what was London County Council at the time, working in the Personnel Department of the London Ambulance Service for five years and afterwards for two years in the Finance Section of the Public Health Department. In 1965 she was transferred to the Public Health Department of Camden Council, working in Social Services and Finance and remaining in their employment until her retirement in 1984.

The death of Gaby’s mother, in 1974, was particularly painful for her as she was a totally devoted daughter. Later, in retirement, she worked for the Jewish Blind Society, organising transportation for members, and was awarded a Life Governorship in 1989. She also volunteered for the Reform Movement’s campaign to support Soviet Jewry and worked at the Sternberg Centre, her old school, one day a week.

In 1987 Gaby joined the Leo Baeck (London) Women’s Lodge No 510 of the B’nai Brith, an international organisation focusing on humanitarian causes, human rights, advocacy and Jewish heritage. Here she made many good friends and rose to become Chair of their Representation Committee. This particular Lodge closed in December 2017, perhaps fortuitously, this coincided with Gaby moving to Sydmar Lodge Care Home due to age and onset of Alzheimers.

Gaby was always the adoring, interested and devoted aunt, cousin, friend and companion

Gaby never married. Somehow, she found forming those sort of relationships complicated and so she concentrated on work and useful and productive communal engagement. Although content with her own company, she was a very also a very sociable person and loved nothing more than to be with family and friends. She was warm and caring and doted on her brother Ronnie, his late wife Barbara and their family in Santa Barbara. She also had an extremely close albeit long distance relationship with her first cousins, Gerti and Henry (the children of Albert Stern) and their children, whose families had escaped Nazi Germany and ended up in Auckland, New Zealand and she made frequent trips to visit Freddy’s family in Newcastle upon Tyne.

She followed every family event and never missed a birthday or wedding anniversary. She thrived on being the very first person to convey significant breaking news, good or not so good, to all points of the globe. Gaby was always charming and usually patient except insofar as she was totally challenged and frustrated by technology. She was entirely selfless and spent little money or time on herself focusing solely on others. She was never cross nor lost her temper despite frustrations she must have had.

As her brother, Ronnie, lived in California, it was Freddy’s family that offered to support her in older age particularly because her parents had given Freddy a home and treated him as one of their own. Gaby was always the adoring, interested and devoted aunt, cousin, friend and companion. She will certainly be forever in the hearts of all her family and remembered with very deep affection.