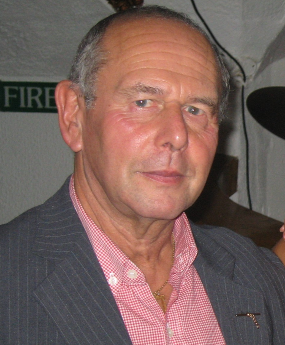 “Everybody loved Frankie”. Kind, positive, chivalrous, intelligent, witty, gumptious. Always gave you the time of day. Always there to give candid guidance and support. Always had a smile on his face. Always looking smart, always colour-coordinated. He never got less dapper with age, and even in his eighties, we’d spend every Saturday wondering whether he was coming for lunch dressed head to toe in bright yellow, pink or teal.

He was, simply, the most wonderful and devoted son, father, husband, son-in-law, father-in-law, grandfather and uncle.

My Dad was born to Jean and Abe Abramson in Leeds on 5 November 1938. “Remember, remember, the Fifth of November, because it’s Grandpa’s birthday” the boys used to sing. He was a war baby and didn’t see his father for the first four years of his life as Grandpa Abe was sent to India as a Medical Officer. It was never something for which my Dad sought pity. He wore it as a badge of pride.

My Granny Jean, a wee Scottish and exceptionally kind lady with seven brothers and seven sisters, brought up my father in Leeds. The family had a successful clothing factory, until unfortunately, the factory was bombed in the war. They moved to Edinburgh, where my Dad spent his childhood with his countless cousins, and surrounded by entrepreneurship; a fish company, a tailor shop. It’s no wonder he had such good business acumen later in life.

innovative, a catalyst for change with charm, full of new ideas

He excelled at academia. A first in chemistry. A PhD in Pharmacology. He matched that with sporting prowess – rugby, squash, golf, swimming and tennis. Clearly a trait that hasn’t been passed down to me! But one thing he did teach me was the meaning of love. He met my Mum whilst he was studying. She was from Birmingham and came up to Edinburgh at the age of nineteen to visit a cousin for the weekend – and they were set up on a blind date. She then went home, told her parents she had met the man she was going to marry, packed her bags and moved into a rented flat in Edinburgh. They were married a year later. And they stayed together, devoted to one another, through thick and thin.

In these very challenging recent years, my mother, Jackie, has been a rock. Stoic, brave and strong. In waiting on my dad 24/7, she has shown true love, and been a true inspiration. I honestly can’t praise her enough for her initiative and support. And with Covid devastating her rich cultural life of music, art, theatre and bridge, you remained resolute.

But this was never a chore, because we owed – we still owe – my Dad a great deal.

As a scientist to banker with a business brain, he invented Nightnurse. He worked at Guinness, which Benji still maintains is the best alcohol brand in history. He worked at the very top of W H Smith, Citibank, Royal Bank of Scotland, and TSB. Career highlights include writing a book on customer relations which was translated into several languages, winning several advertising awards, creating an advertising campaign with Morecambe and Wise – and wearing outlandish ties to high-profile meetings. His colleagues have described him as innovative, a catalyst for change with charm, full of new ideas. He helped so many people with their careers – how many sparks he has fanned into flames and many good things have flowed from that. He spoke to everyone at all levels, whatever their status, often walking the streets of the City to a chorus of “Hello Frank.”

He worked long hours, all over the country. But every time he came home, family was his priority.

Growing up, I remember my father being so caring and creative. I look back nostalgically at photos of my Purim outfits. ‘Michelle ma belle’ was one of them, named after the Beatles song. He made a bell shape out of wire and covered it with foil and poked two holes for me to see out of, so I was the “bell” inside the frame. I must have been about six years old. I was also ‘St Michael,’ the patron Saint of Purim – a whole outfit constructed out of M&S carrier bags and suit holders. After all, his dad was a tailor. Not that this helped him with Benji’s nappies, which often ended up sellotaped on, the wrong way around.

He also organised my birthday parties, which were always highly innovative. And in the subsequent years, he was always incredibly encouraging during my career, offering shrewd advice and often mentoring my closest friends. Dad was an incredible cook. His gefilte fish was famous for those of you who came at Yom Tov and I believe the recipe made it into the Pinner Shul magazine twice! His Yiddishkeit was so important to him, teaching me Jewish values, taking me to chedar and shul regularly. I will never forget him leading Maariv at my Grandma’s shiva.

My mum and I were forced to move house many times because of my Dad’s work. Horsham, Ham, Harpenden, Edgbaston, Bayswater. However, as with so much in life, things come full circle. And they moved to live closer to us in Pinner. I felt like the luckiest person in the world to have both my parents just a mile away. It meant for the last decade, he was able to watch Izzy grow up. Izzy, you have been the light amid a difficult time.

Dad even volunteered at the local Heath Robinson Museum in Pinner Park. His contribution to community. He loved meeting the people and expanding his knowledge.

he was optimistic….gaining joy from simple pleasures

After Dad’s diagnosis with Guillain-Barre syndrome, everything became harder. It left him paralysed for months, and in rehab for even longer. And that’s not to mention his stroke just years prior. The past twenty four months in particular have been a rollercoaster of health issues, which Mum and Dad tackled so bravely.

Throughout it all, he was optimistic. For years, he refused to give in. Each day was a struggle, but also a blessing. Denied from doing what he loved, he resorted to gaining joy from simple pleasures. Watching rugby at our’s on a Shabbos afternoon, eating any food that wasn’t hospital Hermolis, discussing all things science with Alex and current affairs and politics with Benji. He was so proud of his grandchildren’s achievements.

He would tell us not to worry about the minutia. To instead focus on the big picture. To be ambitious, yet fulfilled. Self-assured, yet modest. Industrious, yet compassionate.

He wasn’t into talking about legacy. If he was, he would have secured those royalties to Nightnurse! His legacy, though, is his family. He treated Warren like a son, taking his word as gospel, for better or worse. And he did everything in his power to give his grandchildren a head start in life. To continue his legacy, we have a duty to strive to be the best versions of ourselves. To deliver on that encouragement and reassurance he provided us.

Dad, I’ll miss you. We will continue to make you proud.