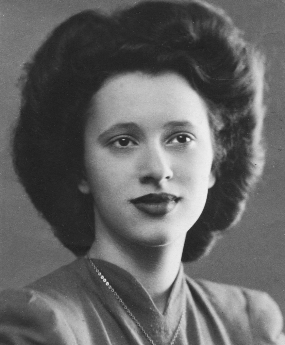 Esther Posner neé Bocem was born on 25 July 1928 in Antwerp, Belgium. Her mother was Rela (maiden name Brodheim). Her father’s name was Shimon, but he was known as Sam. Luckily, as it turned out, her dad wasn’t doing so well in Antwerp, and her mum had an English background, so in 1933 they moved to London, basically as economic migrants. Mum was five years old.

Her dad was one of seven siblings. Her uncle Shloyma was a communist and died fighting in the Spanish Civil War in 1936. The others were married and they all had children. Her aunts and uncles were Rachel, Debra, Hilda and Yunuk. They, and all of their families died in concentration camps. That left Aunty Netty who was nineteen and pregnant in 1939. She was hidden in a basement by Catholic nuns for nearly the whole war. Alas she was caught in 1945 and sent to Auschwitz but survived long enough to be liberated.

The baby survived.That was ‘cousin Helene’. She and mum were close. In fact Aunty Netty and her family, who continued living in Antwerp, were the only close family mum knew who had survived the war. Extended family when I was growing up basically meant my dad’s family.

Meanwhile Esther is five and has arrived in London. One of her earliest memories was of being met off the boat proudly wearing a new white fur hat coat and muff. Her dad was a kosher butcher and her mum found work as a seamstress. They were poor.

Esther was thrilled to start at Stepney Jewish Girls’ School straight away. She was academic and enjoyed school. And she met her lifelong friend Mildred on their first day.

During the war she was evacuated, not very happily, to a number of different homes in Windsor. They still had planes flying over and the school drill during raids was to hide under your desk when the sirens went off. This happened during her matriculation exams (O Levels / GCSE’s), and the invigilator simply stopped the clock and restarted the exam when the all clear was given.

A devastating blow came when for unknown reasons, her father failed to tell her that her mother had been killed in the Blitz. It had happened in 1940 while her mum was at work in Stepney. In fact, her dad had re-married and then taken three weeks to come to Windsor to inform her both that her mum had died and that he had already remarried It was not the most auspicious start for her new stepmother Faye. Unfortunately she did turn out to be a rather wicked stepmother. She forced mum to leave school early rather than take up a scholarship. Esther had to contribute nearly all her earnings to the household, leaving her unable to buy clothes or even personal necessities when she was a teenager. Faye also severely rationed food and was generally a domineering, cold and unpleasant woman.

after all this misery and genuine hardship, Esther’s knight in shining armour appeared

And then after all this misery and genuine hardship, Esther’s knight in shining armour appeared. Introduced by my father’s cousin Phyllis at the Jewish youth club Maccabi. It was immediately a strong relationship. Aubrey was the true love of her life. He absolutely adored her. And boy, did she adore him. They thought they were so lucky to have each other. And they were truly happily married for over seventy years.

And of course they were blessed with two fabulous children! Ruth was born in 1954 when they had been married for three years. When Esther wanted another baby, Aubrey said they just could not afford it. But when mum fell pregnant with her second child two years later, she assured her husband that it would be a boy this time which seemed to mollify him. You see Aubrey was a warm and lovely man but not the most successful financially. So despite being extremely house proud, Esther had to work, mostly part time, but for nearly all of her married life. That did not detract from her desire to be the kind of mother she felt she had barely had. Dad, Ruth and I benefitted from her dedication to be the best wife and mother she possibly could be. This was evident in her endless kindness and support of us whatever we said or did, which in my case must have been pretty challenging!

her friends played a central part in her life

She had an active mind and an amazing memory for details. She was always doing a puzzle of some kind or other, loved word games and quizzes and was still playing bridge a few days before she died. Her knowledge of people’s relationships with each other was legendary. I think that is because, more than anything else, mum was a people person. She loved being around people and her friends played a central part in her life.

She always had many active friendships, though there was a very close ‘gang of six’ when I was growing up – that’s three couples; Aubrey and Esther, Bob and Debby, and Pat and Stamford. Then there was another ten or so couples that were also very active friends. It was a vibrant friendship group and my parents were always busy socialising.

And mum was rather glam. Hairdressing and manicure appointments were regular and sacrosanct. She was proud of her hands and proud of her legs. And OK, I will say it…she liked her bosoms too. She dressed with care, and right up to her death bothered to co-ordinate every item, every time she left her room in the care home, including shoes, handbag, make up and jewellery. And by the way, she even made new friends there too.

Esther was surprisingly adventurous, looping the loop in a glider on her sixtieth birthday, up in an open cockpit gipsy moth complete with white silk scarf flying behind her. She went white water rafting in the rocky mountains, scuba diving in the Red Sea and even ocean bed walking in Mauritius. The only real complaint she had there was getting that famous bosom into the wetsuit. And this was followed by tandem paragliding off the coast of Australia. Aubrey, by the way, stayed firmly on terra firma through all this.

She went swimming regularly well into her eighties, with her special swimming friend of course. She always had energy and wanted to help others. So when she finally stopped working, she started volunteering. She ran a toy library for Norwood in Stamford Hill one day a week for years, very much enjoying the community atmosphere. Norwood realised they had a person of worth here and trained her as a lay monitor. She became their oldest volunteer and was often featured in their literature.

She was also enormously proud of her children. Even though neither Ruth nor I presented ourselves exactly as she would have liked. Even though we shared very few views or interests. And even though Ruth became frum and I married out, she loved us unconditionally.

And she was so delighted with her grandchildren Ben, Naomi, Simon, Sam and Sadie, again loving them all greatly, pretty much without any strings or demands. And how proud she was of her ten great grandchildren Moyshe, Miri, Ashira, Joe, Shua, Jack, Charlie, Izzy, Summer and Lexi. She should have been proud because from everything I have seen and heard, they are quite a remarkable bunch already.

So after a difficult start Esther’s life became full and happy. Her background made her appreciate what she had, and she knew that her marriage was blessed. Mum you lived a long, thankfully fruitful and mainly happy life.

I can never repay you for all you have done for me, and mine. You will be sorely missed.