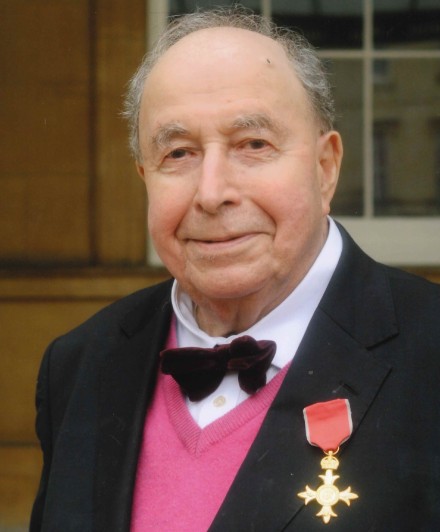 Ernest’s instructions for this service of farewell included each piece of music he wanted to be played, the length of time the funeral should last, the names of those he wished to give the eulogies and which photograph should be used in the booklets that you have before you – a photograph of himself with the FA Premiership Trophy, FA Cup and Community Shield.

The basic facts on the ‘Special One’, as he referred to himself, with some irony, were sparse: born on 21 September 1929 in Prostejov, Czechoslovakia, arrived in England under the Kindertransport scheme in 1939; educated at the Polytechnic Secondary School, Hull University College from 1947-1950 where he was awarded two Honours degrees. He spoke six languages, was Chairman of the Society of Bookmen in 1994 (the year, he wrote, in which Arsenal won the European Cup-Winners Cup, beating Parma 1-0 in Copenhagen). He was presented with the first ‘Lifetime Achievement Award’ by the British Book Awards in 2001 and was awarded the Neruda Medal by the Chilean President in July 2004 and an Honorary Fellowship by University College London in 2006. True to himself to the very end and even beyond his death, he exerted that influence and will that characterised his working life not, I think, with any narcissism, but rather with a sense that, without natural descendants to speak about him when he was gone, justice needed to be done to his considerable achievements as publisher, theatre producer, ardent Arsenal supporter, one man dynasty and recipient of the OBE.

The Ernest I had met and knew a little, was defined by an extraordinary range of contradictions: a man of purpose, choice and astute decisions, but who lived and worked in what seemed to be a monumentally chaotic and disorganised mess of papers and books that weighed down the desk and floor of his office. Engagingly conversational with a wide smile and mischievous sense of humour, he was intensely private about his own life, never wanting to return to the place of his childhood or willing to write about the early years of upbringing with his parents, Richard and Annie Hecht.

While he could be somewhat perplexed when others did not quite march to his drum, there was a certain charm, certainly a charisma about him and he was immensely generous. The number of charities and organisations that benefited from that generosity through the Ernest Hecht Charitable Foundation numbered over sixty. Education for children with autism, programmes for the elderly with dementia, the arts – whether music, books or theatre – sport, hospices, academic and research projects, small and large charities – all were recipients of generous grants towards helping vulnerable young or elderly people.

He had an extraordinary mind – sharp and astute – he micromanaged every aspect of his business and those who worked for him, but at the same time, could consider the broad view and maintained his well-known and acknowledged eclectic list of published books. He would meet a young and ardent supporter of Arsenal, like himself, and the following day a load of books about Arsenal would turn up on that man’s doorstep. When Heschel’s compelling masterpiece God in Search of Man was republished by Souvenir, he was quick to send it to me and over the years, sent many other books on bereavement and dying, that somehow he knew I would be particularly interested in. Nothing escaped his attention: one year, noticing that the Liberal Jewish Synagogue was holding a service for bereaved parents, he sent me a dozen books on the subject to give away to those attending.

The titles of the books he chose to publish and the choice of charities he supported revealed an acute sense of justice, a fine and astute mind, an intuition about timeliness, an understanding about principles and universal connections of great poignancy and depth. But there was also that sense of boyish sense of mischief that was not afraid to embrace the bestseller one day, the arcane or bizarre the next.

‘Anyone can create a high-class literary list of prestige titles,’ he said. ‘It’s better to have a balanced list, comprising books that make money and those perhaps more worthy titles that don’t. My adage is that a publisher’s first duty to an author is to remain solvent.’

a strong sense of moral justice, of regard for the vulnerable and underdog in society

Here was the practical voice of the entrepreneur, the man who – yes – had a slightly inflated view of himself, who could do exactly what he wanted, when he wanted, but whose egoism was curbed by a strong sense of moral justice, of regard for the vulnerable and underdog in society.

Although he remembered the journey by train with his mother through Nazi-occupied Czechoslovakia, leaving her in Prague while he made the long journey to England – she eventually made it to England to join Ernest and his father just before September 1939 – he maintained a curious detachment about his past. And yet, one cannot help thinking that the extraordinary creation and success of Souvenir and Ernest’s determination to preserve an integrity in a world of huge corporate publishing entities, as well as the breadth of vision he had in extending the hand of support and help to so many charities, was his response to the gross injustice he, himself, experienced as a Jewish refugee from Nazi Europe.

Demanding, somewhat impatient, self-reliant and independent, he was a unique individual: courageous, immensely generous, clever, ambitious and determined, original and creative, his death leaves a gaping loss for his personal friends and the publishing world. We cannot quite believe he is gone. His presence was enormous. May all the loves of his life – all those things that provided precious enrichment of the human spirit – art, science, music, literature, theatre, sport, spirituality and religion and much more – continue to endure and flourish under Ernest’s enduring influence.

Zecher tzaddik livrachah. May the memory of this righteous and generous man endure always as a blessing. Amen.