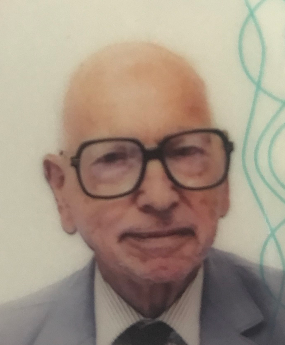 We must celebrate a remarkable man who lived through remarkable times.

My father, also known as Opi, was such a truly remarkable person that I would be doing him a disservice if I did not give you a flavour of his life and personality.

He was born in Hampstead, London, on 24 March 1913, his parents having moved to London six years earlier. A few weeks before he was due to get his naturalisation papers, my grandfather Leo was interned, at the outbreak of the First World War, on the Isle of Man, for the duration of the war.

Just before the war ended, at the end of 1917, the Quakers arranged an exchange with British civilian prisoners of war in Germany and my father and his mother returned to Germany, joined by my grandfather in 1919. My

we didn’t need to Google anything, we had Opi,

father, aged five, was then brought up in Düsseldorf. His younger brother Jack was born there in 1926.

My father lived through turbulent times, the Weimar Republic, the inflation and of course the rise of Nazism. My father was even attacked by Nazi youths in 1932.

With a great deal of foresight the family decided to return to London and returned in 1933/4. My father had a British passport and so his return was unproblematic from that perspective.

I remember my father telling me that he was listening to German radio in the Thirties and even heard his name mentioned as a traitor to Germany – the Nazis were looking for him!

My father met my mother Gerda at the refugee club in Seymour Place, “The 33 Club”, around 1936, over the table tennis table and they eventually married in 1942.

My father became a fireman during the war, based at Golders Green, and I remember him telling me that during the Blitz his unit tried to save his burning office in the City of London, sadly without success.

Already before the war, my father worked in his father’s pulse business in the City, dealing in products like beans, peas, rice – I remember as a little boy calling my father a “pea merchant”. My father was later joined by his brother Jack. My father became a member of the Corn Exchange. He was highly respected and trusted.

After the war he carried on in this pulse business until he suffered a heart attack in Baden-Baden in 1987 and after a successful double bypass operation he retired from business.

During his retirement he gradually became a carer for my mother, particularly for the last ten years of her life until she passed away in 2003.

Opi led a full life for the last six years, loyally looked after by his carer, friend and confidant Peter, who will miss his “governor” greatly. Opi was also supplied with wonderful Italian food by the loyal Angela. These are two fantastic people. And he died from a heart attack that killed him instantly, yes, in a pub in Covent Garden, but not after a pint! He was simply asking directions on his way to the theatre.

So what kind of man was he? Family was so important to him. On the last day we all saw him, Sunday a week ago, he came to lunch, beautifully cooked by Susie, his daughter-in-law for over 35 years. Both his grandchildren, Oliver and Nicole, were there plus Oliver’s wife Alex and of course our little Ella, his great-granddaughter who is now the surviving E Kaufman. Also present were Susie’s parents, Eva and Kurt, with whom we had a special relationship, recommending which art exhibitions to visit on their London trips. In our family we didn’t need to Google anything, we had Opi, otherwise known as the Oracle. Opi had a special relationship with his grandchildren, sending them (and me) cartoons from, of course, the Daily Telegraph, advising Oliver on the economy – his view by the way was that the economy is going to get worse before it gets better. He took an enormous interest in their careers.

And Opi was interested in everything – a true polymath.

I already mentioned his interest in art. Every Thursday he went to town, touring the Mayfair galleries, going to all the exhibitions, taking his friends for lunch at Fortnum’s. He was even consulted by Sotheby’s on German art and invited to all their pre-auction cocktail parties.

Despite his increasing deafness he regularly went to the theatre, seeing all the serious plays. It was so typical of him that he died en route to see Warhorse.

Opi took on a new job at the young age of 94 in charge of the local neighbourhood watch, writing long letters to local councillors and the police

Opi was a voracious reader, reading the Daily Telegraph from cover to cover. He regularly consumed six hundred to eight hundred page tomes, mostly on the Holocaust and German history in general. He was often seen on the long trek to Kenton library, carrying these heavy books in Sir Wilfried, his basket on wheels. Opi had a name for everything and everyone, over 60 names at least for my poor mother.

He loved travelling. He and my mother saw a lot of the world and had friends everywhere. Only two weeks ago he returned from a fortnight in the Canaries, going for daily five mile walks. He did complain, to Alex in particular, about the airports, renaming Luton “Queueton”. He loved the sun and was often to be found sitting outside the front door enjoying the evening sun.

Opi had many friends and we are so happy that his oldest friend (not in age, but in friendship), Helge, is here with her daughter Tamara. They knew each other for 74 years.

A couple of years ago Opi took on a new job at the young age of 94 in charge of the local neighbourhood watch, writing long letters to local councillors and the police, even having the local police constable’s mobile number. There was a burglary recently in Kenyngton Place and my father told me he was very much involved in the inquiries.

He loved community, be it local or national. He was fascinated by politics and was even asked about fifty years ago to be the Liberal candidate when we lived in Pinner. However, he was a modest man and distrusted politicians and declined. I can just imagine his views on this week’s budget!

Opi was the last of the letter-writers. Not for him e-mail. He was a technophobe but all of his close friends and family were in regular receipt of closely typed letters from his ancient typewriter.

I have to mention two more hobbies: His stamp collection was very special, particularly from the former German states. Up until recently he regularly attended stamp auctions in the City.

And finally I must mention his uncle, Alfred Flechtheim, who was one of the most famous German art dealers in the 1930’s. Opi meticulously tried to trace what happened to Alfred’s valuable collection of paintings, stolen by the Nazis, sadly in vain due to the passing of time.

A remarkable man indeed and I have only touched the surface.

Let me end with a story that sums up Opi: It was Oliver and Alex’s wedding. During the Rabbi’s speech under the chuppah, the Rabbi, Shlomo, posed a rhetorical question about good and evil. Rabbi’s do not expect a response. However, Shlomo had not reckoned with Opi. He answered Shlomo, started debating with him on a philosophical level on the meaning of life. No-one who attended the wedding will ever forget that special moment.

That sums up Opi: Bright, articulate, tireless, funny and loyal.

We will all miss him.