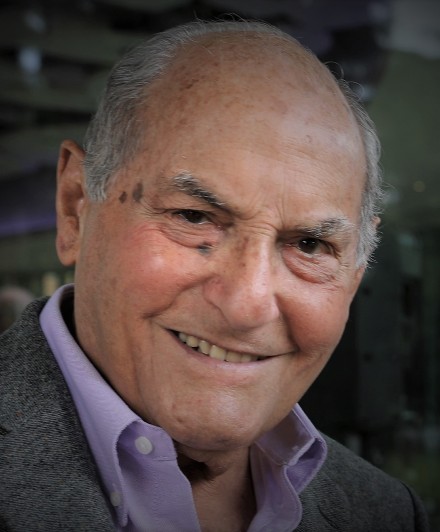 In the last few weeks, I have sadly had to become surprisingly and unexpectedly familiar with the inner workings of my father’s dressing room.

I say my father’s dressing room, but in reality this was an area originally designated as somewhere for both my parents to store their clothes. Through a process of creeping annexation, though, my father had in fact long ago colonised the lion’s share of the available space. Here was to be found his impossibly large collection of menswear. Shirts, suits, ties, and his trademark cashmere pullovers, were just everywhere, in a dazzling display of riotous colour. My poor mother was left to manage with little more than just a shelf or two here or there.

Joseph had a coat of many colours. My Dad had clothes in every colour. Why? I think because he was utterly meticulous in everything he did. He liked to look his best, taking great pride in his appearance. And he brought to his wardrobe the same care and attention that he gave to other areas of his long and fulfilled life.

To his work, for sure, to which he was hugely committed, most notably at his beloved Citroen Wells, where he rose to become a much-loved senior partner. And as a widely-respected member of the accountancy profession, by which he was proud recently to be appointed an honorary life member of the Institute of Chartered Accountants.

a regular minyan member, haftorah singer and kiddush imbiber – and his Purim spiels were legendary

But he also brought this meticulous approach to his many voluntary jobs. Dad really cared. At Central Synagogue, he was for decades a valued member of successive management teams. He worked hard to ensure the shul was always kept on the soundest of financial footings. He undertook a wide range of positions, including the synagogue chairmanship, and liaison with the United Synagogue. He was also a regular minyan member, haftorah singer and kiddush imbiber – and his Purim spiels were legendary.

And the same rigour, integrity and devotion permeated his role as a trustee of numerous charities, including the Friends of Ben Gurion University where he was an honorary Life Governor. He was also profoundly generous, quietly supporting many of the major Jewish and Israel charities. But he was unable, as well, to resist writing a cheque for even the most dubious of charitable causes that cared to drop an appeal through his letterbox.

Born in 1931, Dad was a child during the war. His own father was in the fire service and lived, during the fighting, away from home at the fire station. An only child, Dad lived with his mother Betty and the wider family in the Stamford Hill area.

Dad’s cash card PIN number was, poignantly, made up of the years of his father’s birth and premature death

He was very proud of his father, whom he tragically lost at the early age of just seventeen. I learnt recently that Dad’s cash card PIN number was, poignantly, made up of the years of his father’s birth and premature death. He was also supremely devoted to his mother, for whom he cared and provided throughout her life.

I think his early years were hard ones, but they shaped his determination to succeed. By the time he met and fell in love with Mum in his mid-twenties, though, he was not yet quite the finished article. Hearing that her surname was Burton he made a quick, but incorrect, assumption about her northern retail pedigree. To counter, he immediately appropriated a top-fashion-branded surname of his own, pretending that he was Eric “Selfridge”. This may have amused, if not convinced, Mum, but my grandmother was less than fully impressed: when he made known his intentions regarding her daughter, she sent him packing. He was told he should come back in a few months, with better elocution, and speaking something approximating The Queen’s English. Needless to say, through hard work and determination, he passed that test too.

My Mum, or as he used to refer to her, Doll, was the love of his life and he poured into their marriage the same meticulous care that he did with everything. Married for sixty three blissfully-happy years, they travelled the world together. Nothing, on those numerous trips, pleased him more than an unexpected, and un-paid-for, upgrade. A better table at the restaurant. A mere double room magic’d into a suite. Economy class promoted to Club class. These were the sweetest of victories, rendering the holiday of which they formed a part, so much the better. And all the time, Dad was caring for his Doll, ever-anxious that she was happy and contented. In return, she cared for him, and did so brilliantly, especially over the last few difficult years.

His early Stamford Hill days did, of course, leave their scars. One of these was lifelong, and the cause of so much pain and anguish for him, particularly since the early Sixties. I refer here of course to the other love of his life, the one he held for Tottenham Hotspur Football Club.

I wouldn’t say he was obsessed, but it is true that when Dad first met Richard, the only test he was required to pass was to declare what team he supported. Once he had said Spurs, Richard was immediately “in”, and no other questions needed to be, or in fact were, asked.

It was one of the greatest joys in my life to have been able, in the last couple of years, to drive Dad to games with Richard and one or two of my kids. We would stop off at his favourite sweet shop to greet the owners, who knew him by name and were always so delighted to see him. There, he would buy the pear drops he liked to share with his fellow season-ticket holders at half-time. He was naturally impressed by the scale and allure of the new stadium, but for him, it was never quite White Hart Lane.

Win, lose or draw, the journeys home from Spurs were uniformly less fun, as he analysed for us just why it was that we were, to quote him, “so rubbish”. The atmosphere was usually lifted somewhat though, as we drove back through Finsbury Park, and Dad unfailingly pointed out to the kids the flat where his first girlfriend lived!

My father always had a twinkle in his eye and was possessed of a charisma that made him the centre of attention in any gathering. Conversely, though, he was an intensely private man who was at pains not to show any weakness or vulnerability. Throughout the last few difficult years, I am not sure that he ever told his friends and family just how unwell he was.

In fact, being ill was not something he wished to talk about – not even with the army of incredible doctors and nurses whom he so readily and easily charmed throughout his many treatments. During consultations, he became most interested and animated only if the timing of a hospital visit or procedure might get in the way of a planned trip with Mum to their beloved house in Spain, or to one of the US State Capitols he so liked to tick off his list. His fortitude and equanimity in the face of insurmountable odds were a revelation to his doctors, who I felt saw him as something of a medical miracle. I am so thankful to all of them, and to his wonderful carers, for the amazing devotion they all showed to him.

A family man in the truest sense of the word, as well as Mum, Dad loved all of us, his three children, very much. Once they began to arrive some thirty years ago now, he was also beguiled by, and loved, his nine wonderful grandchildren, of whose achievements he was so justly proud.

Dad’s need and capacity for hard work, particularly in my younger days, which often took him out of the house, coupled with his somewhat old-fashioned attitudes to women in the workplace, did mean that my own early relationship with him was characterised by a generation gap that I would have preferred had not been so wide. The opportunity to be with him at his myriad medical appointments and to help care for him in the more recent past, though, gave both of us a wonderful chance to re-set, and to embark together on a new journey. Helping him to navigate these last few difficult years was for me no hardship, but rather a great privilege and one for which I will always be so grateful. I know that Richard, or as Dad would sometimes call him, “The Handyman” feels the same way.

Dad’s passing was not unexpected or sudden. As modest and quiet as he was in life about his many accomplishments, he finally went quietly. He did so only when he was ready, and we had all had the chance to get used to the idea of a time without him. That makes it no easier, though, to bear his loss. He, and his colourful cashmere, will be sadly and always missed.