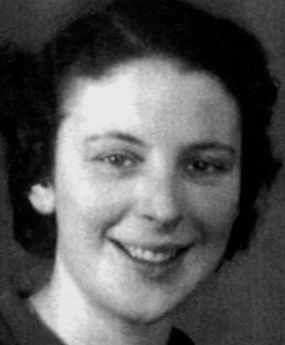 Six years ago, at my mother’s ninetieth birthday party, I spoke warmly about her. It was a wonderfully happy occasion and although today we have a very different reason for being here, much of what I said then remains true.

Although my mother had just two children, Anthony and me, she used to tell us that, given half a chance, she would have loved to have had several more. However, post-war austerity meant that money was short and responsibilities great, so the family grew no bigger.

practical common sense, forthright honesty and loyal and loving concern for the needs of others

Yet, in a way, she did indeed have more than just the two of us. Looking around today I can see cousins and friends, all of my generation, several of whom regard my mother as the nearest thing they have to a mother of their own. Many of them sadly lost their own parents some time ago and frequently turned to my mother for her blend of practical common sense, forthright honesty and loyal and loving concern for the needs of others. Her advice was based on a wealth of life experience and was more often than not absolutely right – although we of the next generation did not always want to acknowledge the fact!

To her “adoptive” children she offered the same warmth, hospitality and care that she gave to her own family. There was nothing she loved more than to have a house brimming over with young people. Without prior notice, delicious meals were conjured up out of leftovers and she thought little of feeding a dozen or more people at the drop of a hat.

This same relationship extended to the next generation. Her three grand-daughters all have husbands and she made absolutely no distinction between them – they were all her grandchildren. She even had “adoptive” grandchildren, as her nephew Peter’s sons and her son-in-law Adrian’s brothers will testify. Her five great-grandchildren all adored their Oma and she delighted in their regular, noisy visits to see her in her spacious flat. A sixth great grandchild is due on Rosh Hashanah. Sadly she will not be there to greet Julia and Paul’s new baby but its time of arrival at the dawn of the New Year reinforces the strong Jewish idea of renewal from generation to generation.

her energy and zest for life were key

What are the qualities that made our mother so loved by her family and friends and liked and respected by all those she met? I think her energy and zest for life were key. Her driving force enabled her to create a new life for herself in a strange country and to make that country her very own home. Her energies were not directed solely towards the needs of her family, but extended to working tirelessly for others – whether they were elderly, disabled or mentally ill. She was a devoted daughter, having her parents living with her for twenty eight years and a loving and supportive wife to my father, Lou, who died twenty two years ago. More often than not her own needs were put bottom of the list.

Her memory for people was absolutely phenomenal.  About ten years ago I was with her in the evening gloom of a street in Temple Fortune, when she passed a middle aged man. She looked hard at him and said, “ You’re Brian aren’t you? You were a supervisor at my Happy Holiday Camp in Hastings in 1955.” She was absolutely right of course.

she remembered the names of every person she met, many of whom she hadn’t seen for nearly fifty years

When she and I returned to her village in Germany some twenty three years ago, she remembered the names of every person she met, many of whom she hadn’t seen for nearly fifty years. They, in response, flung their arms around her in delight, shouting “Kaufmann’s Emmy” and we ended up drinking coffee in someone’s front room with a group of half a dozen old primary school friends.

Our mother’s other amazing quality was her strength, both physical and emotional, especially in times of crisis. In common with many other families we have had our share of misfortunes and on every occasion, without exception, mum was the rock on whom we relied. Twelve years ago, force of circumstances meant that I was back in London on my own, without a proper home. She welcomed and supported me in every way possible, fed me, cared for me and even found me a delightful flat, which eventually became my interim new home. The nine months we spent together in Peter’s Lodge I called “the second gestation period” – in a manner of speaking I began life anew, with a large dose of her positive, fizzing energy behind me.

last Thursday she drove herself and her friend Kurt Marx to an AJR meeting, chatted animatedly to other members and indeed, as was her habit, asked questions of the speaker

Although in recent years her body forced her to limit her activities, her mind, was as active as ever and she took a keen interest in politics and world events. As recently as last Thursday she drove herself and her friend Kurt Marx to an Association of Jewish Refugees meeting, chatted animatedly to other members and indeed, as was her habit, asked questions of the speaker. It was as she was driving home that she began to feel unwell.

She was always fully up to date with the immediate concerns of her family and friends and it was she who maintained links with far flung family members in America and New Zealand. Despite the three thousand  miles of ocean between them, she and her sister Gerda remained in close contact with each other from the time war forced them apart in 1939. Sadly Gerda died last year at the age of ninety. Our mother was the connecting sinew that linked together the body of our family and was a true Matriarch in the very best sense of the word.

One final example of her thoughtfulness, organised thinking and prioritisation of her family. Today is not just the day of Emmy’s funeral; it is also my younger daughter Karen’s birthday. When Karen visited Emmy last week, the day before she became ill, she had already written the card and handed it over to her. Today Karen opened her card. That card is a symbol of how her voice will always speak to us and remain a precious memory in our hearts.