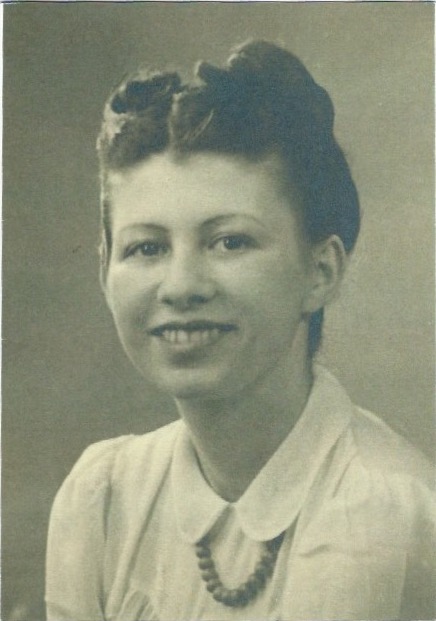 There are many people I would like to thank on behalf of my family.

Some people have travelled an astonishing distance to be here today: from Canada, from Boston, and from all corners of Britain: including a very special group from the village in south Wales where my father lived for many years…

There is someone here who has flown from Germany this morning to be here; and someone else who met my father when he was a Yiddish-speaking refugee arriving in Glasgow in 1940… I cannot tell you how much this means to us.

I would like to thank some extraordinary doctors who looked after our mother with great devotion and care: her GP, Dr. Harverd, Dr. Vivienne Watkins, Mr. Darrell Baker, Dr. Stuart Webb and Dr. Woo.

I would particularly like to mention my sister Becci, who looked after our mother with enormous love and devotion for the past eight years.

And, finally, I must thank a wonderful group of women: Nini’s carers: Cathy, JV, Macrina and Malou. We could not have wished for a more kind and devoted group of carers over almost five years.

Forgive me for asking but is your mother alive or dead?

My mother wanted one thing more than anything in her life: to be mothered, with selfless love and kindness. It is a strange irony that right at the end of her life she found this love thanks to a group of strangers, who came from the other side of the world, who washed her, fed her, comforted her in the middle of the night at moments of unimaginable distress and terror when she no longer knew who she was, where she was or who anyone around her was, when she begged to be able to go home, wherever that was. These women were always there for her, day and night. Always. And except for Macrina who cannot be here today they are all here today.

My sisters and I can never repay their kindness but I wish to pay tribute, here, to them for all they did for our mother.

A few months ago an old friend of my parents said, “Forgive me for asking but is your mother alive or dead?”.

What happens when someone has severe dementia is that they disappear from the world. Only their loved ones know what’s happened to them. It’s as if they have vanished. My mother’s world shrank first to the size of her house, then to one floor in that house, then for the past few years to one room, and then, finally, to a hospital bed in that room.

This is what happened to a woman who had written and edited over a dozen books, who translated German poetry, who published poetry and fiction of her own, who had worked for over twenty years as a doctor and then for another twenty years as a psychotherapist, at general and mental hospitals as well as in private practice, with great devotion and commitment.

there were enough hammer blows for any life.

She died on Friday morning, ninety years old, in peace, in her own bed, free of pain. It was a good ending to years of endless suffering.

She did not vanish. She suffered and a few wonderful people cared for her and tried to comfort her. When some of us call for death with dignity this is what we mean: that people should be spared such a living death.

Nini Herman was born Eleonore Marie Ettlinger. She was born in the most beautiful street in West Berlin, Fasanenstrasse, on 2 April 1925. Nothing remains of that town house now. It was flattened by allied bombs during the war.

She and her younger brother, George, who later became a brilliant psychologist in this country, were the two children of Ellen and Lionel Ettlinger, who separated early on. There is a photo of Nini and George in the order of service: they are in Bavaria, in the 1930s, as young children.

I think it is fair to say that no one who lived in that house in Fasanenstrasse lived happily there. My grandmother’s mother committed suicide when my grandmother was very young. So did one of her brothers. Another relative, the great German statesman, Walter Rathenau, was assassinated in 1922 for being a Jew.

1925 was not a good time to be born a Jew in Germany. Eleonore, known from her childhood as Nini, fled from Germany with her mother and brother and settled in Oxford before the war. She studied medicine in Edinburgh. Her brother studied psychology and physiology at Balliol.

She met and married a fellow medical student, a fellow Jewish refugee, Peter Tarnesby. Together they had two daughters, Ruthie and Sylvie. The marriage did not last. She lost custody of their daughters: the first tragedy of her life, one she never fully recovered from.

In our last coherent conversation, some years ago, she told me her life had been “a series of hammer blows”. This was not entirely true though, of course, this may well have been how it felt at that point as her illness descended. But it is true to say that there were enough hammer blows for any life.

She worked as a GP in the Notting Hill area during the 1950s. She opposed racism all her life and during the Notting Hill Race Riots she put a notice in her window expressing her total solidarity with the West Indians of Notting Hill during those racist riots. For many years she loved shopping in Portobello Road and stallholders still called her “Doctor” with great affection years later.

Around this time, in the mid-1950s, she met my father Josef Herman, another Jewish refugee, a Polish artist, then at the height of his career. Early on, they had two children together: me and my sister, Sara. After Sara’s death, just before her 5th birthday, in 1965, Nini ceased to work as a doctor.

When things were hardest for her family, she held everything together

Selflessly and lovingly, she nursed her husband through a terrible breakdown after their daughter’s death. This was another hammer blow but it was also one of her greatest achievements, seeing him back to work and to life. Everything might have ended then but thanks to her efforts they did not.

Perhaps the happiest moment for them in later years was when they adopted Becci, who they both adored for the rest of their lives. She brought them great happiness.

After returning to London in the early 1970s, Nini re-trained as a psychotherapist, working at St. Bernard’s Hospital and the Charing Cross Hospital, and she began a parallel career writing: poetry and fiction, but also non-fiction, especially books on psychotherapy, including her most successful book, My Kleinian Home.

These years, the 1970s-90s, were without any doubt the happiest and most productive of her life. She and Josef lived together for over forty years. She wrote over a dozen books, saw patients, continued to produce endless memorable meals in her tiny little kitchen in Edith Road.

She nursed Josef through his final illness. He died in 2000. She moved to Golders Green and then around five years ago came the final and greatest blow of all with the onset of dementia.

Perhaps the strangest thing about our family life was that Nini represented normality. The day Sara died in 1966 Nini came home from the hospital and cooked dinner for what was left of her family. It was a valiant attempt to keep some semblance of everyday reality. When things were hardest for her family, she held everything together. She did everything she could to maintain a kind of normality.

a tremendous empathy for people trying to change their lives.

Of course, she was not very normal at all in some important respects. I, perhaps more than my sisters, clung to the notion that she might be normal. But she wasn’t really.

She was also a very difficult person, as anyone with such a childhood and such a life was bound to be. This took a number of forms and many here will have memories of some of these.

But that is not, it can’t be, the final picture. She longed to be a creative person, to write good books, beautiful poems and novels, great translations of her beloved German women poets, especially Nelly Sachs and Else Lasker-Schuler. She sat in her study, typing early in the morning, late in the evening, in between seeing numerous patients, with a tremendous empathy for people trying to change their lives. It was an exemplary working life. An admirable working life.

Admirable… and complicated. Normal and difficult. This was best caught in a letter to Becci and myself from Nini’s dear friend, Levana. She wrote:

“She wanted to give more than she felt she received. Her need to repair was a driving force in her life.”

Over the past days I have heard and read many wonderful tributes to Nini. She touched so many lives. That, too, is part of the story.

I keep coming back to an enduring image. Nini’s mother once told her that she still slept on one side of the bed in case her mother would come back to her. My mother, too, wanted to be mothered, more than anything else. She wanted a perfect mother, the mother of her dreams. I know this sounds strange. Crazy. But I think it is true.

I am not a religious person, but if I were I would pray to someone to thank them that at the end of her life this suffering woman found the perfect mothers she longed for – her daughters, her carers – who long after she could no longer recognise them, looked after her till she died.

In a moment her coffin will pass from us. Then we will hear a lullaby she loved to sing, “My Curly-Headed Baby”. We will leave to another favourite song of hers, “Danny Boy”.

If I had to sum up Nini’s life in one sentence I would say it was about mothers and babies: mothers who couldn’t be mothers and their adored babies – curly-headed or not.

Thank you for coming. Please join us at 9 Park Drive: no longer a hospital room, but now restored to what it should always have been – a home full of lovely things and memories, happy and sad, many of which go back to a beautiful house in Berlin in 1925.