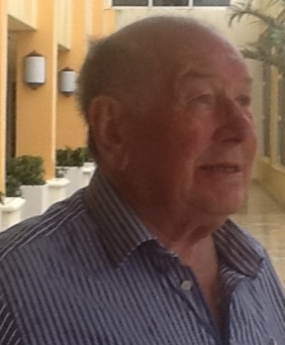 Dad was born on May 2nd 1931 in Kew. Unlike many in the Jewish community, Dad could say that all his grandparents were born in the UK, and some parts of his family had been here for centuries. His parents whilst members of the local orthodox  were anglicised. His father, Henry Gilbert, had changed his name from Goldberg and although not overeducated was a successful upwardly mobile entrepreneur. His mother Julia was the only child of East London glass merchants.

his father had long made it clear that the expectation was for him to join the family clothing business.

Dad was the youngest of three with two older sisters, Stella (who passed away many years ago) and her children all went back with her husband to the USA, and Beryl who is sadly very ill at the moment.

Dad was trundled off to boarding school at the age of 7 and later after not getting into Rugby went to the famous Derbyshire school of Repton where he achieved his school certificate.He might have considered further education, but his father had long made it clear that the expectation was for him to join the family clothing business.

During the war the house at Kew had been bombed. So whilst offices were kept in London, his father moved their clothes factories to Wales to Newtown Montgomeryshire. where soldiers were stationed and the local Jewish chaplain Rabbi Isaac Mattuck of the Liberal Jewish Synagogue was to form a close relationship with them such that after the war they joined the LJS.

After the war the family expanded, maintaining a London base and also owning Houses with farms first at Packham in Hampshire, then at Aston Rowant in Oxfordshire. Holidays and weekends were filled with farm time.

His passion for DIY meant he would always say, “Let me fix it!

He was into horse-riding, shooting,and learning to drive on a farm where his first vehicle was a tractor which he would drive around the countryside before he was seventeen.They enjoyed a full cream lifestyle.

Asthma and hay fever meant that in the late 1940s he was shipped off to Paris and Kansas City, rather than do National Service in the Army, which he had looked forward to joining. This was a vital time for him developing his identity and self-sufficiency. The stories from these periods are now part of our important memories of our father, including tales of the French resistance..

The Marylebone Jewish Society was one of the young Jewish fundraising groups of the 1950s. Many of their friendships were developed from this group and these lifelong friends are still friends today. Here he met mum who came from a traditional United Synagogue family living in Southgate. He whisked her off and altered her plans and they were quickly engaged (after five weeks) and married within a year. Whilst they married at Hampstead United, they moved out to live in Totteridge and initially joined Woodside Park United, before becoming founding members of Finchley Reform, as it seemed to match their requirements.

The 1950s saw the end of farming. His father’s garment business, Gilray and other entrepreneurial ventures such as electroplating stuttered through the 1960s. Through the end of the 1950s and 1960s Mum put her legal studies on hold as all three of us came into the world, but she still managed to finish by the end of the 1960s.

With the passing of his father in 1971 a new chapter of him running his own business and then later using his expertise for other fashion houses began, whilst all three of us went through private schools and on to further education. The 1960s and 1970s hold many memories of family holidays, each with his way of doing it.

His passion for DIY meant he would always say “let me fix it!” He could always find a solution. Although we sometimes teased him about his overuse of plastic padding…

He loved his gadgets and had both early PCs and mobile phones and when the next more updated version of a phone would come along he would have a new one. Some met their demise at the bottom of the Thames having been accidently dropped overboard. A new gadget would always need a plug, so often when you went to use something you had not used in a while you would find the plug was missing!

It is not until 1981 that the Silk story starts when he took over Henry Bertrand with his daughter Katie. And as it grew so Ruth, then David and then Andrew, and later Fabiana joined the team. His extensive knowledge from a background in fashion gave us the opportunity to develop the company from its small beginnings into different markets across the world.

His love of boats had led to many wonderful holidays on the Norfolk Broads and the Lochs of Scotland in the 1960s and 1970s, so when in the 1980s he finally had the chance to buy his own boat it gave him the opportunity to spend time messing about on the Thames with his friends and family. It was a time to be both social and enjoy the challenge of keeping the boat shipshape. He passed his navigation exams and took the boat across the North Sea several times to Holland, Belgium and France.

Henry Bertrand also led to world travel, and many good times, and he was proud of the journey he had led us on. He had slowed down slightly, working until the end, although sleeping at work, and playing Freecell were a major part of the day, as well as opening the post and checking customers on Riskdisk.

He loved working on property, cars and ideas.. He loved a good autobiography.

Weakness for chocolate would often mean that if there was any in the house it would soon disappear! There are certain things that will always remind us of Dad, amongst them Old Dutch cheese and ginger beer.

Over the years he had heart issues starting in the early 1980s, but he kept going and mum made sure of that, and whilst she was the more academic, and the cook he did the diy, and was the driver. To the last he kept going. The partnership was not of people from the same background but a remarkable mix of two very different people from different backgrounds who complemented each other perfectly. Mum plus Dad equalled 57 years of perfect harmony. Now the family are here for Mum, as we consider the huge gap he leaves behind.