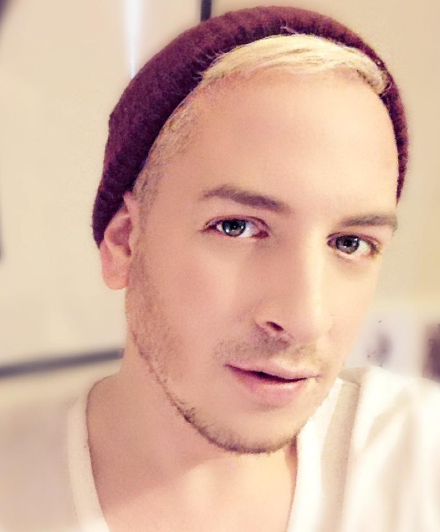 According to family legend, when I was a toddler, I once shot down the stairs, ran up to my mother and cried, “Mummy, mummy, Daniel’s trying to fly”. My mother went upstairs and found my brother perched on the window ledge, gleefully looking out. It was at this point that my parents installed bars on the windows.

Daniel lived all of his life on the edge. He was different. In a family of neurotics, he was carefree, sometimes reckless. He was a unique Beckman in other ways. He was an instinctive musician, a talented artist, a much better dancer than the rest of us. At one point he embarked on a long-running if ultimately fruitless campaign to convince my mother to let him go to dance school rather than university. He is also the only Beckman ever to have delivered a baby, which he did in the back of a Magen David Adom ambulance while on Bnei Akiva Hachshara on his gap year in Israel.

But what united Daniel with other people was as important as that which made him distinctive. He was proud of being Jewish. And he was proud of being gay. And it wasn’t always made easy for him to occupy those identities simultaneously. In recent years,Modern Orthodoxy in England has made

he cooked for his friends when they had children, danced at their weddings, designed invitations and benchers for their sheva berachot.

enormous advances in its attitude towards LGBT men and women. But when Daniel must have first realised he was gay around 20 years ago, it was chillier and more uncomprehending. Daniel was a person of exquisite sensibility. With reason or not, he felt uncomfortable in some communal institutions. Daniel probably felt this more deeply than he would have liked to admit, because he was a naturally conservative person who preferred the familiar. Nonetheless he still enjoyed a vibrant Jewish life. He loved smachot – he cooked for his friends when they had children, danced at their weddings, designed invitations and benchers for their sheva berachot. And even his attitude towards Jewish institutional life mellowed in recent years. Only two months ago, we stood side by side in Dunstan Road Shul to say Kaddish for our mother.

I know much less about the gay side of Daniel’s life. But I do know that he celebrated Pride, formed deep and durable friendships and provided comfort and shelter to those in profoundly traumatic circumstances. In the last few months of his life, Daniel worked part-time in the events department at the Terence Higgins Trust, one of the country’s biggest HIV charities, helping to organise their gala dinner. And he volunteered at Switchboard, the LGBT+ helpline, providing sympathy and support to people in distress.

It is a testament to the values of selflessness and solidarity instilled by both these communities that on Wednesday evening we learned that Daniel was on the organ donors’ register. On Thursday, Daniel gave the gift of life when both of his kidneys were transplanted into a recipient. We are so proud of him.

As many of you know, Daniel had been ill for a long time before his death. He suffered from crippling depression for a number of years that thwarted what would have certainly been a brilliant career in fashion PR. More recently, he was gripped unyieldingly by a drug addiction that ravaged his mind. I will not name them, but there are people here today who have propped up my family

he never lost his essential gentleness

over the last three and a half years. We would not be here without them and there are not words nor time enough to express our gratitude. We are also thankful to others of you who encountered Daniel in torment, and bravely and kindly brought him somewhere safe; and to the many police and paramedics, doctors and nurses who dealt with Daniel over the years and always treated him with tact and respect.

Addiction is the worst disease because the patient will not always acknowledge that he has been infected. But it can also strip a person bare and, in doing so, reveal the true nature of his character. My mother always said that Daniel had cheyn – charm. However far his mind unwound, he never lost his essential gentleness. Though being with him in his worst states was traumatic, I never once felt threatened by him. In fact he often became hysterically protective of his family, striving to save them from unseen dangers.

In preparing this eulogy, I read – possibly for the first time – the Biblical Book of Daniel. The parallels with the story of my brother Daniel jump off the page. There are night terrors and skirmishes with death and men of great accomplishment brought low and warnings unheeded and fantastic parties. Daniel, who for the first part of the book is presented as one of the most authoritative statesmen of his age, is driven almost to madness by the terrifying, lurid visions he experiences. “And I, Daniel, fainted and was sick for a number of days, and I got up and I went about the business of the king but I was appalled by the vision and I did not understand it” (Daniel 8:27).

This impulse for a person to seek the visionary and ecstatic even at the risk of harm was one that the ancient Rabbis knew well. There is a famous passage in the Talmud in Tractate Chagiga in which is recounted the story of four rabbis who went into an orchard. The word for orchard – Pardes – is the Persian word from which we derive the word “paradise”. It is clear that in this instance that it refers to a mystical realm in which God resides. The very nature of the place means that we can’t really understand what went on there. But, as a result of their experiences, one of the rabbis died, one of them went mad, one of them became a heretic and only the fourth – Rabbi Akiva – yatza beshalom, left unharmed. There are two things to note about this passage. The first is that the Talmud gives no indication whether the Rabbis were right or wrong to try to see the Godhead. All we know is that they felt compelled to do so knowing that the attempt might be fatal. Secondly, it is easy to read this passage and assume that Rabbi Akiva was somehow greater than his companions. But there is no evidence that anything was achieved by Rabbi Akiva’s visit. It does not say that he was enlightened or exalted or understood the mysteries of creation. It simply tells us is that he got away with his bare life. The Talmud understood that the greatest people in the world can feel the compulsion to behave in incomprehensible ways for reasons that might be obscure even to themselves.

The Hebrew liturgy is full of prayers. But in truth, there is really is only one prayer and that is the prayer for shalom, peace. For the word shalom is related too the word shalem, meaning completion or wholeness. If you read the Amidah, the daily prayer, you realise that the different prayers – for wisdom, for forgiveness, for good health, for good harvests, for redemption – are really the same prayer: to live a life that is complete, one that exists beyond change. This is why the Amidah ends with the prayer for peace, because it epitomises everything that has come before. But while this completeness can be an aspiration, human existence is defined by being incomplete. For many people this provides their life with purpose and drive. There are always new things to learn, new opportunities to explore. But there are some people who find the incompleteness scourging and terrifying and occasionally overwhelming.

Daniel wanted to love and be loved. As far as I know, his last words were “I love you”. In one of his more reflective moments, he said that, when he found the right partner, he would like to live in the country with lots of dogs – which was odd because I never knew him to take much interest in either the countryside or dogs. My wish Daniel is now, that your life is complete, you find the peace that you always wanted and deserved.

The ending of the book of Daniel is deeply enigmatic. Daniel, having been bombarded by visions, stands bewildered. But the final verse of the final chapter is as applicable to my brother as it was to him. “And you go on to the end and you shall rest and you shall rise up as is your lot at the end of days.” (Daniel 12:13)