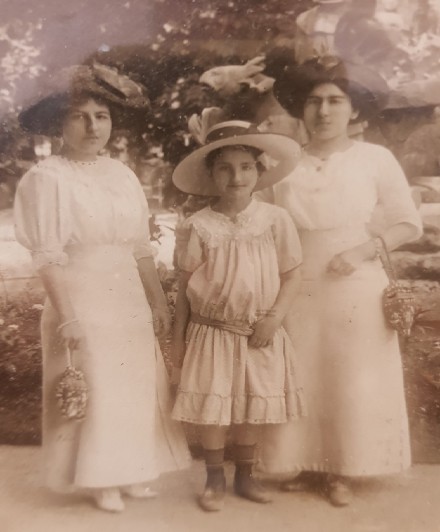 I am not sure how one can do justice to the life of a much loved and respected aunt, cousin and friend in circumstances such as these, when you are unable to get together as a family and when, I am sure, you would like to spend time reflecting on Britta’s long life, her close relationships with each one of you, those who are here and those watching the live stream; a life that began in Austria before the Second World War, her long years of public service as a nurse and head of midwifery in the hospital where she worked, the warmth and care that she always showed for others and her love of history, literature and other intellectual pursuits she enjoyed during retirement, and the last hours in St John’s Hospice where she had been moved shortly before she died last week and where you, Chris, were able to visit her.

survivor guilt and anguish throughout her life ….. did not diminish her capacity for work, for knowledge or her vibrancy as an individual

Britta’s parents were Ernst Moritz Lamberg, a doctor, and Luise (nee Schapira), who was one of three sisters, Luise, Stella and Clara. Britta was Ernst and Luise’s only child, but she grew up living near to her cousins in Vienna and they were a close family. Those who survived never lost that warm kinship they had with each other and a profound, shared and often unspoken sense of loss.

Britta and her parents were deported to Theresienstadt, in what was then Czechoslovakia, and both Ernst and Luise were murdered in the autumn of 1944. In 1978 and again in 2005, Britta submitted a page of testimony to Yad Vashem, the Martyrs and Heroes’ Remembrance Authority in Jerusalem, recording both her parents’ dates and places of birth, their professions and where and when they died in Auschwitz-Birkenau. It is painful to think of her recording these facts that she retained so close to her heart.

That she survived was undoubtedly because for whatever reason, she remained in Theresienstadt and was not deported to Auschwitz with her parents. It must have been heart-breaking for her and undoubtedly the trauma of losing her parents and other members of the family caused not only huge sadness, but perhaps also survivor guilt and anguish throughout her life, although we should add, it did not diminish her capacity for work, for knowledge or her vibrancy as an individual.

She returned to Vienna after the end of the war, but in 1947 came to the UK where a number of her surviving cousins were living – George, Freddie, Hedi and others.

Britta had a strong sense of public duty and perhaps it was that and the fact that her father had been a doctor that made her pursue nursing as a profession. She worked throughout her whole life. In the 1960’s, she travelled abroad and lived in East and West Africa and in St Helena as a nurse with her friend Heather. She spent some time in New Zealand, but eventually they returned to England and lived together in the same bungalow in Wootton with a succession of dogs, including Penny the untrainable beagle.

I know this period of her life is the time that you Chris and Stephen remember her most: visiting Britta and Heather, walks in the countryside – Britta loved walking and used to go to the mountains with her father when she was a young girl.

For a while, she had a camper-van and this was the source of great excitement to two young boys, who saw Britta in a more grandmotherly light than a great aunt. On one visit to what must have been Woburn, there is a memory of stopping to make a cup of tea in the van with its pop-up cloth roof.

Britta became head of midwifery at Bedford Hospital and I think this is testimony to her intelligence, her warmth, a reassuring sense that things will be well, and above all, her deeply caring nature. She was deeply committed to her work and she had a warm and good sense of humour.

After she retired, Britta did an Open University degree in the general arts – history and literature and continued to study through the University of the Third Age. She enjoyed oil painting and classical music and always had Classic FM on in her flat.

She became involved in the Reform synagogue in Milton Keynes not far from where she lived with Heather. She was in many ways an observant and religious Jew, celebrating festivals, attending synagogue – something she did regularly when she moved to London and became part of the Liberal Jewish Synagogue. She knew all the tunes and even when she had lost her memory, she would join in with the singing. She enjoyed a warm friendship with Rabbi Willy Wolff who remembers her with great affection and asked me to mention his huge gratitude to her for her friendship and for many happy memories.

Family was incredibly important to Britta – her cousins, with whom she enjoyed warm, loving and close relationships, her love of major family occasions – weddings and Christmas, her visits to both of you Stephen and Chris and your visits to her. She was always pleased to see you, always took your side and there was a certain Viennese charm in the high necks of the clothes she wore and her love of certain central European food.

Even in later life, when she became quite frail, that warmth always shone through her – with a hug and the thread of a memory that would come back to her if you mentioned a name or something from her past.

Looking at those pages of testimony about her parents that she had sent to Yad Vashem is incredibly sad – she had lost the people who were dearest to her, and yet she built a life for herself in this country with resilience and remarkable courage. I will miss her presence on Shabbat morning at the LJS, always coming slightly late with the lovely Kyi-Kyi who sat next her and who later on, after the service, would bring her little plates of food from Kiddush.

Today, as we say our final farewell to Britta, let us recall her vibrant and warm personality, her caring nature, her love of learning and culture, of being outside and walking, the achievements of her professional life and the love that she showed and gave to each one of us.

Zecher tzaddeket livrachah – may the memory of her life endure always as a blessing. Amen.