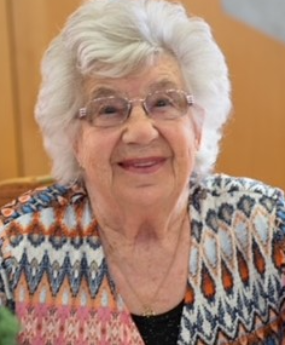 My mum passed on the eighth day of Chanukah in peace and calm, which was pretty much how she lived her life. Whatever needed doing, she just got on with it, no complaints, no drama, just got on with the job in hand.

She was born on 27th April 1926, the first child to May and Vernon Cohen, followed two years later by Harry who tragically died aged 3 from diphtheria, and then Joyce who was five years younger than Beryl.

Both girls followed their mother’s footsteps to the City of London School for Girls, something they were very keen I should emulate.However probably my single act of rebellion as a daughter was to fail my entrance exam, on purpose!

They lived in Muswell Hill and while very secular at home, were early members of the shul, attending the cheder, services and communal sedarim. They were evacuated with the whole school during the war to Ashtead in Surrey and then Keighley in Yorkshire. I have a huge collection of correspondence between the girls in Yorkshire, their mother in Muswell Hill and their father who, not content with having served in the Australian Army in the first world war, volunteered to take up his commission as an officer in World War II.

After school, Mum was called up but my grandmother managed to convince the authorities that she have a local desk job and was based in Admiralty Arch, tracking the movement of ships by filing cards. From here she joined the Midland Bank until she left to join her father in his business, manufacturing corsetry materials and producing the first stretch swim suits which she proudly wore in her swimming and diving endeavours.

As many of you will have heard first hand around our Shabbat table, it was on a business trip to Australia in 1952 that her father passed away following major surgery, leaving her aged not yet 26 to deal with the rest of the trip and the return home.

A few years later, having sold the business, May, Beryl and Joyce moved to East Finchley. Beryl enjoyed golf, whist, horticulture and was a Beauty Counsellor Rep – a precursor to Avon, but she was not content. Beryl wanted her own family and was introduced via an old school friend to our father Sidney, a widower with three teenage children and at that time a sub-postmaster in York Way, Kings Cross. She threw herself into running a strictly kosher home, learning from the Shisler family,a not inconsiderable culture shock, but one which she embraced with love and care.

She worked in the post office, used her floristry skills to decorate countless chuppahs and became a professional bulabusta.

Mum and Dad married in 1962 and I eventually made an appearance in 1965. Around this time she facilitated my dad’s dream to be in the medical world and he trained as an osteopath, naturopath, homeopath and acupuncturist, throughout which she was a willing model on which to practice. She then worked as his receptionist and book keeper for his practice at home in North Finchley. She was also active in Woodside Park Ladies’ Guild and delivered meals on wheels with her sister in law for many years.

a legendary plant stall at the annual Summer fete

Throughout my childhood and adolescence she created a warm and welcoming home, feeding the ever growing family and all my friends. There was seriously never a time I can remember that there was not a meal lovingly produced when anyone visited.

Mum and Dad moved to Barnet in 1995 and were instantly embraced by the Barnet Community, supporting all services, educational and social events.

They would pitch up to every Hillel School event they were invited to and had a legendary plant stall at the annual Summer fete for a few years, nurturing the plants to sell for the PTA and passing on their love of gardening to the next generation.

After losing Dad in 2006 she continued to participate in every Barnet shul education programme ever offered, the Monday Club and Jewish Care Connect in Southgate. She was plagued by pain from spinal stenosis but would never complain despite it severely limiting her independence. She participated in an expert patient programme run by the NHS supporting others in similar situations.

She would always spend Friday night and yom tov with us and loved meeting our other guests. A real highlight for all of us was her Bat Mitzvah in October 2018 which really was very special.

You have always inspired us with your strength, determination and tenacity

The pandemic for her as for many of us had catastrophic consequences. While throughout the lockdowns she continued her daily walks, often round to the Rabbi’s house in Gloucester Road, it severely limited her social interaction and daily activities. Although she was a regular on the Barnet Shul Zoom this was not quite as engaging as real life interaction. Her independence and the fulfilment of her wish to stay in her own home is undoubtedly due to the wonderful carers that looked after her until her recent illness, and we will be forever grateful to them.

I must also thank all the staff at The Stella and Harry Freedman House who have cared for her over the past two and a half weeks. Every single member of staff has been warm, welcoming and genuinely cared, not just for the resident but for the whole family and for that in particular I am deeply grateful. Mum would have so loved the activities there, particularly the planned New Years’ Eve party with alcohol!

Mum, over the past few weeks you have taught us so much. Throughout my life your response to uncertainty has always been “we are all in the Almighty’s hands”. You have always inspired us with your strength, determination and tenacity. But those of us who have spent the past couple of weeks with you have gained some of your faith in hashem, your strength, your bravery to confront that which is not easy or comfortable and the gift of the skills to cope with one of the few certainties of life, our eventual journey to olam haba (the world to come).

Thank you Mum for everything xxxx