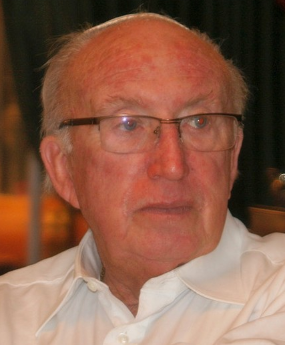 On behalf of Mum, Stephen, Aunty Ruth and Uncle Laurence I would like to take this opportunity to thank everyone for the immense kindness that you have shown us during the past 10 months since Dad passed away.

We have each been lifted by it and it has made the period of mourning very meaningful.

Stephen spoke so well at the funeral and told us about Dad’s life story, in particular the wonderful experience with his entire family present at his hospital bedside for his last Chanukah candles, including each of his six grandchildren who he adored so much and whose presence inspired him through his last illness.

I know my son I know

My thoughts today relate to a story about the words that have been inscribed on the stone which we are about to consecrate.

A few days after the shiva finished, our wonderful mother who had cared for Dad so devotedly started the unenviable task of clearing some of Dad’s papers.

To give you some indication of the scale of the task she faced, Dad was a man for whom retaining a copy of the 1963 gas bill in case of a subsequent accounting discrepancy was as important as keeping a copy of the 2013 one.

On his desk, she found a piece of paper with some Hebrew writing from the book of Bereshit with three particular words underlined.

She was rather puzzled as to its meaning and what the three words signified. As those of you here today will remember fondly, Dad loved to speak in riddles and this was one such riddle where we could not ask him for the solution.

But later that day (the first of many beautiful coincidences) Rabbi Sudak, called Mum to see how she was getting on. She mentioned to him her find on Dad’s desk that morning. Rabbi Sudak explained that he had sent the very piece of paper to Dad as it contained an expression that Dad had wanted to place on the tombstone of his own father after he had died 16 years earlier.

The sentence could be found in Vayechi, the last book of Bereshit, which happened by chance to be the sedra of that very weekend.

The sedra tells the story of Jacob on his deathbed calling Joseph to his side. Joseph brings his two sons, Manessah the eldest and the younger Ephraim, and gives the benediction that we recite every Friday night to sons (may you grow up to be like Ephraim and Manessah),

Joseph, conscious that the right hand was considered to represent strength and priority, places Manessah at Jacob’s right hand and Ephraim by Jacob’s left.

Jacob, although extremely weak and blind, moves his hands around so that his right hand would be on Ephraim’s head and the left on Manessah’s. Joseph tries to stop his father doing this but Jacob refuses this prompting and, using the words that my father wanted to put on Grandpa Issy’s stone, says to Joseph,

the English for which is ‘I know my son I know’

Jacob consciously wishes to prioritise the younger Ephraim over Manessah although he reiterates that each will form a powerful dynasty.

The words ‘yadati beni yadati’ were never placed on Grandpa Issy’s stone as the burial society at Enfield refused to allow inscriptions which were not limited to family names.

So the page lay there buried under piles of paper on Dad’s desk for another 16 years. Although she had never discussed the subject with Dad, Mum decided that she wanted to put the three Hebrew words on Dad’s stone since they clearly meant something to him.

When she told me about the piece of paper I became intrigued and tried to resolve what the answer to Dad’s final riddle might be.

As I read the piece of the Torah in Vayechi more closely, the significance of what Dad may have been saying in relation to his father called out to me.

Dad’s relationship was his father was never an easy one. Issy Grossman, for those here today who did not know him, was a very different character. Dad, was very methodical with a very unique dry sense of humour in contrast to his more impetuous and dynamic father who created a business which supplies nearly every Jewish family to this day with Kosher chickens. As a young man they clashed frequently and, that they managed to work in the same business, was down wholly to the fact that they were working in two factories 50 miles apart.

Their love was strong but I think it fair to say that his brother Lawrence, with whom Dad was extremely close throughout his life, was more akin to Issy. For my father to have wanted to put such an inscription on his father ‘s stone shouted out to me that he felt that the words of Jacob could instead have been utterances of Issy to the effect that, notwithstanding that he was the eldest son, he had a secondary status in Issy’s eyes.

However as I reflected on the story, I could see how so movingly it reflected the story of my father’s own passing and relationship with his own sons BUT with a different ending.

There was no question in my father’s eyes of anything but equal standing between my brother and me – Stephen and I took very different career paths (Stephen into the family business and I into the law) but our father took as much pride and joy from what we each did and how we related to him.

Dad knew both of his sons in every way

Stephen and I spent many nights by Dad’s hospital bedside, I standing on the right side of the bed and my brother on the left.Dad’s very final three words to us were words that Jacob himself says in the sedra (‘I am dying’). Most poignantly Stephen and I were both standing on his right side for the last two hours of his life each holding his right hand as he passed away to a rendition of adon olam. The mezuzah, from his office in Ampthill where he spent his working life counting the chickens in and out, was held tightly in his left hand with the nurses on the left side of the bed.

To my father, his sons were equal to him in life and were both holding his right hand at his passing.

I would suggest that for my father the true meaning of Yaacov’s words,

was in the sense of  being ‘familiar with’ and ‘close to’ rather than in Jacob’s corrective tone to Joseph. It is true that Dad knew both of his sons in every way.

A couple of weeks ago, I told my mother that I had concluded what the words on his desk really signified and that it was a shame the Hebrew expression only referred to ‘son’ not ‘sons.

To which my mother replied that she had had precisely the same thought and that, on the tombstone, the Hebrew words appear as they do in the Torah but in translating them she had written the following English translation that you will all see very soon ‘I know my SONS I know’.

It is a fitting memorial for a good man who as I said at the shiva perfectly represented the saying from the Mishnah: Who is happy? he who is satisfied with his lot.

May the memory and soul of Binyamin Matityahu ben Yisroel be blessed eternally.