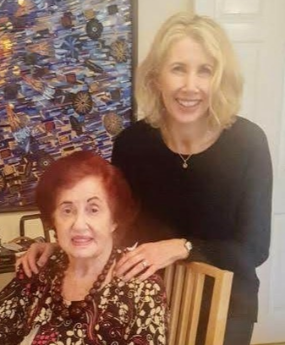 Thank you so much for coming along today to honour our late mother and sister. I’m privileged to have the opportunity to speak about my mother as a representative of both my own and Barbara’s siblings.

Mum was born on the 8th February 1936 in Greenside, a leafy suburb of Johannesburg, in a house that I remember going to with my siblings every Saturday and was the centre of family gatherings for many years, even after my mother’s childhood there.

My mother was always academic and I have been told that Arnold and Wendy her younger siblings, had to creep about the house in fear of their lives when she was preparing for exams. She also loved studying ballet and drama. There was the time when she was rehearsing I believe the role of Nancy in Oliver Twist and being such a good actress, and was doing a fabulous job acting out the demise of Nancy at the hands of Bill Sykes – I think its called screaming blue murder – precisely as the postman sauntered down the driveway. He promptly fled, dropping all his parcels, in his speed to escape a similar fate.

She was well known and loved in many schools from the Jewish schools of north west London to multifaith schools in areas like Hackney.

Mum went on to study teaching at Johannesburg College of Education and taught many generations of primary school children. Later in life, she decided to further her interest in and experience with child development and become an educational psychologist.

She pursued a Masters and PhD and worked as a lecturer in educational psychology at the University of the Witwatersrand for some years. An abiding memory I have of my mother is of her sitting at her big wooden desk in the office and working all hours. Nevertheless she always made time for her 4 children and loved to bake us fantastic birthday cakes. In fact she always had a great love of sweet things, especially pastries and ice creams. You know how some people like to do pub crawls? Well mum used to do patisserie crawls when she travelled, especially to France where her niece lived.

She moved to the UK with my father in 1986 and forged a new career working for the London Borough of Haringey and also Binoh, part of Norwood for many years, specialising in children with learning disabilities. She was well known and loved in many schools from the Jewish schools of north west London to multifaith schools in areas like Hackney.

Additionally she became involved in politics and spent some time as a local councillor for the Liberal Democrats in Haringey.

In her later years she moved to Farthing Court in Mill Hill and enjoyed the company of her late partner Arnold. Many Mill Hill congregants will remember my mum and her carer Issa, who knew all the Shabbat songs, attending shul every Shabbat and Yom Tov .

As a child everyone loved her magnificent curly, reddish auburn hair. In fact just yesterday, Wendy told us the story about how she was stopped in the street many a time to be admired for this.

Once, when she was quite young, someone walking on the street asked for a lock of her hair and they offered the nanny a pound or so. The obliging nanny allowed them to cut a nice big chunk from right above her forehead much to my grandmother’s surprise and dismay when the kids got home.

Till her very last days, people continued to admire her beautiful hair and the wonderful staff at Lady Sarah Cohen House who took such good care of her, would tell me how they loved to brush and style it.

As a role model and mother, she taught us the value of hard work and not allowing anything to stop you achieving, and those and many other positive qualities will live on as her legacy in all of us, her children and grandchildren.