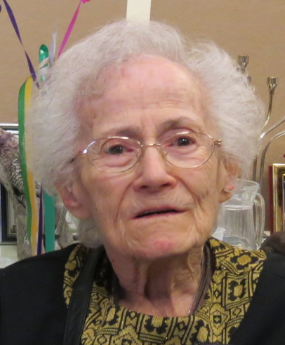 Annelise Clara Goeritz, born 23 November 1915, eldest daughter of Arthur and Anna, sister of Annemarie, aunt to Susan and Yvonne, great-aunt to Raphael, Doron, Talia and myself, and great-great-aunt to Leo and baby boy (Rocky), has expired and gone to see her maker.

I can’t imagine what it must have been like living in pre-war Berlin – through the Great Depression and the horrors of Nazi Germany, events sandwiched between two world wars. But she evidently made it through these tough times and with her sister arrived in the UK in May 1939. Tragically, her parents were never to make it out of Germany.

Fast forward about six decades. In 1998 her husband of 42 years, Uncle Oskar, died, and someone must have wished Li a long life at the funeral. She was then a mere 83. I don’t think that anyone, not even Li, expected then quite how long the rest of her innings would be. Her 80’s whizzed by, she was still living pretty much independently in her bungalow in Mill Hill into her late 90’s. She passed the century mark here with Great Spirit and no less than 5 separate parties. And of course she was overjoyed to receive a birthday card from the Queen. (As an aside, I took it upon myself to produce a replica card for the following birthday, as none was forthcoming from the Palace, presumably due to cutbacks.)

We all thought she was unstoppable. But a fall the following year landed her in hospital and subsequent recuperation at Sydmar Lodge. Here she came to realise that she would be much better looked after in the sociable and stimulating atmosphere than living on her own in the bungalow.

of small stature, but of big heart

And at Sydmar she thrived, because she loved people. (Big thanks to all those at Sydmar for such great care of Li over the years). I think all the staff must have been infected by her friendly, warm and welcoming personality, her cheeky sense of humour and characteristically childish laugh. She was of small stature, but of big heart (and quite a ticker at that!). She was always excited to see family and friends. And she was never happier than when recalling events of decades ago in exceptional detail – she had an impressive memory.

What was it that kept her young all these years? Maybe it was her sense of humour and of fun, undiminished with old age that enabled her to deal with the loss of her parents in such horrific circumstances. Nothing in her English life could have been a fraction as bad as her experiences in Nazi Germany.

Or maybe it was her penchant for a cheeky glass of Harvey’s Bristol Cream sherry. Or as Uncle Oskar called it “her sugar water”!

I racked my brain for a suitable anecdote, but my mind is not full of vivid memories. I recall family gatherings on birthdays and festivals, in Finchley, Wembley and Elstree. And of course high teas in the bungalow packed round the table in their small breakfast room, the sugar pourer and whipped cream spray essential to the feast. In later years my brother Raphael and I would enjoy occasions taking Li out for lunch to a Chinese buffet in Edgware.

One of the traits we shared was a love of gardening, and I would help her manage the garden, sometimes, to her delight, bringing horse manure for her compost heap, which I had collected from the stables nearby. Li and Os had a mini orchard in their back garden – apples, pears, peaches (which she would personally pollinate with a paintbrush if the bees were too slow off the mark), redcurrants, and herbs. She made jams and jellies faster than she could eat them. As my uncle Trevor reminded me, a few years ago she had asked him to buy some jam only to cancel the order. After a root around in her kitchen she had found some redcurrant jelly from more than 30 years ago. Wipe off the mould, good as new. She wasn’t fussy.

And then I found a silly poem which I wrote in 2000 for her 85th birthday and emailed from university. I was evidently disappointed not to be there in person, and beneath the poor rhyme I think this does get to the essence of how I feel about Li.

I shall miss such a treat

For myself you not to meet

One whose beauty surpasses age

Your wisdom is utterly supreme

Your charisma like the gentle running of a stream

Now that you are eighty-five

Keep on living and don’t forget to jive

I’ll be back to London very soon

And when I see you, I’ll be over the moon

So here we are at the end of an era – the last Goeritz, the last of the oldies of her generation in our family gone to mingle with the rest of the cosmos. And now a new beginning, for the baton passes to my mum and Aunty Yvonne as the new matriarchs, who carry the Goeritz genes into the future. I am particularly looking forward to 15 January 2051, when my mum will receive her card from the reigning monarch, whoever that may be.