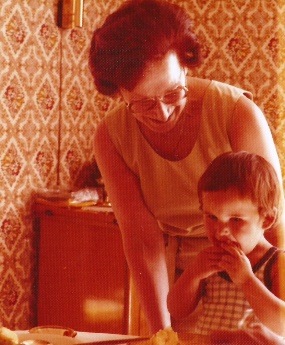 Grandma argued with everyone. For Grandma, to argue was a favourite pastime. She argued with people she knew and people she didn’t know, with friends and family, with Jews and non-Jews, with the living and with the dead. She operated a kind of equal opportunities policy, giving everyone their time of day.

Everything was wrong; it was Grandma against the world. In that way, she was part of a long tradition. A tradition that attempts to understand a key Jewish paradox: On the one hand, we are God’s chosen people. On the other, few have suffered, historically speaking, as much as we have. As Tevye says in one of his many arguments with God in Fiddler: ”Once in a while, can’t You choose someone else?”

Imagine how it was to be Tina Tamara Dratower Bild, Grandma’s mother. Her Hebrew name was Tamar, meaning ”date palm”. She knew her Hebrew Bible, and we can only image how it would have been like for her to read about the Biblical Tamar, who became the wife of Yehudah and the ancestress of King Solomon, who was wise and built the Temple in Jerusalem. Tina Tamara Dratower Bild was born in back of beyond Latskove in Lithuania, had nine children and spoke mostly Yiddish. Before she was killed in Auschwitz in August 1942, she had built a family and a small farmhouse in Southern Norway. In her entire life, Tina Tamara hadn’t even seen a date palm.

She knew that to be fond of something, to love something, was the beginning of losing it

It’s in this ambivalence and longing that the Judaism we have today has been formed. Judaism is in many ways an answer to the absurdity of Jewish existence. So close to God, yet so far away from redemption. For most of our long history of journey and exile, we lived in language. Yiddish – famously described as the national language of nowhere – is one of the most sophisticated and humorous of these language traditions. For Grandma, it was a way of controlling that which couldn’t be controlled.

Consider the expressions that Grandma used. Keynenhore (may you be protected from the Evil Eye), zei gezunt (keep well), mozeleben (and may we live), bis-hundret undtsvanzich (until a hundred and twenty). Grandma always said: ”I’m not proud, I’m happy”. She knew not to tempt the demons who lived on the sitra achra – on the dark, demoniac side of reality. Every time Grandma spoke about her deceased relatives, she always added alavashalom (peace be upon them). Because demons don’t stop at death.

She knew what would happen if everything was too perfect. She knew that to be fond of something, to love something, was the beginning of losing it. If ”they” knew that you loved it, ”they” would take it away from you. Perhaps this is the reason we traditionally break a cup at Jewish weddings: to lessen our joy so that the dark forces are not tempted to exercise their malign powers. It’s a form of metaphysical homeopathy; a small amount of pain now cures a greater, future pain.

To give expression to disharmony, to deliberately lessen our joy, or indeed to argue about why we break a cup at Jewish weddings, then, is an answer to the absurdity of Jewish survival. We live in goles, in Diaspora. Our tradition says that after the destruction of the Temple, even God dwells in exile. We live in an unredeemed world. It is only when meshiachzeit arrives that it will be possible to cease arguing. Diaspora without disagreement is just tourism.

Jewish history is in many ways one long argument. The first thing Abraham did was to argue with God about the fate of the inhabitants of Sdom. When God asked Moses to free the slaves of Egypt, Moses and God argued for an entire week. When the Israelites were brought out of Egypt and were a free nation for the first time in four hundred years, the first thing they did was to argue with God in the desert.

The Talmud is in many ways one long argument lasting for over a thousand years. An argument that starts before the rise of Alexander the Great and doesn’t end until after the fall of the Roman Empire. There are 523 chapters of the Mishna and exactly one doesn’t contain an halachic disagreement. That means that the Sages of the Talmud only argue 99.8% of the time. The rest of the time they agree! Two Jews, three opinions is not a joke, it’s a proud and necessary tradition.

It’s therefore uncanny that Grandma died just before the Shabbat when we read about the reconciliation of Jacob. This is the same Jacob, who made the pot of red lentils, and when his brother Esau returned from the fields and asked for a portion, Jacob answered: ”Sell me the future!” That was Grandma. Who saved and saved and worked below minimum wage long before there even was a minimum wage and gave such generous gifts to her grandchildren Daniel and Liza; because that was to pay for their education, to help pay for their weddings. ”Sell me the future!”

Yet when daybreak came, Jacob and the angel understood that they were equally powerful. Neither of them was able to vanquish the other. Jacob forced the angel to bless him, and the angel blessed him with a new name, Israel. The first thing this transformed Jacob does is to reconcile himself with his brother Esau. They embrace, kiss and cry together.

That is why it feels so right, that it is this parasha we will read each year on Grandma’s yartsayt. May the memory of Jacob’s transformation and healing bring everlasting peace and comfort to Grandma, aleha hashalom.