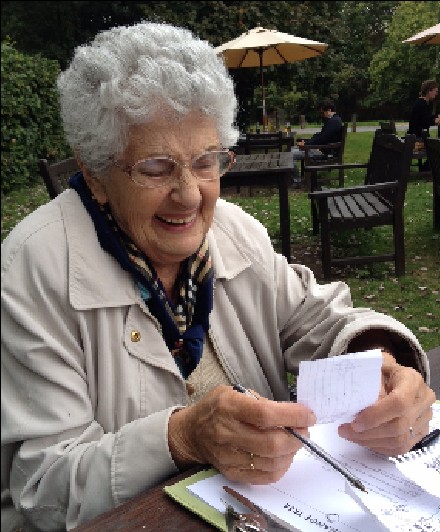 “Your mum is amazing. I love your mum. ” That’s the comment we used to hear most frequently. A lot of you might have made it yourselves. Other people who would make it might be: the man in the paper shop, the cashiers in Waitrose, friends of her children, friends of her grandchildren who’ve met her once for five minutes, someone in a random bus queue.

She was born in Hampstead in 1928 to Swiss parents who came over after the first world war, the youngest of four. The family was very close with two sets of cousins living in different houses in the same street.

Mum’s education was disrupted due to the war but after a couple of unhappy and homesick years in boarding school, she joined her family, who had evacuated to Berkhamsted, and started at South Hampstead High School, which had also been evacuated there. She started to enjoy school for the first time, especially French and piano, at which she excelled, and made some lovely friendships which endured throughout her life.

She loved living in the country. She was responsible for cleaning the chicken run every weekend and digging for worms which she would feed to the chickens by hand.

Some might think that Mum’s life was unexceptional, but we feel she really lived it in an exceptional way.

After the war she spent a year at school in Switzerland and on her return she trained at Mrs Hoster’s Secretarial College for Young Ladies, and then got a job in the advertising department of Picture Post magazine, which she absolutely loved.

In 1957 she was invited to a carefully orchestrated tea party where she was introduced to Ullo Strauss, a clock and watch merchant originally from Berlin. They went to see The Prince and the Showgirl at the Hampstead Everyman, went out on a couple of dates, and two weeks later, to Mum’s surprise, he proposed. They got married two months later.

Mum moved into Dad’s house in Hampstead Garden Suburb and after 18 months Jennifer was born. 18 months later Andrew came along. As he grew up it became apparent that he had severe learning disabilities and eventually he was diagnosed with autism. Mum and Dad did a huge amount to try to help Andrew, taking him to see experts all over the place. As he grew older it became more difficult to care for him at home and he moved into residential accommodation nearby. He came home every weekend, and when this was no longer practical, Mum and Dad visited him at his home. They continued to be very involved in his welfare. Mum’s commitment and devotion to Andrew continued until her death.

On 30th July 1966, the day we won the World Cup, Naomi and Jonathan were born. Mum loved having a big family. It was hard work for her but our parents worked together to create a wonderfully loving and stable environment for us to grow up in.

Mum worked for charities throughout her life. She raised funds for autism charities and also worked for a number of Jewish charities. She manned the shop at the Sobell Day Centre in Golders Green every Monday morning for over 30 years, until a month ago.

In 2003 our dad passed away. They were married for forty-five years and bearing in mind the brevity of their courtship, it was a wonderful marriage and they were totally devoted to each other.

After Dad died Mum picked herself up with pluck and determination and started to create a whole new life for herself, playing lots of bridge, joining the Suburb Theatre Group, and becoming a stalwart member of the Alyth Senior Club which she really enjoyed. She rekindled some old friendships and made some new ones and her social life became a cause of admiration and even envy for her children.

Some might think that Mum’s life was unexceptional, but we feel she really lived it in an exceptional way.

Mum had real generosity and openness of spirit. She spent a lot of time thinking about how to give people pleasure and how she could support them. She would spend hours composing wonderful letters, cards and whimsical poetry to her friends and family. She knitted industriously for her children, grandchildren and sons in law and she loved cooking and baking for others; her range of Swiss and Alsatian biscuits and cakes was legendary. In fact, she had just completed a recipe book for all of her grand daughters in her beautiful characterful handwriting, to make sure her culinary legacy continued.

At the age of 80, she travelled on her own to Argentina to visit cousins,

What mum liked best was connecting with people. She endeared herself to people of all ages and backgrounds through her warmth, interest and informal directness. She had a unique and creative sense of humour and an irreverent and playful streak.

She was a brilliant grandmother to seven granddaughters – her netball team as she called them – Josie, Ariella, Susannah, Esther, Eliana, Neriah and Celia, and she had a special relationship with each and every one of them, which enabled them to be themselves with her. “They are wonderful,” she would say, “and all so different”.

Mum’s extended family was also very important to her. It was her delight and responsibility to maintain relationships with a huge collection of nieces, nephews, in-laws, first, second and third cousins scattered around the world. She did this by phone, post, very long texts, and to her and our surprise, more recently by iPad. She was a beloved lynchpin of the family.

Mum was very independent in her later years and continued to have zest for life. At the age of 80, she travelled on her own to Argentina to visit cousins, and at the age of 88, she was still travelling, driving, making marmalade, and organising and cooking for large family gatherings.

Life without mum is very difficult to contemplate because she was always extremely present in our lives and we are going to miss her terribly, but we do feel blessed that she was able to live life to the full almost right up to the end.