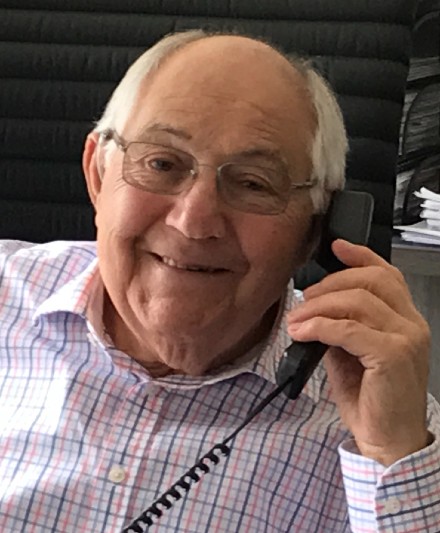 Rabbi Lew. On behalf of Mum, Joanne, Michele, Paul, and myself we have been overwhelmed by all the kind messages and support over the past couple of weeks and in the last 24 hours. The large number of people here today bears witness to the love and respect for Dad, and I am sure he is looking down and, in typical modest style, saying ‘I have caused all this fuss’.

Alan Harvey Massing was born on 3rd December 1932 in Stepney, in London’s East End, to Marie and Bert Massing. He would have celebrated his 89th birthday in just a few weeks’ time. His dad was a tailor, whilst his mum was busy selling fabrics in the markets. They moved to Whitechapel in his early years,

During the war he was evacuated to stay in Virginia Water. After the war years they moved to ‘leafy’ Wychwood Close, in Canons Park, Stanmore. Dad was an only child, something he would always regret and talk about in later years as his own family flourished and grew.

he joined the local boxing club, the highlight of which was meeting the Duke of Edinburgh… on two separate occasions

From a young age, Dad showed drive and commitment in everything he did. He was a devoted son helping his parents cope with the challenges of market trading, and he often shared his many stories of loading and unloading their van of heavy fabric rolls and driving the length and breadth of the country with them. Dad was a ‘latch key’ child. He would help to prepare the dinner and always managed to entertain himself. In his leisure time, he joined the local boxing club, the highlight of which was meeting the Duke of Edinburgh… on two separate occasions.

Academically Dad was largely self-taught. Despite this, he qualified as a Chartered Accountant through a correspondence course and completing his Articles in Tottenham Court Road in a one-man firm, where he rapidly learnt everything. This was his proudest achievement, for himself and his parents.

He used to tell us that his first office was in Leicester Square. Such a tiny room that when he had his new desk and chair delivered there was no room for anything else and he had to clamber over the desk to be able to sit in the chair.

Having had such a tough start in life, Dad was unbelievably proud to be featured in recent years in a financial magazine where he was interviewed as the first of three generations of Massing Chartered Accountants – Dad, myself, and his grandson Richard – not to forget that Joanne married Paul, who was also a Chartered Accountant.

The other most important person here today is our Mum Doreen, who dad called ‘Dolly’ or ‘Doll’, his wife for over sixty three years having just celebrated their wedding anniversary a few weeks ago.

Dad absolutely cherished her from the day they first met at a Maccabi dance in 1953. He told Mum that very evening that he was going to marry her but that she would have to wait a year to hear from him, as he had some exams to get out of the way first. I think Mum had other ideas but Dad was true to his word and as soon as he qualified, he found her again and they got married in 1957.

Together they built a wonderful life and family. I came along in 1959, and Joanne was born in 1966. He was a fantastic father to both of us. Dad did everything for us that he could and told us repeatedly how much he loved his children and family. However bad my school reports were, and there were many, he always found something positive to say.

Dad was instrumental in getting me a place at Cardiff University, a decision that was to be life-changing for me in many ways. When I returned to London in 1981, I was joined by my amazing then girlfriend Michele. We got engaged a couple of years later and were married in 1984. In the meantime, Michele moved into the family home, and Mum and Dad treated her like another daughter. It has been like that ever since.

In 1989, Joanne met Paul and they were married in 1993.Again Mum and Dad welcomed Paul into the family and treated him as another son. Dad cared about them and was so fond of them individually. He always greeted Michele as his favourite daughter-in-law, and Paul as his favourite son-in-law.

And from us there came five grandchildren; Richard, James, Daniel, Sophie and Adam.

Dad was always so proud of his grandchildren and their individual achievements. They have all been blessed with so many of his qualities. He has bestowed upon his family “Brand Massing”, everything is possible, reach for the stars, never accept defeat.

Dad had his own unique sense of humour and always told us the same jokes over and over again, finding it hilarious each time as if it was the first time. There are so many stories to remember; one of the funniest being when he took a very young James on a horse and cart ride, which quickly went out of control. He put James onto the back of the cart, the horse took fright and bolted, whilst the man driving the cart fell off. And so Grandpa jumped to action, chased the cart down the road and regained control. When James got home and shared his adventure, you can imagine what Grandma had to say!

Dad embraced everything and had many varied interests. A long-standing member of Hartsbourne Golf Club he loved the social interactions there and the many friends they made. His finest moment was winning the Harvey cup (his middle name), hilarious because he was the sole entrant due to the dire weather. Everybody adored Dad. He won a trophy with Mum for ballroom dancing and an active member of 2 lodges for over 60 years.

He had the unique ability of making everyone feel at ease. Full of charisma and charm, he lit up every room. A wicked sense of humour and an ability to see the best in everyone and every situation.

It is easy to imagine that Dad’s favourite thing was his family, but the truth is he also loved food…any type of food…except small portions. Chocolate and biscuits were integrally important to him, and we cannot understand how he did not know that we knew of his own secret stash of chocolate kept at Hartsbourne in the fridge.

Here’s to you, here’s to me, and here’s to all the family

He was such a role model for the whole family. Family was everything to him. He was an exemplary son and a devoted husband, father, and grandfather. I have inherited his love of Arsenal, business, and golf. And Joanne makes no apology for being a daddy’s girl. Over the last ten years Joanne and Dad enjoyed “Wonderful Wednesdays” together, going out for lunch and walking the length and breadth of Radlett High Street.

In later years, old age and dementia tried to steal his sparkle but still he managed to find a way to smile through each day. Three years ago, we nearly lost him to shingles and subsequent complications. In true Dad style he battled on and we were fortunate enough to secure a place at the new Anita Dorfman Jewish Care home, which was difficult for mum, but necessary for Dad. Mum, always the devoted wife, used to visit him every single afternoon for tea and cake, until Covid unfortunately caused a prolonged lockdown.

As a family we are all extremely grateful to every member of staff and the love and care that they showed Dad. We know he was calm and happy there and appreciate all their efforts.

Even in recent weeks during his final decline, Dad put us first. We all had a chance to say goodbye to him at the hospital and we believe that he knew we were there by his side. He looked calm and peaceful. He was aware of Richard and Amy’s wedding, the engagements of James to Maddie and Daniel to Ella, Sophie becoming a trainee solicitor and Adam completing his degree.

Dad had his own way of signing off when he was with us. He would raise his glass or cup of tea and say: “Here’s to you, here’s to me, and here’s to all the family.” So, Dad, we are all here today, friends and family to bid you farewell. You will be so missed, but each of us will carry in our hearts very fond and special memories.

May his dear soul rest in peace.