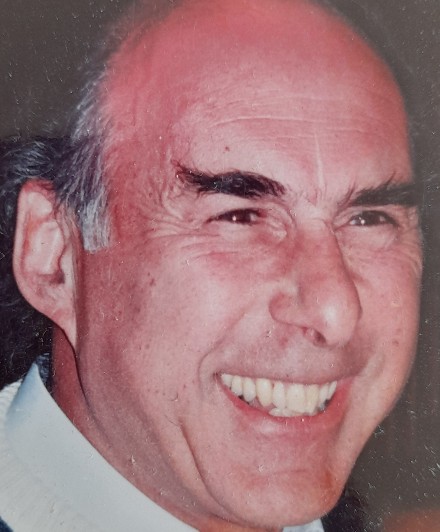 Hesped for Dad’s Stone Setting (with the help of Dad’s memoirs found after his death).

He had no memories of his early years. He never knew his mother (Dolly nee Gotlieb) as she died of tuberculosis when he was aged four or five, around the time of the outbreak of WWII.

When his father,Alfred Kyte visited, Dad’s favourite memory was doing eskimo kisses on his departure.

He was very happy when his father remarried to Claire and at aged ten or eleven, at the end of the war, he moved into a family home for the first time at 15 Broadhurst Avenue in Edgware. Dad’s early happy memories began from hereon.

On the birth of his younger brother Brian, he was thrilled to be given the responsibility of bringing home the new pram.

Dad started at the local primary school and very soon met his lifelong best friend Alan Bass who lived in the same road. Dad commented in his memoirs (that Mum and I encouraged him to write)  that it was a special experience at aged ten or eleven to be able to go to someone’s house. Alan and his family always made Dad so welcome, introducing him to mugs of tea rather than cups.

Later, after achieving his School Certificate he followed the family tradition to go into the menswear business. His first job was with Austin Reed but after a year he was conscripted into the Royal Air Force.

Having had a grammar school education, he was invited to attend an Officer’s Training Course. At the interview, he was asked why he wanted to become an officer and he stated that not only did he not want to be an officer but he did not want to be in the air force at all. He was quick marched out of the room.

Awaiting news of his posting he hoped that like his brother Ivor he would be stationed where he could come home at weekends. It was not to be, and he was soon posted to Iraq. He found this very hard to accept as he felt he had only just settled into a normal family life.

Whilst in Iraq, Dad and the only other Jewish boy in the camp , Len Summers, became friends.

One of the shop owners on the camp happened to be an Iraqi Jew and Dad formed a friendship with him. The man gave him letters addressed to family in Israel and Dad would enclose these in his own letters to have them forwarded from the UK. One Friday night the boys were both invited for Shabbat dinner – where a whole chicken was immersed in a bowl of rice. As an Englishman Dad was totally put off with everyone handling the food from the one bowl.

Dad and his friend also went on a trip and visited Jerusalem and toured the Old City. This must have started Dad’s love of Israel.

Upon his return, aged twenty, he continued to work in the menswear business-Smart Western, then as an agent for Nicholson and others, becoming sales manager at YGM. Dad was always well turned out.

he was always head and shoulders above the rest

As a young single man, Dad spent his free time playing cricket and football and in the evenings joined the Hendon Literary Debating Society. During one of their Chanukah parties, he met and fell in love with one Hazel Joseph from St Albans.

As Dad was seeing Mum back to the station on the night they met there was a poster for War and Peace. Dad asked Mum if she had seen it and Mum hoping Dad was going to ask her out said no, to which Dad responded, “You should, it’s a very good film!”.

They started dating. Mum was excited that she could wear high heels.

They got engaged after Mum’s twenty first birthday and when Dad was twenty four years old they married on 4 September 1958 at Walm Lane shul.They set up their first home in Shrubands Close in Whetstone. David was born in 1960 and I followed three years later. By this time the family had moved to 10 Steynings Way in Woodside Park where Mum and Dad lived for forty five years before moving to Spencer Close in Finchley.

During the earlier years at Woodside Park, Dad was very active in the shul as Chair of the PA, a board member, performer in the shul shows, never remembering his words but adding glamour to the chorus). It was always easy to find Dad in a crowd ,especially in the shul kiddish , because he was always head and shoulders above the rest.I looked up to him in every way.

Dad joined Rabbi Baum’s barmitzah class where he learned the trop and he enjoyed singing the haftorahs in shul whenever there was a gap in the calendar. As family we would turn up as his fan club including when we celebrated his second barmitzvah.

Mum and Dad also learned to play bridge when we were young kids which became a major part of their social life and they made many close friends over the years.

Although, Mum and Dad had to count their pennies we enjoyed a good family life and I have fond childhood memories including family holidays driving to Italy with a tape recorder playing the same pre-recorded tape of our favourite family songs throughout the journey  including Dad’s choice “Blue is the Colour”. Dad was a loyal Chelsea supporter throughout his life.

Usually Dad had a quiet presence, due to Mum doing much of the talking for both of them, which admittedly was one of the main attractions when he met mum. But his presence was nevertheless strong and he has been sorely missed by us all.

On the occasions when Mum travelled to New York without Dad, he would come over for Friday night dinners with my friends and would surprise me as to how talkative he was as he never had a chance to speak much when Mum was around.

In 1988, at age fifty four or five, Dad was headhunted by David to work with him  and then when the office opened in 1990, he ran the back office of his trading business. This was a very happy time for Dad. He loved being involved and took great pride in David’s business and working in the office hearing about how the younger colleagues spent their weekends and so on. When Dad was seventy six David decided it was time for Dad to stop work and enjoy his senior years , which he did. He loved cruising and travelling around the world to many exotic places and was always grateful for these experiences.

He enjoyed many JNF legacy mission tours of Israel and was a keen supporter of so many charities, especially Maccabi.

In his retirement, he also volunteered to be involved carrying out mock interviews with school kids which amused him.

More than anything, Dad took great pleasure and happiness from the increasing family – the birth and bnei mitzvot and marriages of his grandchildren, Jamie to Yaelle, Ilana to Rob, Max to Sacha, and Gila (not yet married!) and then  more recently the joy of great grandchildren -Riley, Jake, Ella and Jo,  sadly missing out on meeting Frankie or knowing about Ilana’s “Bump”.

As for me, I have no doubt that my greatest achievement in Dad’s eyes was having Gila, and being retired he took great joy in seeing her daily progress in her Jewish and secular learning and watching her develop. He had missed seeing David and my daily development due to his then working life.

Clearly, David and I had our different relationships with Dad. Dad enjoyed sharing football and work stories with David. For me, Dad was always there to look out for me. As a young new driver he would come to my rescue when I ran out of petrol and his care and concern for me continued throughout his life, always concerned for my welfare and supportive of my life decisions.Sometimes he was despairing about how I managed my life, more chaotic than him, relieved and proud when I married Jonathan. I was very blessed to have walked down the aisle with my Dad.

a gentleman and a gentle man

And so how do I feel nearly eleven months on from Dad’s passing?

Thankful to have had Dad as my father and for the good reputation he has left behind.We heard from so many people about how they regarded him, including the postman, the porter in their block of flats, the woman from the pharmacy who brought over prescriptions, each of whom spoke so highly of Dad as he treated everyone with the same interest and respect. He had time for everyone.

Sad that we will be celebrating Gila’s bat mitzvah next week without Dad being physically with us.

Grateful that Gila is of an age when she will have her own strong memories of her lovely relationship with Grandpa Ally calling her by his special nickname, Gilly Gumdrops, and she will no doubt always remember him saying ‘Come on ‘Aze!’ whenever it was time to leave.

Humbled, that despite Dad’s early years of lacking any family life, he was always positive and able to give us the love and care that he had missed himself. Even in his last days he asked that we take care of Mum.

Overall, blessed that Dad lived a long and good life.

There was a common thread in the messages we received from friends and family: Dad was a gentleman and a gentle man – and so these are the words we, his family, have chosen to have inscribed on his memorial stone and which we all agree befit the man I am so proud and privileged to have had as our father and husband.